Honestly, if you haven't checked out r/ScottishPeopleTwitter, you're missing out. The subreddit showcases the best of what Scottish Twitter has to offer, sharing the region's unique take on the English language, often imbued with a sense of wit and charm that you won't find anywhere else. 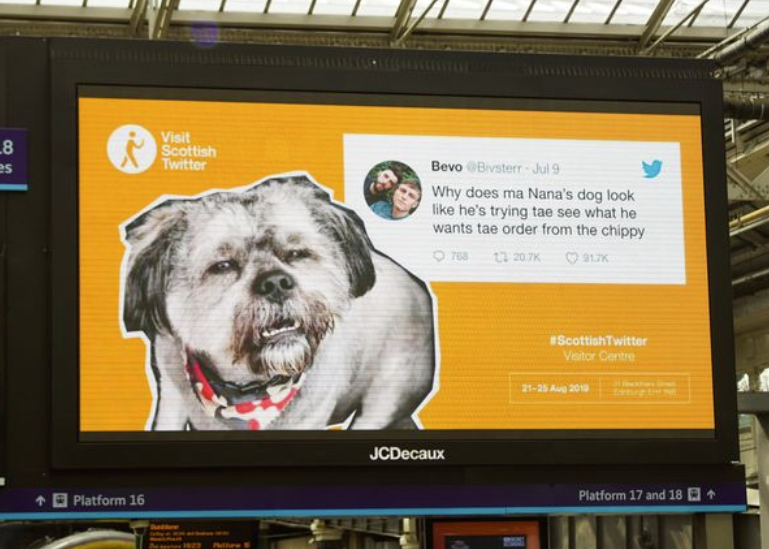 This train station ad is part of a new campaign from Twitter, as part of Edinburgh Fringe, which looks to celebrate the best of Scottish Twitter in a temporary Scottish Twitter Visitor Center, which will be open till the 25th of August.

Welcome to the #ScottishTwitter Visitor Centre, all welcome (except yer da). pic.twitter.com/uKmdroifa0

"To coincide with one of the world’s largest comedy festivals, the Edinburgh Fringe, and as a salute to the globally loved #ScottishTwitter conversations, Twitter is opening an immersive visitor center on the doorstep of Edinburgh’s famous Royal Mile. A first of its kind, the center will celebrate the breadth of Scottish Twitter, and will feature a stained glass window adorned by national treasure Lewis Capaldi, evocative Tweets reimagined as oil paintings and cross-stitch, and a timeline celebrating the greatest #ScottishTwitter moments on the platform."

#ScottishTwitter's escaped from the internet and ended up in its very own Scottish Twitter Visitor Centre.

During the activation, Twitter will also team with local comedians to award Scotland's funniest tweet, as part of a broader celebration of what the more light-hearted side of Twitter is all about.

And that is an element worth celebrating. While social platforms do, inarguably, have negative impacts, and much of the media coverage around social platforms has rightly focused on data security and misuse in recent times, social media has become the interactive mainstay that it now is for so many users because of its positive impacts, its capacity to connect us and make us laugh, keep us up do date with friends and loved ones and expand our world.

Matching those benefits against the potential negatives has gotten more and more complex, but there is a lot to love about social platforms, there's a lot of positivity and benefit to social media connection.

The celebration of Scottish Twitter is a showcase of this, and a much-needed, light-hearted moment in amongst the broader sense of impending doom.