Twitter is moving ahead with the next phase of its creator monetization push with users now able to apply to test its coming Super Follow and Ticketed Spaces options. 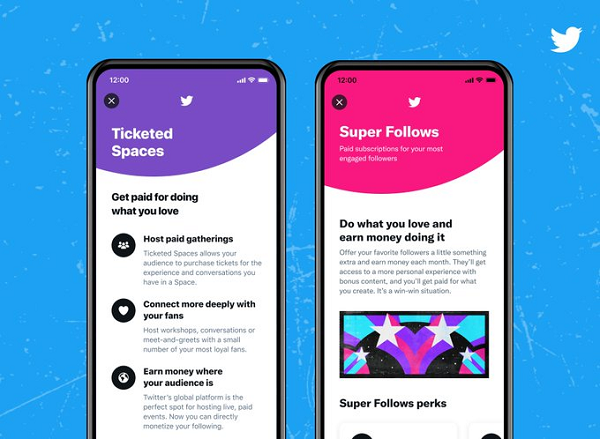 "At Twitter we want to help people make money, and give them tools they can use to be rewarded for their work and feel supported by their audience. We’re looking for a small group of people to be the first to try Ticketed Spaces and Super Follows with their audiences and share feedback. Help us test and improve these experiences before they launch more broadly in the coming months."

Twitter has been developing both options for some time, with the platform first announcing the expanded monetization tools at its Analyst Day overview back in February. Since then, various in-progress iterations of the design and layout for each have been shared by reverse engineering expert Jane Manchun Wong, providing a preview of what we can expect from the options.

Now, Twitter's sharing some more insights into the working models for the functions, as part of its new application process.

First, on Ticketed Spaces - as you can see in this image, users will soon be able to charge for exclusive access to audio Spaces sessions, with variable ticket price options. 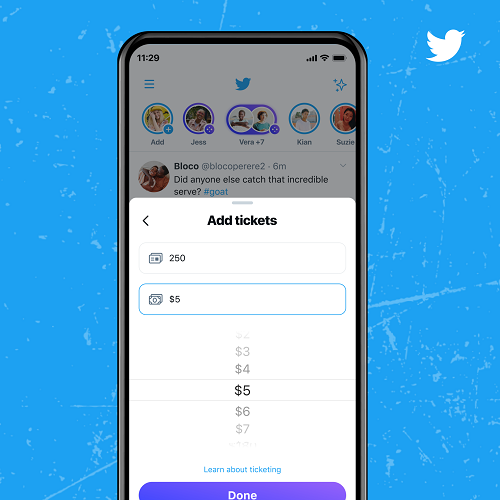 Audio social has become a key trend, lead by the sudden rise of Clubhouse, and now, Twitter has seemingly taken the lead in the race, with the broader exposure potential of Spaces, based on Twitter's established network, proving a strong lure, and Twitter opening up the option to all users with more than 600 followers in the app early last month.

Ticketed Spaces is the next step, providing more monetization potential for creators. While Super Follows, meanwhile, will also enable users to charge a monthly fee to give fans access to a range of additional content and engagement features, like newsletters, exclusive live-streams, product discounts, etc. 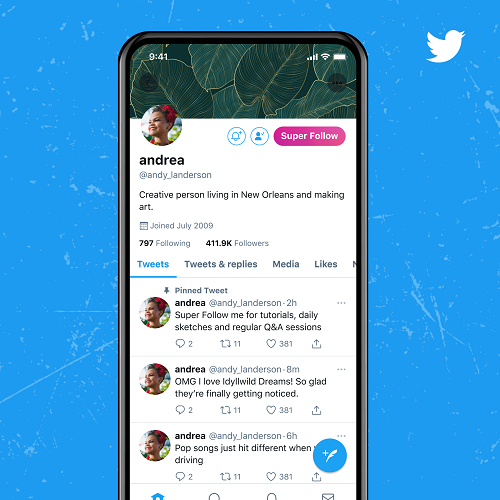 Both will facilitate new opportunities for creators, and incentivize them to establish a stronger presence in the app, which will help Twitter improve engagement overall, and ideally, grow its audience significantly over the next few years, in line with its stated targets.

But there may be some cause for concern as to the longer term growth implications of the options, given the stated revenue-share cut, at least at this stage of testing.

As Twitter explains, creators will be able to take a 97% share of the revenue they raise from Spaces ticket purchases and Super Follows, up to a total of $50k.

From there, there's a big jump in Twitter's intake:

"Twitter won’t take more than a 3% share until you exceed $50,000 in lifetime earnings on both products. After this point, Twitter’s share increases to up to 20% of future earnings."

That's a steep incline - but realistically for most, reaching $50k won't be an option, and even at that rate, creators will still be able to earn significant income from their efforts.

That said, why Twitter is pushing such a big rise is not clear (other than bringing in more revenue, of course), and it could put a cap on the growth potential of the option, and limit the full scope of earnings for creators in the app. Twitter could, of course, revise this approach in future, but right now, that seems like an impediment on the full potential of the option. At the same time, it is worth noting that YouTube also charges a 30% toll on membership fees, while Twitch takes 50%.

Also worth noting that the stated 97% stake doesn't account for app store charges, which will already reduce that intake further.

In the case of the App Store, this element is currently being challenged by Epic Games in its court case against Apple - but the situation being as it is, right now, that would mean that, with additional App Store charges, if you set a ticket price for your Space of, say, $5, $2.80 from each ticket sold would go to you, 70c would go to Twitter, and $1.50 would go to Apple/Google.

Given the various elements at play, it may not be the path to riches that many had envisioned. But still, it's another opportunity, and it is still in testing. Many changes in process could happen between now and a full launch in future.

Right now, users in the US are able to apply to be part of the test pool for both Ticketed Spaces (iOS and Android) and Super Follows (iOS only).

"Applications to try these products are separate and are available on mobile at this time."

You can apply for Ticketed Spaces here and Super Follows here.

And while many Twitter gurus will no doubt be keen to add the Super Follower button to their profile to see how many people will sign up, it is important to plan out your additional offerings in this regard. People won't be signing up just to read your precious tweets, no matter how valuable you think that basic information is, so you need to be offering more to lure that extra spend, and build a paying subscriber base, as opposed to simply banking on the strength of your community, and hoping, again, that it'll drive you towards your millions.

Because, for various reasons noted above, it probably won't, no matter how valuable you believe your content to be. The true measure will be in how much value you can provide your audience, in addition to what you currently do, or the guests that you can bring into your Spaces that will draw a crowd, each of which will present a challenge in itself.

But for those keen to give it a shot, applications are now open. Get ready for the prompts to tap that 'Super Follow' button to start flowing through your tweet stream.