Twitter is looking to take the next steps with its audio social push by expanding Spaces hosting to all users in the app.

if this is your first time hosting, welcome! here’s a refresher on how pic.twitter.com/cLH8z0bocy

Now, it’ll be an all-in – which is good in one way, in that it will provide increased capacity for people to communicate in more formats on the platform. But it adds more challenge in another, because while giving everyone access to such options sounds great, the actual logistics and technical process of then guiding an audience to the most relevant discussions, in real-time, gets a lot harder when many more conversations are happening.

Twitter’s still working on this – it added topics for Spaces last month to help maximize Spaces matching to interested users, which it tweaked again this week with the added capability to edit tagged topics in scheduled Spaces. 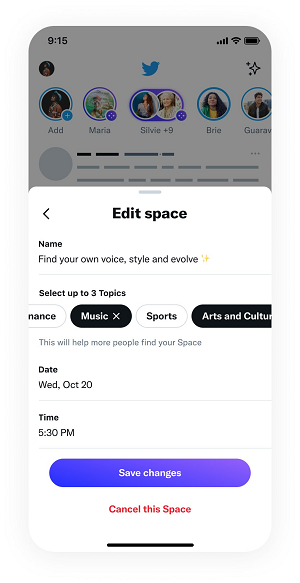 It’s also still rolling out its Spaces tab to more users, which will better highlight in-progress chats, at any time of day, aligned to your registered interests (who you follow, topics, etc.).

That, ideally, will help Twitter get the most value out of the option, by showcasing the best, most relevant chats to every user. But again, as more broadcasters come online, which inevitably also means more bad broadcasters, and spammers a well, it’s going to take some effort to refine its system filters, and ensure that it can put the best Spaces for you into your feed.

Which is where Facebook is likely taking a better approach, by only rolling out its audio rooms to celebrities and influencers, and within groups (and also now selected SMB Pages), which will better enable it to ensure that users see only audio rooms that are of relevance to them. Reddit has also taken a similar path with its audio social option - so while Twitter and Clubhouse are, seemingly, the leaders in the audio social space right now, it remains to be seen whether people will stay interested in the option if both apps aren’t able to keep providing linkage to the most relevant content.

If people head to the Spaces tab and find junk, it won’t take long for them to stop trying. The same goes for Clubhouse. Facilitating broader connection is one thing, but sorting the wheat from the chaff is another key element, and we’ve already seen with the rise, and then decline of video live-streaming, that this will happen, people will stop paying attention and logging into these apps and platforms if all they keep seeing is the same rubbish over and over again.

Which makes perfect sense, and Twitter is still a way off rectifying this element.

So while it’s good to see Spaces expanded to more people, it also adds to Twitter challenges in sorting audio content to maximize consumption.