Twitter has shared its latest performance update, which shows a significant increase in ad spend, after a decline last quarter, and slower growth in total users.

As you can see, Twitter's usage was flat in the US, but it was still able to add 2 million more users in other markets.

That's a significant slowdown on Q2, which saw it add 20 million users.

So why the slower growth? That's hard to say - Twitter is clearly the platform of choice for many politicians, and you would think that it would still be able to keep adding users as the political discussion ramps up around the election. In that sense, the flat growth in the US is a significant concern - if Twitter can't add more users when the sitting President uses it as his soap box of choice, how can it engage more Americans?

For its part, Twitter has (logically) focused on the positive - 188 million represents 29% year-over-year growth, and its continued efforts to add new tools to assist in content discovery are seeing an uptick in interest.

"We continued to grow the number of Topics people can follow to more than 5,100 in Q3, up approximately 25% quarter over quarter, with increased personalization of each Topic and an expanded variety of Topics, including more news and location-based Topics. The number of accounts following Topics also grew significantly, reaching 70 million by the end of Q3, up 40% quarter over quarter. Increased Topic relevance drove incremental favorites, Retweets, and account follows, all important indicators that people engage more on Twitter when we make it easier for them to find relevant information."

So Twitter's efforts to make its platform easier to use are working, it just needs more people to try them out. That seems like an element of concern, but then again, weight against its revenue stats, it's hard to say how significant that concern might be.

On the revenue side, Twitter saw a big uptick, bringing in $936 million, up 14% year over year. 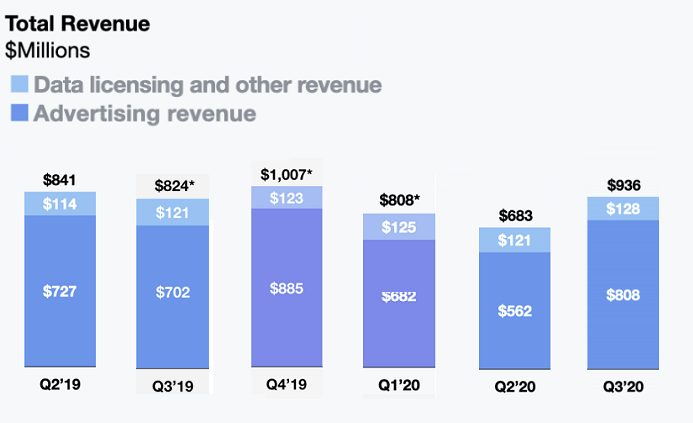 "Advertisers significantly increased their investment on Twitter in Q3, engaging our larger audience around the return of events and increased product launches."

Indeed, Twitter's real-time nature seems to have grabbed the attention of those brands looking to tap into relevant conversations, likely because without social events and functions, Twitter, and other social platforms, is where people are connecting.

How sustainable that is, of course, impossible to say, but if Twitter can present itself as a solid advertising option, even with a smaller overall audience, that could negate some of the concern around that slower user growth.

Also, in 2020, who knows what's normal - who can say whether Twitter will increase or decrease that active mDAU count in Q4 based on this data?

Along those lines, Twitter has also attached some warnings:

"In Q2, many brands slowed or paused spend in reaction to US civil unrest, only to increase spend relatively quickly thereafter in an effort to catch up. The period surrounding the US election is somewhat uncertain, but we have no reason to believe that September’s revenue trends can't continue, or even improve, outside of the election-related window."

So, maybe there'll be impacts after the election. Maybe not. No one knows just yet.

"Primarily due to higher personnel-related costs as we continue to focus our investments on engineering, product, and design, and higher facilities and supporting overhead expenses."

Another element to watch.

So a bit of a mixed report from Jack Dorsey and Co., which largely reflects the volatile state of everything in 2020. There are clearly some good signs on the ad front, but whether Twitter can maintain them is uncertain, while slowing usage could be a problem, but may also be reflective of the times.

We'll have to wait and see what happens in Q4 before we can extrapolate any real insight into Twitter's strategic direction.