Twitter is a cultural phenomenon, and while it may not have the user count of Facebook, or even Instagram, its overall influence is clear. That makes it a great platform for brand campaigns and initiatives, particularly in the awareness phase - but utilizing Twitter for brand building is about more than just setting up an account and tweeting links to your latest updates.

Sure, you can do that, and depending on your business, that might even work to a degree. But businesses looking to glean more from the platform need to go a little deeper, need to think a little more strategically, and plan out their tweeting approach to get those major, viral tweet moments that can increase their cultural relevance.

So how do you do it? This week, Twitter has provided a new listing of examples and strategies to consider when planning at your tweet approach. The outline - titled 'Influencing Culture' - explains the thinking behind some of the biggest, most well-known tweet campaigns of the past few years.

First off, a key point of emphasis in Twitter's overview is listening to your audience.

"Anywhere people go to talk, brands should go to listen, and Twitter is a powerful resource for marketers that want to know what their audience thinks, without relying on claimed data from surveys or stilted focus-group conversations."

By tuning into the conversations - not just your brand mentions, but broader discussion of industry trends and happenings - brands can identify key discussion points, and then monitor them to get to the core of their meaning. They can then use that conversation momentum to flip it into more effective, appealing campaigns.

One example Twitter highlights comes from Burger King, which used negative tweets about Wendy's removing spicy nuggets as ads, of sorts, for its own variation of the same. 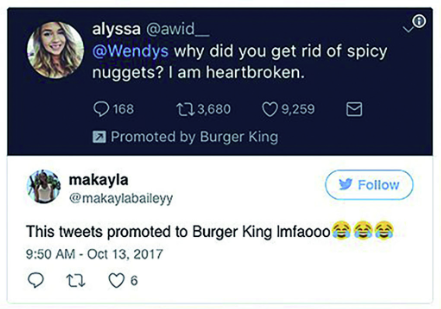 Strategist Michael Cassell, who worked on the campaign, says that the agency devised the strategy in response to audience chatter via tweet.

"There are big, huge moments that everyone tries to get on top of, but then there are a lot of little moments that a good chunk of people care about. When we’re looking up conversations, we start by looking at those little moments. We create clusters of different passion points and we monitor them, and when something is sparking within that passion point we try to have an opinion there."

It's an interesting note, both in regards to the power of social listening, and in how to utilize those efforts effectively. Taking in the surrounding conversation doesn't have to lead to a massive, light-bulb, viral moment, but by looking to tap into a range of smaller movements, with dedicated campaigns and promotions, you can build your own brand momentum, and win fans, helping to spread the word even further.

That same point is actually underlined in another example from Wendy's itself. In regards to the #NuggsForCarter campaign - which included the most retweeted tweet of all time - Wendy's notes that it came about not because of a dedicated, singular approach to a key moment, but because the brand monitors a range of related discussions, and looks to tap into them where possible. 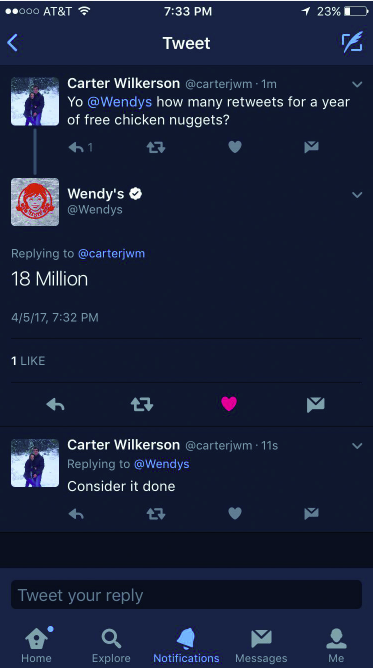 "People think about it as a lucky break for Wendy’s but [strategist Jen] McDonald describes it as something that only came about because Wendy’s had patiently built a base of fans, through fun little interactions that got people laughing and talking about the brand. This eventually inspired some 16-year-old kid in Reno to get in touch on Twitter. As well as being a helpful mindset that encourages brands and agencies to take risks, thinking small has other virtues. If you craft a message to appeal to lots of people, few will care. But if you create something that appeals to more specialized tastes and interests, they will be more inclined to spread it because they are passionate. Think of it like the ripple after a pebble is dropped into water."

In other words, going for the 'Hail Mary' play to hit the Twitter big time is likely not going to be as effective as focusing on smaller discussions, and looking to appeal to specific sections within your audience. That may mean more of your efforts also fail to gain huge momentum, but the cumulative wave, which takes some time to build, can have the same effect.

Twitter also highlights the value of tapping into emotion, and using broader cultural movements to help tie-in your brand messaging. For example, Twitter notes that "people will share something if they can use it to either express themselves or to communicate with someone else".

Twitter uses the example of REI's #OptOutside campaign, in which it announced that it would be closed on Black Friday in order to encourage people to explore the wilderness. By linking into anti-consumer sentiment, REI was actually able to fuel a larger movement, with more than 1.4 million people using the brand's hashtag. REI signed up a record number of new members to its co-operative as a result.

If there's a social movement that aligns with your brand mission, a strategic tie-in like this, almost in opposition to the broader trend, can help boost brand awareness.

Twitter also highlights various additional points - with examples - in relation to catering to audience needs, providing next-level brand experiences, and speaking to consumers in the language they use.

The latter note is actually a key point - again, as per Twitter:

"The brands that we spoke to with the strongest voice on Twitter agreed that letting corporate tones or jargon leak into the messaging is the fastest way to ruin a conversation."

On this front, Twitter uses another example from Wendy's:

"Back in 2017, when McDonald’s Tweeted, ‘All Quarter Pounder burgers at the majority of our restaurants will be cooked with fresh beef,’ Wendy's replied, ‘So you'll still use frozen beef in MOST of your burgers in ALL of your restaurants? Asking for a friend.’ The snappy reply was Retweeted more than 175,000 times and started a chain of discussion with more than 7,000 replies. [Wendy's] believes it was that last bit, the ‘asking for a friend’ that elevated the reply, by taking ‘inspiration from how people were actually talking’."

That's a valid note - without that last line, the response could be seen as more snarky, more critical. But by tapping into the common vernacular, and lightening the tone, it makes it a more playful jab, while also aligning with Twitter trends.

There are, of course, many examples of brands trying to use trending language and failing badly (see r/FellowKids), but again, by monitoring the discussion, and getting an understanding of how people are communicating on the platform, and what they're talking about, you can maximize your opportunities, in clever, relevant ways.

There's a heap more in Twitter's full report, which you can access here, and it's definitely worth reading, and considering for your 2020 tweet approach.