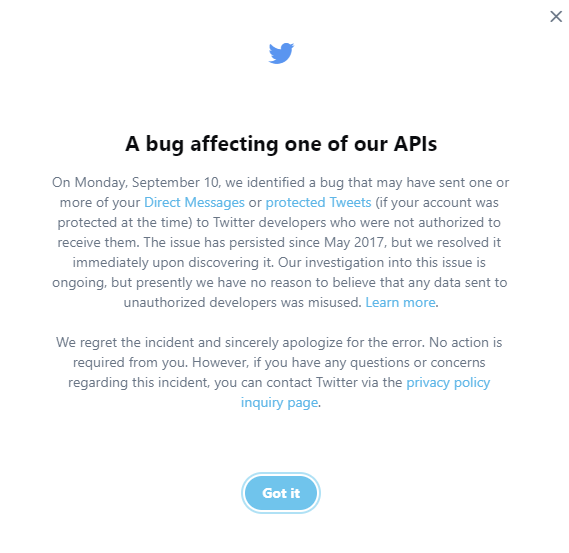 That's because your data, potentially, may have been affected by a Twitter API bug, which could have enabled third-party developers to access your Twitter data, including the details of your direct messages on the platform.

Twitter has explained that the potential issue did not cause widespread exposure - the flaw only involves interactions or Direct Messages users have had with companies who were using Twitter for things like customer service. DMs shared between individuals were not exposed in any way.

Twitter also notes that the potential issue could only have impacted less than 1% of all users - though worth noting that 1% of 335 million actives is still 3.35 million, so it could have exposed quite a few sensitive notes.

Also worthy of note here - remember when it was initially reported that the Cambridge Analytica issue only impacted 30 million Facebook accounts, then Facebook revised that up to 50 million, then 87 million when reporting to Congress? Twitter isn't Facebook, of course, but such numbers can increase as investigation evolves.

"We have no evidence to suggest that any data was improperly misused or exploited anywhere, and there's virtually no possibility that this happened, but we still want to be thorough."

In the post-Cambridge Analytica environment, social platforms are obviously increasingly sensitive to such breaches, and the potential backlash that could come if they fail to report them. So while Twitter says that there's no evidence of any misuse, they are working to be transparent, and assure users that the bug has been both detected and fixed.

So should you be concerned? If you had any DM interactions with brand handles on Twitter between May 2017 and Sept this year, it's probably worth paying attention to any further info, but at this stage, it appears relatively contained, based on the information provided.

The possible impacts will also be specific to each user, but as Twitter notes, they haven't found anything to suggest misuse as yet.