I mean, they’re still there, obviously, they’re still a part of the wider Twitter experience, but they never really took off how Twitter had hoped – that being a new way for users to discover the best of what the platform has to offer in an easy, user-friendly way.

Well even if you haven’t paid them much mind, Twitter says Moments are being used more than ever – and as such, they’re rolling out a new ad option for Moments, which will enable brands to sponsor Moments from premium content partners.

“Sponsored Moments include interstitial Tweets from the brand as well as a branded cover. Similar to other In-Stream Sponsorships, advertisers can promote the Moment to their specific target audience, expanding reach beyond the content partner’s existing followers.”

The first example is this Moment from Bloomberg, which is sponsored by Bank of America. You can see the Bank of America branding on the cover image (above the Bloomberg logo), then there’s a Bank of America tweet included within the Moment, amongst the other tweets (I’ve truncated the full Moment for this example).

It’s an interesting way to add another monetization option, enabling brands to attach themselves to content from prominent creators – though it’s not the only Moments ad option available.

Shortly after their initial launch, Twitter launched sponsored Moments, which enables brands to promote directly via the option. 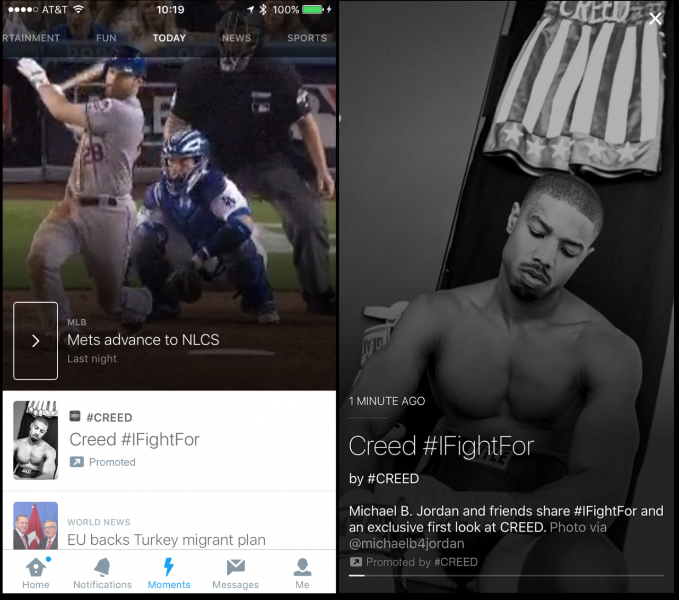 This new option is different, however, because the content itself is not an ad - it’s more akin to mid-post advertising on your blog, where the ad content’s integrated into the broader material.

In terms of how brands are partnered, Twitter explains that Sponsored Moments are an extension of their 'In-Stream Sponsorships' program, where brands and publishers are paired up on a 1:1 basis.

For publishers, the option gives them another way to monetize their tweet content, in alignment with their existing coverage.

“Sponsored Moments are just one more way publishers can monetize their content on Twitter, while making it easier for advertisers to reach audiences and sponsor premium content.”

But as noted, the relative value of the option depends on how much Moments are being used, and Twitter hasn’t provided any specific numbers on that front, outside of saying that they’re being viewed ‘more than ever’.

A recent post by Balaji Srinivasan of a16z estimates that Moments has an exposure to between 92m to 139.4M monthly mobile unique viewers, based on its prominence in the Explore section and Twitter’s user count (you can see Srinivasan’s full breakdown of his estimate here). That, according to Srinivasan, would give Moments more exposure than CNN, The New York Times or The Washington Post – nothing to sneeze at. Of course, there are a lot of variables within those calculations which could skew the actual exposure of each, individual Moment, but still, worth considering. Even if you take a more conservative view on the data, that’s still a lot of potential.

Given this, and with the new wave of publishers looking to alternate avenues to supplement a coming drop in Facebook reach, it’ll be interesting to see if the new option prompts more publishers to create more Moments in the hopes of luring ad dollars – and if that, in turn, better promotes Moments as a content option.

The timing's right for Twitter to push the option – now to see how audiences respond.

Sponsored Moments are rolling out to publishers globally from today