If you’re a US-based TikTok user, you may have been served this alert in the app over the past week. 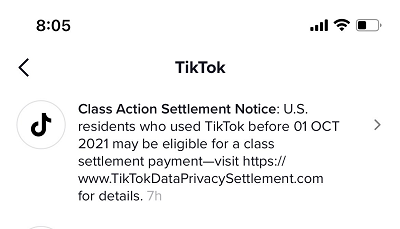 Which seems weird, even scam-like, right?

It’s not a scam, it’s actually linked to this legal filing in the Northern District of Illinois, through which, TikTok is facing a class action over the collection and usage of user data.

As per the initial settlement agreement (reported via Mashable):

“Plaintiffs allege that the TikTok app infiltrates its users’ devices and extracts a broad array of private data including biometric data and content that Defendants use to track and profile TikTok users for the purpose of, among other things, ad targeting and profit.”

TikTok has denied that it’s violated any state or federal laws in its processes, but instead of going to trial, it’s agreed to a settlement, which, if approved, will see all US TikTok and Musical.ly users, who signed up to the app prior to September 30, 2021, eligible for compensation, if they choose to take it up.

TikTok’s parent company ByteDance has also agreed to bring in third-party experts to oversee data privacy training for employees, and to avoid collecting biometrics and location data from users.

Given the complexities at play, ByteDance stands a good chance of actually winning the case if it does end up going to trial, which is why the plaintiff legal team has suggested that taking up a settlement may be the best way forward.

So how much will you get? Probably not a lot.

The settlement is currently proposed at $92 million, before attorneys’ fees and additional costs. TikTok had more than 100 million US users in August 2020, so if all of its users signed up to stake their claim to the cash, you’d be looking at significantly less than $1 per user as a payout.

But not everyone will sign up, so maybe you could get a couple of bucks out of it, if, indeed, the settlement is approved.

In order to take action, these are the options available: 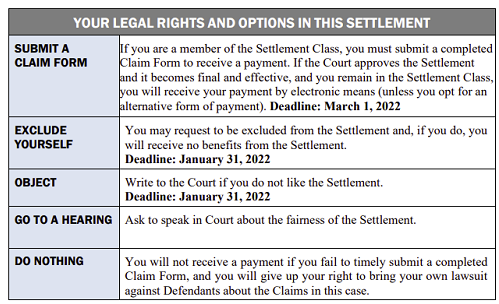 You can submit a claim on your own behalf or on behalf of your child/children, but if you take no action, or exclude yourself, you’re not eligible for any part of the settlement – again, if it is approved.

In terms of broader data usage, TikTok still faces various investigations and examinations on this front, particularly in relation to its links to the Chinese government, but it does seem as though this specific case will be settled, in order to avoid further legal challenge.

You can submit a claim form and find more information here.