Vine Returns as 'Byte' - but Is It Too Late for a Comeback?

Back in November 2017, around a year after the demise of Vine, Vine's co-founder Dom Hofman announced that he had begun work on a follow-up app, initially called V2. 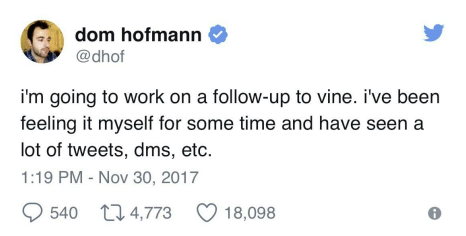 Upset at the demise of his original creation, Hofman wanted to take the lessons he'd learned in Vine's rise and fall and apply them to a new, better version, still focused on short-form video, but also on building a more viable business strategy to ensure it stuck around.

Last November, Hofman revealed that the new app had a name - Byte - and now, Hofman has shared a first look at Byte, while also opening up a closed beta program for selected users.

the byte beta we’ve been running with friends and family *feels* exactly like the vine friends and family beta, down to the weird but appealing randomness of the videos. that’ll change as we expand, but it’s a pretty good sign pic.twitter.com/rBbQrNtTJ7

Indeed, it does look exactly like Vine, which, at one stage, had more than 200 million active users. Will the new iteration fit into the same content niche or, with the arrival of TikTok, has Vine's time passed, leaving Byte in a hole that it'll never climb out of.

Definitely, that would have to be a concern - TikTok, which now has more than 500 million active users, has repeatedly been compared to Vine for its short video format, facilitating the same trends that Vine once did.

As reported by TechCrunch, Hofman is aware of the challenge Byte faces in this respect, though he doesn't believe that his app and TikTok are moving "in the same direction". Hofman's plan to grow Byte will be reliant on prominent creators, which he is aiming to "do right by", an area where his previous app fell short. By catering to top creators, and facilitating more revenue sharing opportunities, while also boosting exposure, Byte could gain momentum - though again, many of those users will already be active on TikTok. Winning audience will be difficult.

But there are still plenty of people who miss Vine, and there are plenty of modern day digital stars who started their careers there. If Hofman can cater to the next generation of the same, then he may be on a winner, and Byte could become another platform to consider.

It's another app to keep an eye on as testing evolves.