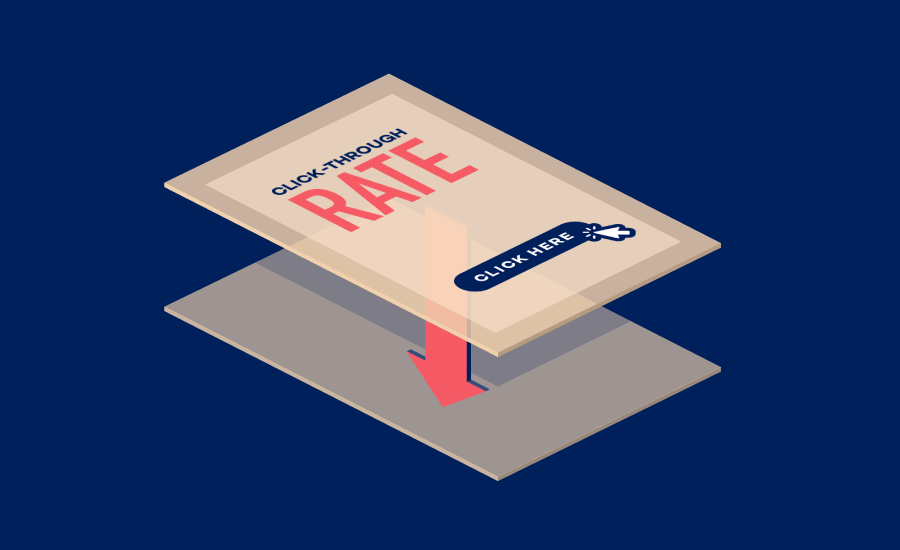 Sit in an office space, library or just become hyper aware of your own behavior on your personal computer at home and below the hum of chatter you'll hear the clicks. People click, click, clicking away as they browse the internet, play games or design graphics.

An average person makes about 428 clicks per day on average. Multiply that by the number of computer users on a daily basis and you get a very large figure. So how do you determine how many of these clicks your ad campaign is benefiting from?

To see how your campaigns are faring, you need to look deeper than just the number of total clicks your ads are getting - that's only skimming the surface of your results. A good indicator of how you're performing is calculating the click-through rate.

What is click-through rate?

This number represents the level of engagement your ads are receiving. It shows that people are responding to your ads, which is great news, however it's important that you consider this metric in its full context. You want to look at both the number of clicks your ads receive and the number of total views they're earning.

For example, gaining 1,000 clicks sounds impressive, until you throw in the fact that the ad had a million impressions. That 1,000 now looks relatively small, right?

As noted above, click-through rate is more than just looking at the number of clicks earned.

As with every other metric used to measure the success of your campaign, there are a few factors that affect click-through rate. Here's a brief summary of the main ones.

How to calculate click-through rate

The click-through rate formula is the number of total clicks divided by total impressions, expressed as a percentage. When looking to increase engagement, this percentage is what matters, because as mentioned earlier, it takes in the full context of all of the clicks through.

Once you've obtained this number, consider converted clicks as well. Compare them to your average click-through rate to trim any waste spend - which is people who click on your ad without converting, therefore costing you money without earning it back. This can happen when targeting is too broad or when you are using irrelevant ad copy. Be sure you're researching your keywords and running A/B tests to see which CTAs perform better to avoid these irrelevant clicks.

Finally, the question you've been waiting for. Although there's no exact number to determine what a good click-through rate is, 2% is average for an entire account across all verticals. This means some campaigns inside the account could be performing better and some could be performing worse. Anything higher than two percent is above average.

Based on YouTube's qualification of a view, Strike collected data on average click-through rates across various industries in 2016 (above). To highlight a few examples, adult beverage and toys had click-through rates of 1.82% and 1% respectively, while on the other hand, some industries didn't quite reach a full one percent. The health and beauty industry had 0.44%, B2B had 0.13% and gaming came in just under a full percentage at 0.9%.

And while those insights are YouTube-specific, additional research reports have indicated similar numbers - SalesForce's 2016 Q1 data found that the average click-through rate for a Facebook ad was just 0.98%, while on Twitter, anything above a 1%-2% CTR is considered quite good.

In addition to providing some level of baseline, the numbers show that in order to pinpoint what actually qualifies as a good click-through rate, you need to know your industry average and how your score compares to your competitors. Results may vary, so keep in mind the 2% account average, but don't mark your campaigns as a failure if they're not quite soaring that high.

Time to gather those clicks

Now that you've learned what goes into click-through rate and how to calculate it, you're ready to apply these findings to improve your ad campaigns. It's time to peel back the top layer of metrics and make improvements with a deeper understanding of what all those numbers mean.