YouTube is Moving into Podcasts, With New Details Revealing its Podcast Platform Plans

YouTube is steadily making moves into the world of podcasts, with a new leaked pitch deck providing more insight into the platform’s plans to more directly incorporate podcasts into the YouTube experience. 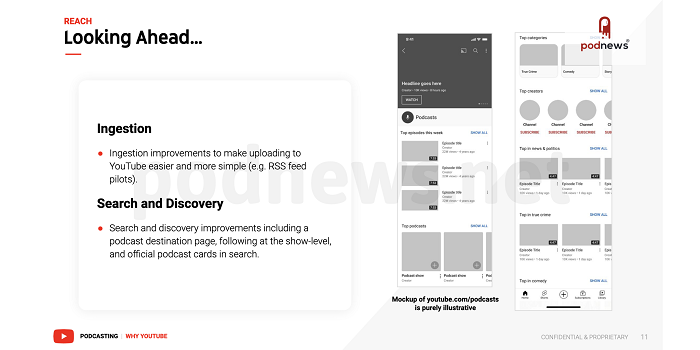 As you can see in this overview, shared by Pod News, YouTube’s currently in the process of developing a new podcast discovery home within the app.

Podcasters would be able to feed their audio shows in via RSS, with YouTube offering audio ads, analytics, and more to help them showcase their audio offerings.

In some ways, it seems strange for the world’s leading video platform to be leaning into audio, but in others, the move perfectly aligns with YouTube’s broader vision of creating a more comprehensive home base for creators, in order to help them maximize their audience reach.

Many popular YouTubers now have their own podcasts anyway, which they share to the platform via in-studio video clips, which essentially means that YouTube already hosts a lot of audio-focused content either way. At the same time, YouTube has also made music a bigger focus, with audio-only listening options providing another means to consume YouTube content.

In late 2020, YouTube reported that music streaming had reached an all-time high, while YouTube Music itself now has more than 77 million paying subscribers. So while visual elements remain central to the platform’s broader offering, there’s clearly significant interest in audio-only content as well, and YouTube also added audio only ads back in 2020, as part of its broader push to maximize YouTube Music.

Those ads, logically, would extend to podcasts as well, providing another way for YouTube to provide monetary support for creators, and building the platform as a more complete offering in this respect.

YouTube hasn’t provided any official release info for its podcast plans, but it did hire a podcast executive to lead its efforts last October, while more recently, it’s been offering deals to popular podcasters to film episodes of their shows.

It’s interesting to consider how YouTube is changing focus in this respect, and shifting its content funding away from original, studio quality programming, and into smaller-scale creators instead.

Back in 2015, YouTube launched a major push to take on Netflix and commercial TV, with ‘YouTube Red’, which saw it fund a range of professionally-produced shows as part of its monthly subscription package.

Work on YouTube Red included the development of series’ like ‘Cobra Kai’, as well as programming partnerships with big-name stars like Ellen DeGeneres, Kevin Hart, Demi Lovato and Katy Perry.

The view, as noted, was that YouTube was in prime position to move into premium content, and build its own stars into traditional TV and movie celebrities. But over time, YouTube has found that it doesn’t need to do that, with the most popular creators on YouTube creating more DIY, YouTube-style content, which has caused a shift in viewer behaviors that’s actually negated the value of traditional TV and movie offerings.

Which is why YouTube is now investing in creator platforms instead, giving users the means to build their own audiences, in a range of ways, to maximize their earnings potential in the app.

Which is working, and podcasts will add another element, providing more ways for creators to get maximum value from their efforts, all in one place.