YouTube’s launching its biggest assault on TikTok yet, as part of its broader push to dominate the short-form video trend, with the announcement that it will provide more direct monetization options for Shorts creators, which could make YouTube the platform of choice for more creative talent.

“Starting in early 2023, Shorts-focused creators can apply to the YouTube Partner Program by meeting a threshold of 1,000 subscribers and 10 million Shorts views over 90 days. These new partners will enjoy all the benefits our program offers, including the various ways to make money like ads on long-form and Fan Funding.”

Monetizing short-form video is hard, because you can’t add pre- and mid-roll ads into clips that are only 30 seconds long. That means that direct connection between individual video and ad performance is almost impossible – but YouTube has established a new process through which it thinks it can provide an equitable revenue share.

“In Shorts, ads run between videos in the Shorts Feed. So, every month, revenue from these ads will be added together and used to reward Shorts creators and help cover costs of music licensing. From the overall amount allocated to creators, they will keep 45% of the revenue, distributed based on their share of total Shorts views. The revenue share remains the same, no matter if they use music or not.”

So it’s not direct monetization, as such, but more a combined pool of revenue that will be split based on video view counts. Which effectively ends up being the same thing - though it does add an extra complication in the process, with YouTube left to intervene and control payout amounts.

That could lead to further concerns, which YouTube will need to work through as it goes.

The 45% revenue split is also different to the usual YPP rev share, which allocates 55% of overall ad revenue to creators.

So why this amount it lower for Shorts?

As explained by YouTube’s VP of Creator Products Amjad Hanif:

“Most folks who are in short-form today are earning through a fixed fund, and a fixed fund doesn't commit a specific percentage to the creator. In fact, it's up to the platform to determine each and every month how they're going to divide that up […] In short-form, we're gonna’ share with all creators who are part of the feed. As a part of that, that means spreading it out across all the creators, whether it was right before the ad, or three videos away from the ad. Shorts is also an area where we're investing a lot of product and engineering time into things like creation tools, as well as trust and safety. And so, part of that rev share is being aware of the investment we need to make.”

So, due to the added costs, in development and music licensing in particular, YouTube’s taking a bigger cut, though 45% is still significant, and is likely to become even more lucrative as more advertisers look to tap into Shorts, which are now being viewed by 75% of YouTube’s active user base.

As YouTube puts more emphasis on short-form content, more advertisers are going to be paying attention. And with YouTube also building its inventory of very short video ads, there’s clearly going to be a lot of ad dollars to go around, which could make YouTube the destination of choice for aspiring creative talent looking to make actual money from their clips.

Which they can’t do on TikTok. I mean, they can, but creators are already unhappy with the steadily declining payouts from TikTok’s Creator Fund, while its experimental ‘Pulse’ ad program, which enables creators with over 100k followers to monetize their clips, is fairly restrictive at this stage.

On YouTube, the additional Shorts funding will help to sweeten its overall revenue share pie, which has already paid out over $50 billion to creators over the last three years. Combine this funding with monetization potential of longer clips, and YouTube clearly offers the best overall package. And again, with view counts rising, this could well see YouTube overtake TikTok as the platform of choice, for many key, rising stars. 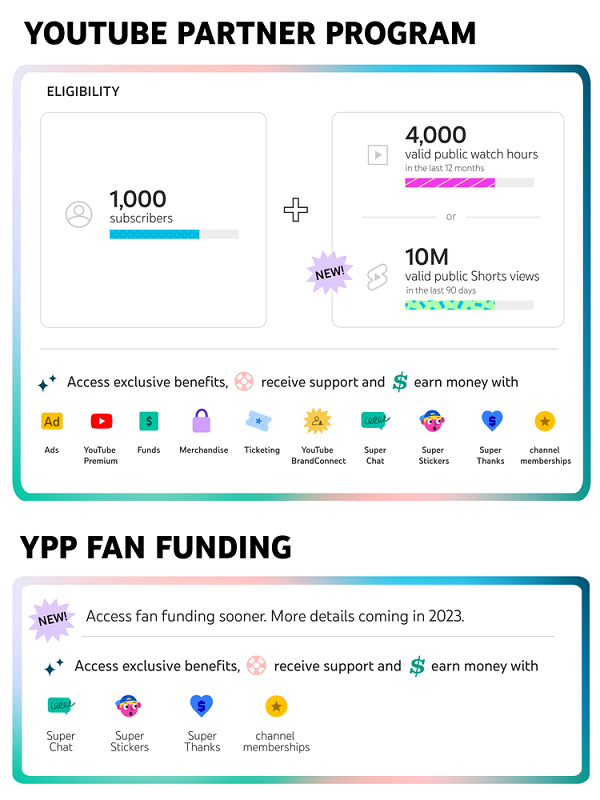 Of course, TikTok will take cues from this new program, as will Meta, and they’ll both look to launch similar monetization models to boost their own offerings as well. But at some stage, people will follow the money, and YouTube is now, and has been for some time, the place to be in this respect.

The most likely outcome, however, will be that creators look to enhance their earnings by posting on all platforms, with the broader spread of audience reach helping to boost their overall intake. That still seems like a problem that the platforms need to overcome if they truly want to win out - and if there is a move towards exclusive contracts, then that will complicate and segment the creator landscape even further.

But again, YouTube looks to be in the box seat, at least right now, in terms of creator appeal, with TikTok struggling to maximize its relationships with its talent, and Instagram itself reporting that it’s failing to meet creator needs.

In addition to Shorts-specific funding, YouTube’s also lowering its thresholds to qualify for monetization via YPP, which will give more people access to fan funding elements, including Super Thanks and Super Stickers (including Shorts creators), while it’s also developing new funding avenues for live-streamers as well.

In combination, the new announcements solidify YouTube’s monetization offering, and will quickly set a new benchmark for the broader industry on short-form video monetization.

But can other platforms do it as well as YouTube, and offer the same level of expanded funding – and what will that mean for creators looking to maximize their earnings?

It raises the stakes, across the board, and it’ll be interesting to see how the other platforms now respond.