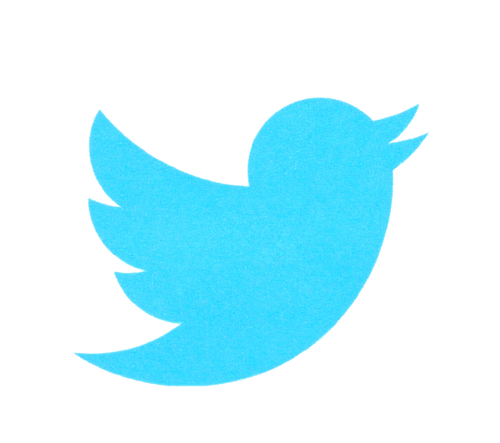 You've got 140 characters per tweet - if you want to make the most of your messages you need to make every one count. In your everyday tweets, message efficiency is crucial, but this is amplified even further when you're creating Promoted Tweets. If you're paying to generate the best reach and response possible, you need to make sure that every word, every letter - every emoji - is positioned just right, in order to generate the biggest impact. And those details definitely do count - one single grammatical change could make a huge difference to your overall campaign effectiveness.

Don't believe me? Well, as they say, "the stats don't lie". This week, Twitter's released their findings from a new study which examined more than 9,000 website clicks and conversions campaigns on the platform to work out which type of wording is most effective for advertisers. And their findings show exactly that - a single word, a small, seemingly insignificant, change - can have a major influence on the end results. And what's more, these findings don't necessarily only relate to paid tweet content. The data, in large part, can be applied to your everyday tweets as well.

1. "Emphasize the need for urgency"

It's a common copywriting tactic to use words and phrases that inspire a level of urgency or time limit - terms like "hurry," "fast," "now," "quick," "running out," and "limited time". The psychological effect is that readers feel more compelled to make a decision, to strike while they can in order to avoid missing out. That emphasis also applies to tweet copy - Twitter's research team found that Promoted Tweets using these terms saw a 10% lower cost-per-acquisition (CPA) and a 10% higher link click rate (LCR). 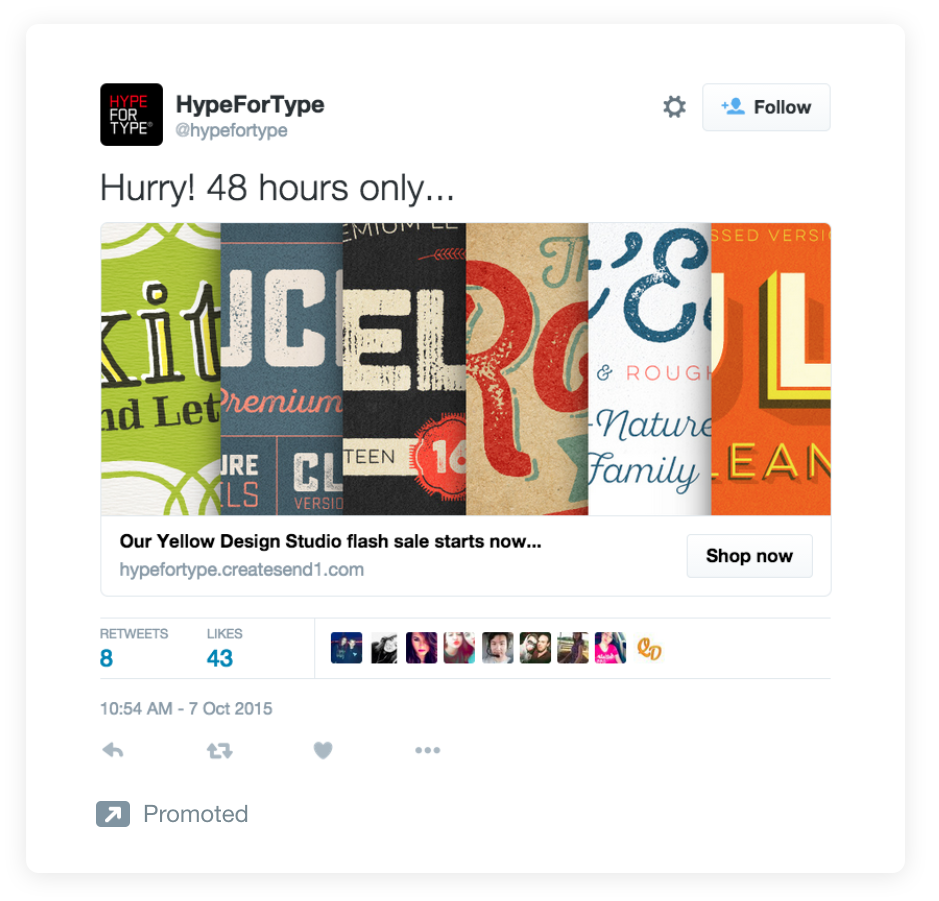 It may seem like a simplistic tactic, but it works, and while you can't use it in every tweet you send (people will work out that not everything you tweet is urgent), it can be a highly effective device for your messaging, when used well.

It really is the little things. Twitter's research team found that tweets that advertise percentage discounts rather than price-based discounts see a 40% lower CPA. 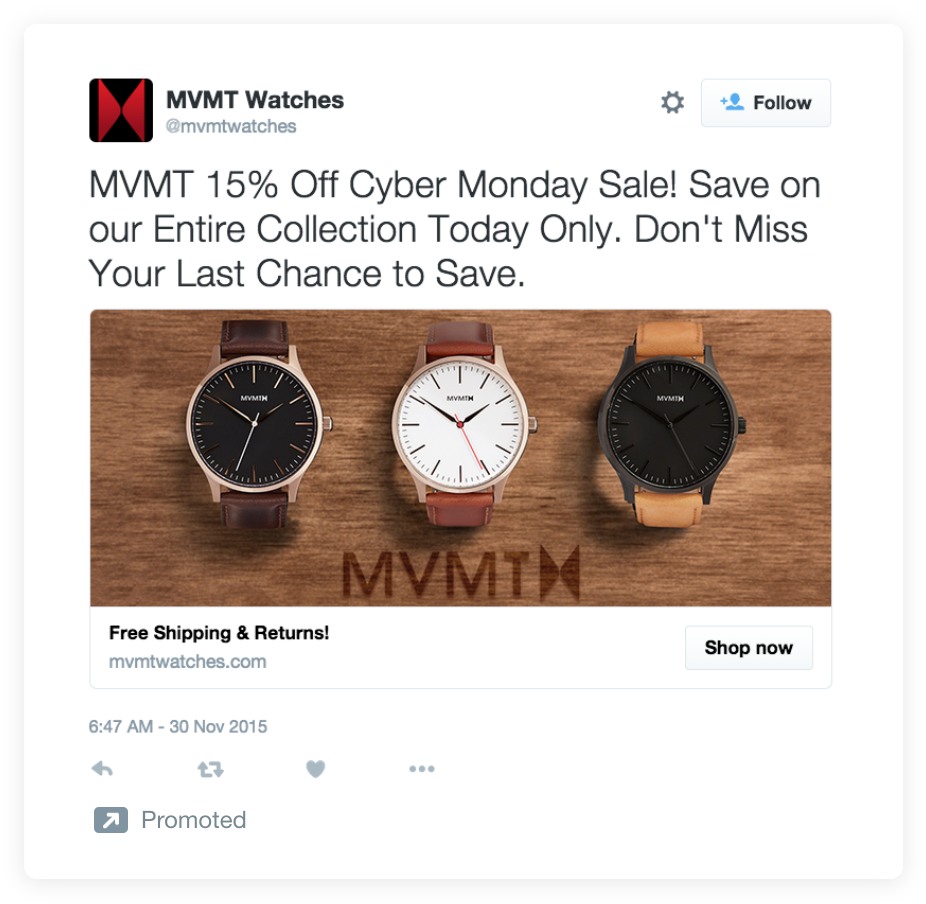 Pretty amazing, huh? 40% is a significant reduction - and again, this is based on over 9,000 campaigns, this is not a small sample size, the detail here is based on a large breadth of examples. While such details may seem like nothing, when you're working with only 140 characters, everything is important.

This is another detail-oriented note - Twitter's research team found that tweets that mention the word "new" in regards to products or services see a 10% lower CPA and a 26% lower cost-per-link-click (CPLC). 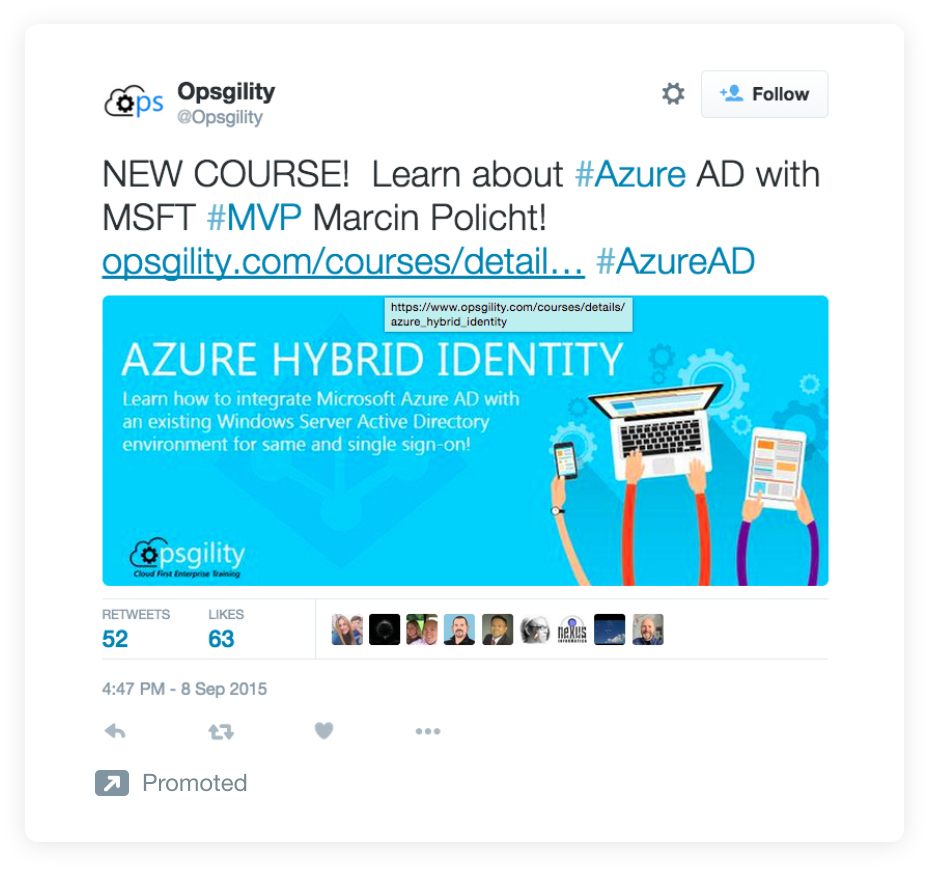 Now, as with urgency, you can't just put 'new' into everyone of your tweets, people will soon work out that what you're offering is not necessarily 'new' (which could lead to a significant decline in tweet response), but if you are promoting something which actually is new, it's probably worth noting that detail.

Here's an interesting one, and one which is likely specific to paid tweets - Promoted Tweets with hashtags see a 24% higher CPA and a 3% lower link click rate. That's right, hashtags are no good for promoted tweets, according to Twitter's research. Twitter's advice: "Keep the audience focused on your call to action and don't include a hashtag in your Tweet copy." 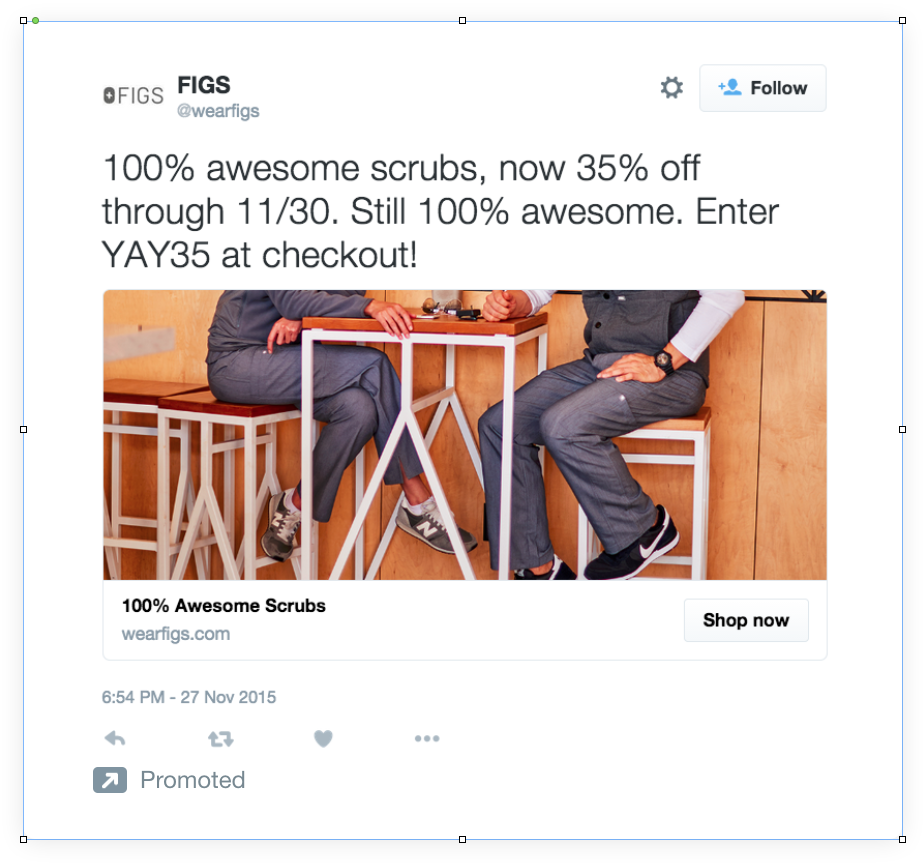 There's been various studies done on the effectiveness of hashtags, and definitely, including more than two hashtags in a tweet has been shown to reduce effectiveness and reach. But in the case of promoted tweets, it looks like none is best. It's possible that including a hashtag in a promoted tweet may seem a bit spammy, like you're trying to tap into a conversation stream with your ads, maybe it's not what users are looking for when they're conducting hashtag-based searches. Regardless, the data shows hashtags are no good in paid tweet content. Worth noting.

You've only got 140 characters - and even then, Twitter's data suggests you should work to keep your tweets well within that range. Their researchers found that Promoted Tweets with 40-60 characters of copy result in a much lower CPA than longer Tweets. 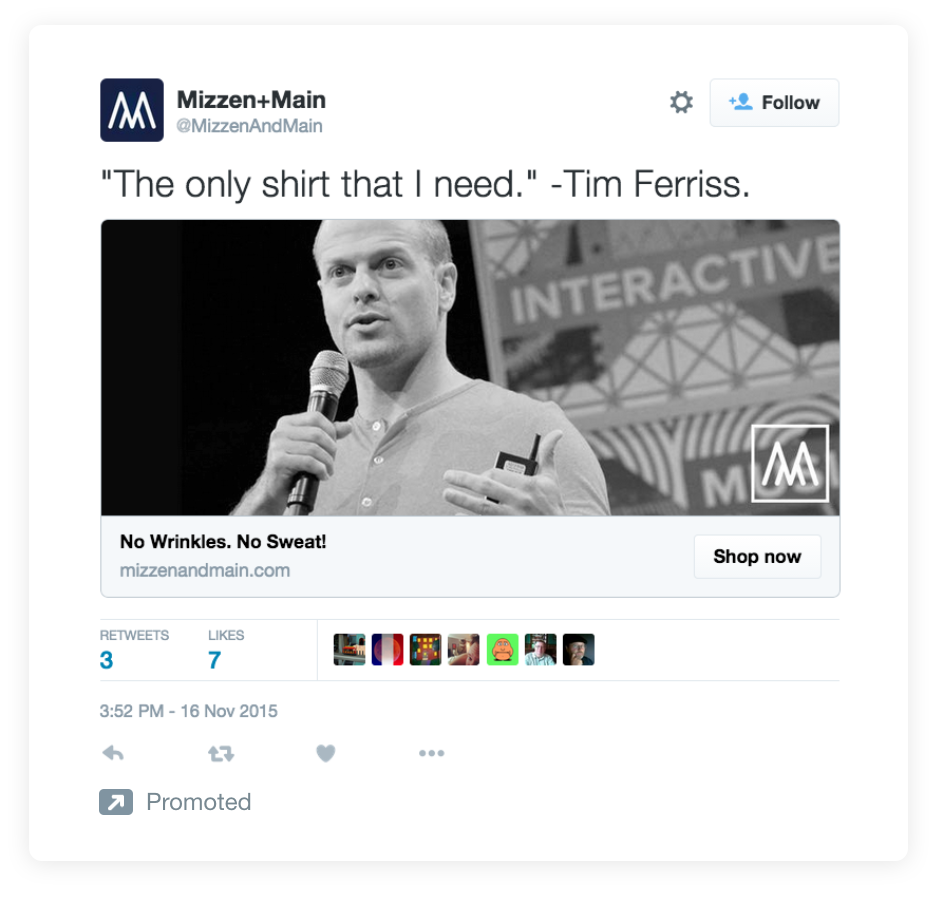 That seems like a very tight restriction - but again, the stats don't lie. A common Twitter best practice has long been to keep your tweets short in order to give people room to re-tweet with their own comments, though this has been negated more recently with the improved 'quote tweet' capability, enabling users to include the full text of the original along with your own comments.

Nevertheless, keeping it short and simple, wherever you can, appears to be the best way to go to improve the effectiveness of your promoted messages.

6. "Offer the audience the chance to win"

No real surprise here: "Tweets that advertise a prize or competition with words like "win," "contest," or "sweepstakes" have a 40% lower CPA and a 1% lower CPLC." 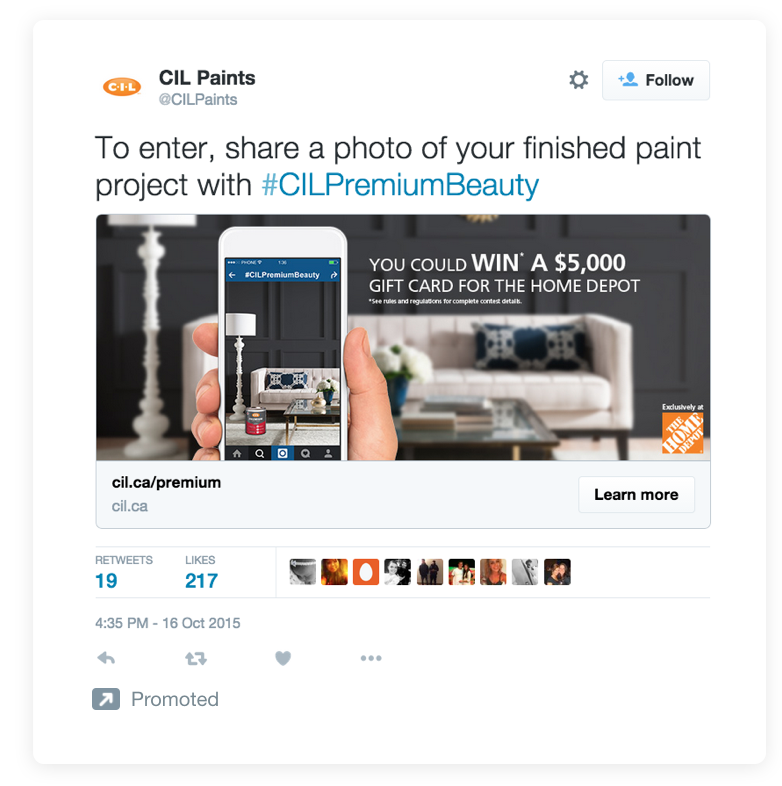 Competitions are a much-used and effective tactic for spreading your message on social - if you offer to give people something for free by undertaking a quick and easy action, why wouldn't they give it a shot? Competitions also play into the wider ethos of what social is all about, in giving everyone a voice and a way to participate in the wider world. Entering a competition is a direct and easy way to do just that - you submit your entry and you (ideally) get something in return. A 40% lower CPA is definitely something worth noting - running a competition is a great way to boost reach and exposure on virtually all social platforms, and Twitter is no exception.

7. "Spark interest by asking a question"

This is another way to tap into the power of social and the core idea of social media in providing everyone with a voice and a way to be heard. As such, asking questions is a great way to utilize social channels - for one, you can get valuable answers and responses which can help guide your strategy. But of equal importance, you encourage interaction by calling for response and involving your followers in the conversation. 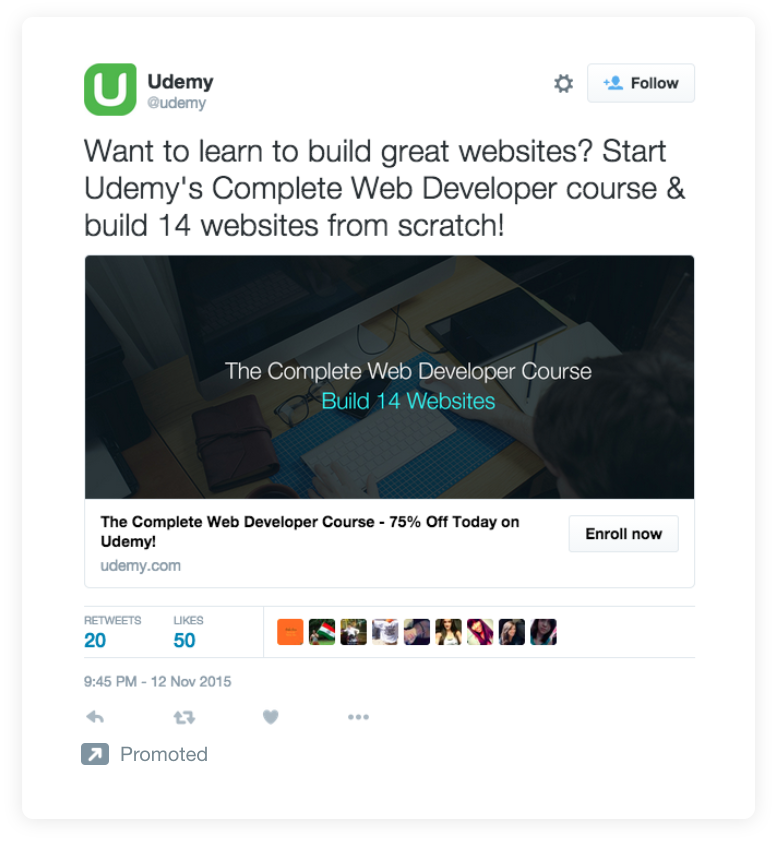 Twitter's research team found that tweets that ask a question have a 9% lower CPLC and a 16% higher LCR, underlining the power of interaction and of empowering your social media audience by prompting them, directly or indirectly, and seeking their input. And even if you're not directly seeking their thoughts as such (as per the example above), there's still a strong psychological pull in asking a question, an implied engagement that can boost message effectiveness.

There are some great lessons to be learned in this new Twitter guide, some simple yet important notes, borne from a wide research pool, which takes them from theoretical ideas to verified principles. And while you can't use all of these notes all of the time - you can't just go construct competition tweets with percentages and urgency and "new" noted somewhere in between - it is worth considering each element and how it relates to your campaigns and promotions.

And even if you're not using Promoted Tweets, many of these same principles apply more widely and should be considered in your everyday tweet construction, particularly in regards to asking questions and considering ways to engage and activate your audiences.