First up, Snapchat's offering new promotional World Lenses, their next level Lens tool they launched back in November, and updated recently with new 3D overlay tools. Just as Lenses enable you to put a digital mask on your face, World Lenses do the same for the world around you, which seems perfectly suited to AR-enabled glasses, the next level of AR development.

The new promotional World Lenses will give users the opportunity to superimpose themed graphics and logos on their real world scene - Warner Bros. will be the first company to utilize this new functionality as part of a promotion for their new film 'Everything, Everything'.

And while this first example utilizes 2D graphics, brands will also have the opportunity to utilize 3D elements - in another example, Netflix is running a Sponsored World Lens promotion for their upcoming program 'Glow'.

Lenses have proven to be a popular element of the Snapchat experience. As part of their IPO documentation, Snap Inc. noted that a third of their daily active users (55.3m) "play with Lenses everyday". Lenses are also one of the elements Facebook has targeted, with their own variation of digital video masks, and the introduction of their new Camera Effects Platform which will enable third party groups and users to create similar, unique effects. Facebook hasn't yet, however, moved to introduce ad and branding options of this type within their AR tools, but given the history, now that Snapchat has, Facebook probably will too.

Up till now, brands have only been able to purchase Sponsored Lenses nationally, but Snap's adding the capability to target Lens campaigns by age, gender and the types of content people look at and engage with. This enhanced targeting will not only ensure better response rates, but may also mean lower costs - right now, a national Lens campaign can cost upwards of $700k, putting it out of the reach of most brands, and limiting Snap's opportunities.

At present, this type of targeting is only available for US-based audiences.

For Geofilters, Snap's introducing a new option called 'Smart Geofilters' which incorporate geographic details into the filter itself. As explained by Marketing Land:

"For example, an airline marketer can feature a Sponsored Geofilter at every airport in the country and have that filter incorporate each airport's name rather than a generic message. In addition to airport names, advertisers can customize their Sponsored Geofilters based on a high school's or college's name; the name of a state, city or neighborhood; or by ZIP code."

Mashable reported a version of this 'in the wild' recently, with business names incorporated into the Geofilter. 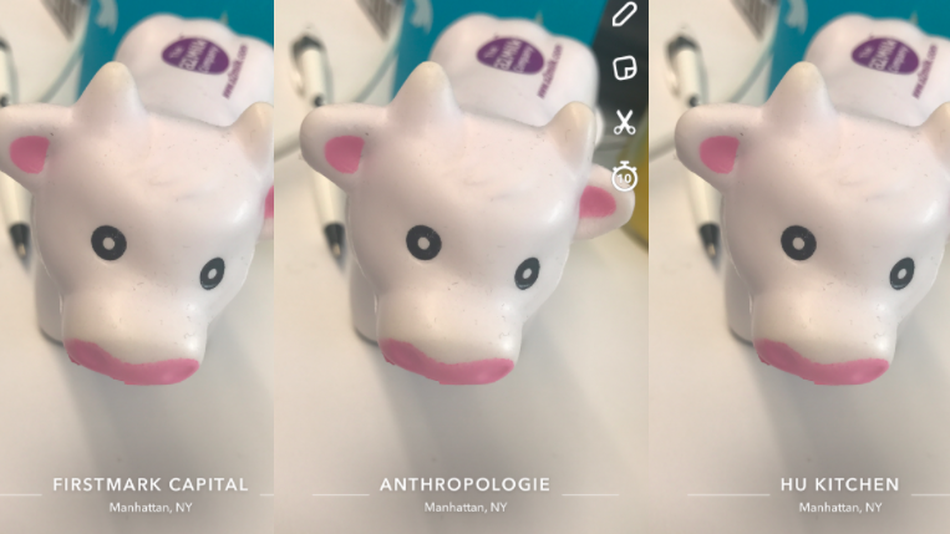 That's a fairly basic example, but the option adds a new capability and consideration which could help boost engagement with sponsored Geofilters.

The updates come as the pressure quickly mounts on Snap Inc. following their recent IPO.

Last week, Snap Inc. held its first ever earnings call, providing the market with an overview of how the company is faring and what they have coming up. And it didn't go so well.

While analysts had expected a less than stellar report card, particularly in the face of mounting competition from Facebook, Snap Inc.'s position was actually worse that than anticipated, posting a $2.2 billion loss for the quarter, attributed, in large part, to compensation tied to the company's listing. But even more, Snap Inc. CEO Evan Spiegel didn't provide much assurance moving forward, noting that they have no plans to try and reach older users and blaming slower growth on their refusal to adopt 'growth hacking' type strategies.

So how does Snap Inc. respond in the face of increased market pressure and questions over their future strategy? Does the app have a plan to counteract the growing competition from Facebook?

Thus far, Spiegel and Co are keeping it on the down low. Or they've got nothing. Time will reveal which is correct.