Have you ever used Snapchat's face-altering Lenses? Lenses are graphic overlays that can transform you into a lizard, a flaming skull, an animal - there's a whole array of funny and horrifying additions which you can transpose onto your selfie pictures or videos. 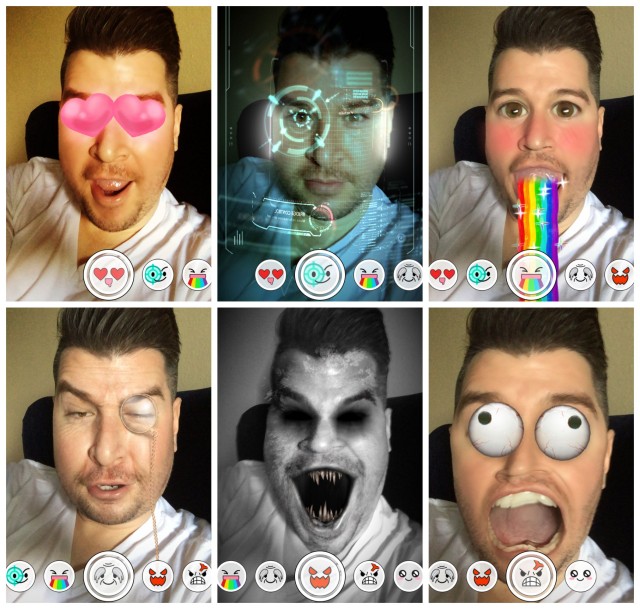 Lenses have proven to be one of Snapchat's most popular features - the company says that Lenses are used in over 10 million Snaps per day. Lenses proved so popular, in fact, that Snapchat moved to monetize them back in November by opening up a Lens store where users could buy their favorite Lenses before they expired (Lenses are provided on a rotational basis - there are seven available at any given time, but each day the oldest is replaced by a new one). But despite generating good sales via the store, Snapchat opted to shut it down only two months later, saying it was shifting focus to its advertising business instead.

But make no mistake, 10 million Lens uses per day is big - that's a huge amount of engagement being generated because of one single feature. If you compound that use by likely responses to those snaps (you could safely assume that each Lens use is generating an average of 10 or so responses), the interaction being built on top of the Lens product is massive.

And of course, as with all trends and shifts within the social media landscape, Facebook has been watching on with keen interest.

As it turns out in this case, The Social Network has been watching with a lot of interest indeed - today, Facebook has announced that they've acquired image altering video app Masquerade (or MSQRD as it's more commonly known) for an undisclosed sum.

The functionality of MSQRD is very similar to Snapchat's Lenses, which are powered by Looksery, a company which Snapchat similarly acquired back in September. The difference here is that MSQRD is more focused on video - while you can, of course, create Lenses videos within Snapchat, the length limitations of the app only enable you to create short clips. MSQRD is more interested in enhancing longer form video content with their enhancements and additions.

And while the first conclusion people will jump to will be the addition of face-changing graphics within Facebook's video tools (which will no doubt be a part of the deal), it's interesting to also consider the wider applications of Masquerade's technology within the Facebook eco-system.

"Real-time video communication is quickly growing in popularity. Our company strives to make live video interaction even more attractive for both business customers and consumers by offering advanced software solutions capable of altering and/or enhancing person's appearance in live video. Our advanced software solutions can be incorporated into videoconferencing platforms, customer service centers utilizing live video for customer interaction, as well as any other systems and services, which rely on live video feed."

The mention of business use is what's most interesting here - while the focus will be on quirky, fun tools, (ala Snapchat), Masquerade's technology could actually be used for more purposes than it may seem. What if, through this technology, Facebook was able to provide new options to help users enhance their video content, new tools that could generate artificial backgrounds and details to improve the appearance of Facebook video posts? What if they could build Instagram-style video filters that could be applied to content to make it look more professional, seem more polished?

The specific mention of live video in this statement also stands out - as we know, Facebook's putting a big emphasis on Live video. As noted by Zuckerberg himself:

"Live is going to be an awesome thing for public figures. ... Imagine your favorite public figure or politician having the power to broadcast from their pocket, go live, have an audience of thousands of people. There's a lot more that needs to be done to give people the ability to connect with the people and figures they're interested in. I think you're going to see a lot of that on Instagram and Facebook."

Could Masquerade's technology be the addition they need to boost Facebook Live and make it the go-to live-streaming platform?

Either way you look at it, the addition of MSQRD into the Facebook family's an interesting addition, and will no doubt lead to a new range of updates and enhancements within Facebook that'll bring new attention and interest in the platform's video offerings. Will it be enough to get users to come back to Facebook from Snapchat? Probably not, Snapchat's cemented itself into the lives and interactive habits of a whole new generation of users - winning them back will likely take more than a few new features and additions.

But then again, there may be more to Facebook's latest acquisition than it, initially, seems.

Taking a break from coding to welcome the MSQRD team to Facebook!