There's always something new in the social media space. Even as we come into Thanksgiving weekend, the platforms continue to release updates and changes - mostly small, but then again, Instagram did release their new live-streaming functionality just this week.

But even with those smaller updates, some of them can prove hugely important - what's minor to one person or business may be major to someone else. As part of our ongoing effort to provide you with the best coverage of the latest social media news and insights, we feel it's important to cover all of these updates and tests and their potential implications - but sometimes they're not worthy of a their own individual post.

So to keep you up to date on these smaller changes and features, here's a rundown of five smaller updates and notes in social - starting with Facebook, which is looking to improve its search functionality.

In my recent social predictions post looking at what's coming 2017, I noted that I expect Facebook to be working on advanced search tools to help facilitate and grow the more than two billion searches already being conducted on the platform every day. That number always seems a little surprising - two billion is a lot of search activity. If Facebook can work to better facilitate that and become a more all-encompassing search option, they'll be able to take market share from Google and further strengthen their position as the leading platform online (while also providing another potential source of ad revenue).

And while they haven't announced any major updates as yet, Facebook has this week outlined how they're working to improve search by simplifying the process and making it more universally relevant.

In a post on Medium, Facebook Product Designer Justin Stahl has explained how they've been improving search by studying user behavior, particularly among users outside the US. What they found was the current search layout was somewhat confusing, with the combination of auto-complete matches and images for Pages leaving some unsure on whether the search results shown represented all matches - or even what the actual results Page itself displayed. 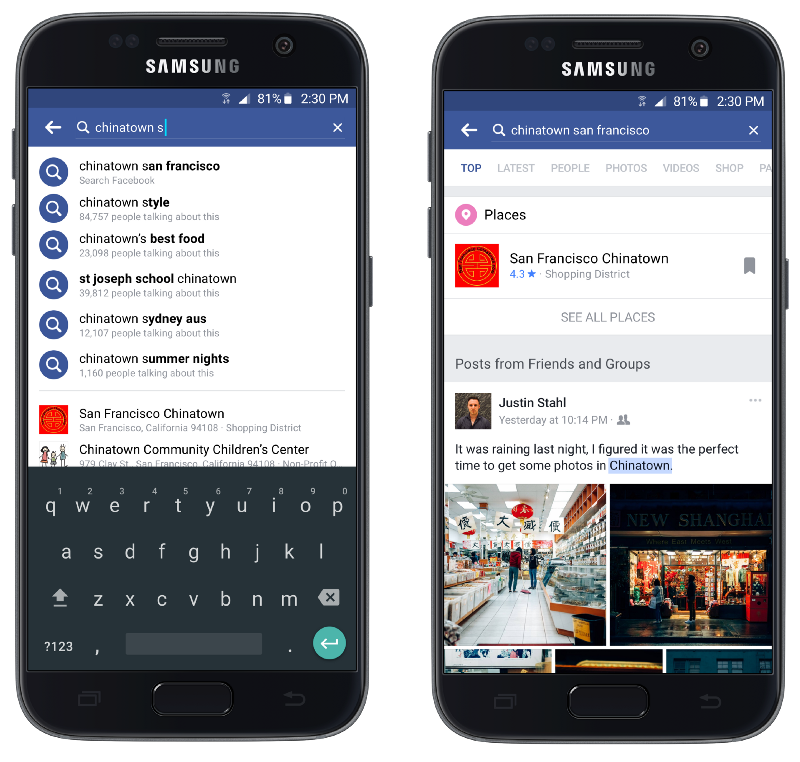 As explained by Stahl:

"With photos, icons, and snippets of information in the auto-complete, people thought the navigation results were the only ones available. They rarely made it to the fuller results page, and if they did, they often confused it for a profile or Facebook Page. When they couldn't find what they were looking for, they felt lost or assumed it didn't exist."

To improve this, Facebook's developed a new, simplified search interface, which now lists the search results in plain text and prompts the user to click through for more detail, as opposed to including as much information as possible on the search page. 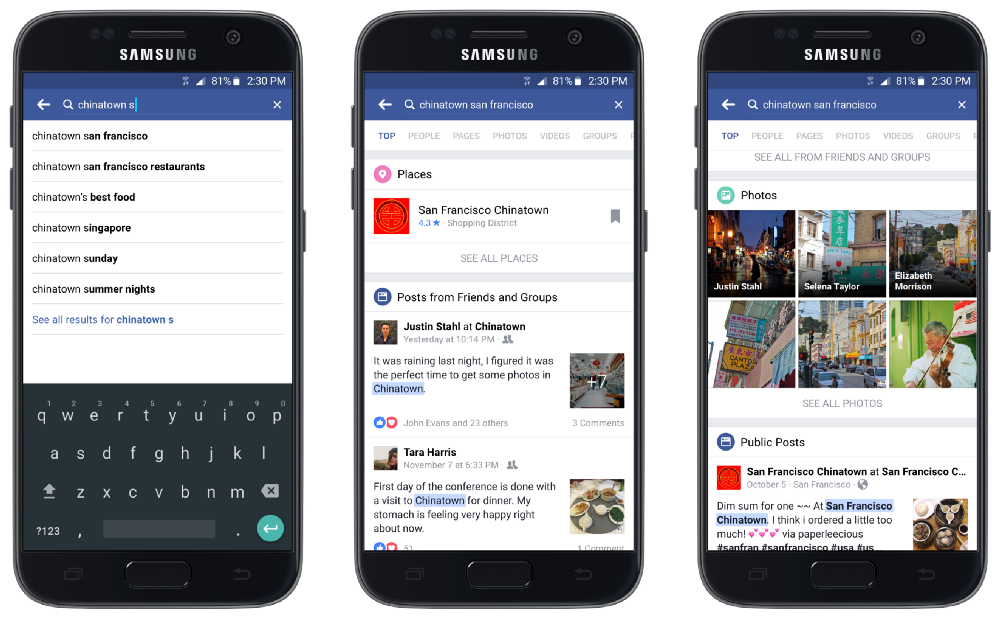 Their testing has shown that the new search model helps more people understand how Facebook search works, which will lead to more people using search for queries in future.

Interestingly, the new layout works more like Google, with auto-suggestions on the main search tab, then full results upon clicking through. And as noted, given where Facebook could be headed with search, that similarity makes sense.

Facebook's made significant advances on image recognition this year, and has sought to boost on-platform discovery with new marketplace listings and recommendation tools. It makes sense for advanced search to come next, and for Facebook to look to facilitate these growing user behaviors and make it easier to find relevant content from within the social network.

Simplifying their search process is likely just the first step.

Facebook's also testing out a new feature which will help users find wi-fi hotspots in their area to help keep them connected. 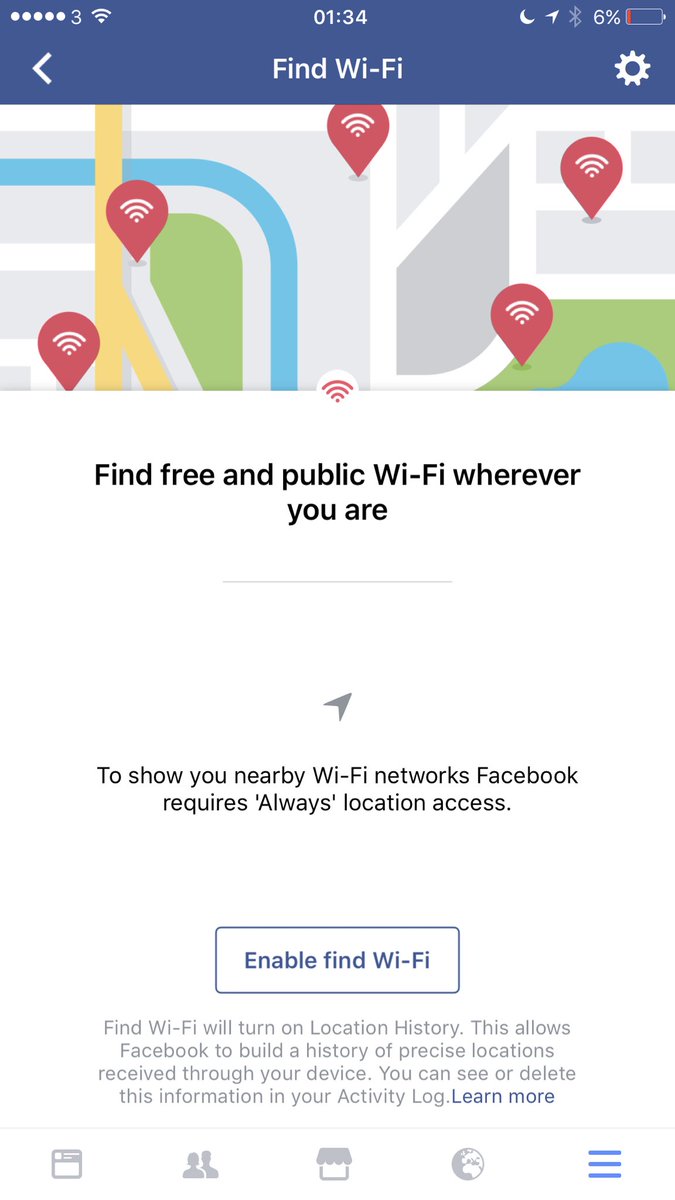 As noted by The Next Web, the move is likely motivated, at least in part, by Facebook's push to get more people broadcasting via Facebook Live - it's difficult to stream content without a steady internet connection.

"The more nearby locations Facebook can point you to, the better the quality of real-time information sharing, news, and viral-esque video content becomes. It's everything Facebook wants from its Live feature."

The new tool is listed in the 'Options' menu (the three horizontal bars) in the mobile app - it's only available to selected users at this stage so you may not see it. For those that do have access, the new option is listed as 'Find Wi-Fi' and it brings up a map with nearby hotspots highlighted with red drop pins. 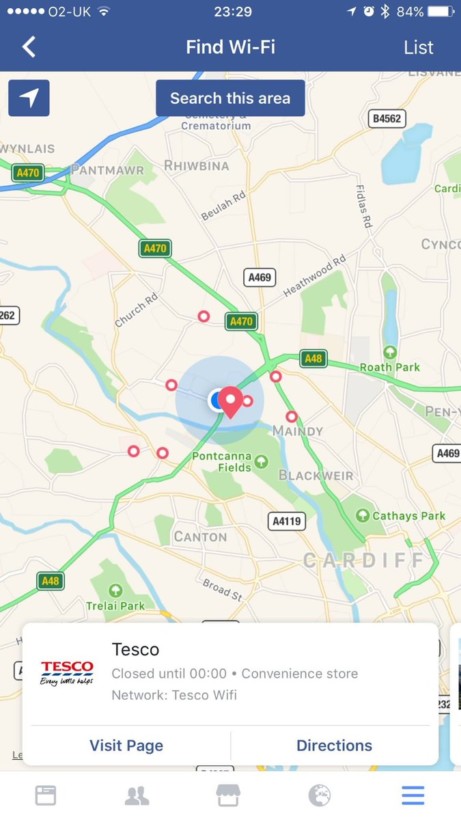 It's another way to keep more people connected more of the time - and as noted, it's no doubt aimed at getting more people to stream more often.

Did you know that there are now more than 34,000 live Messenger Bots available within Facebook Messenger?

The fact that people are surprised by this number highlights one of the biggest challenges restricting the bot revolution - while a great number of developers and businesses are jumping on board, users, it seems, haven't warmed to bots in the same way, with the current perception of Messenger as a simple, connective tool for friends and relatives potentially limiting the wider bot push.

But Facebook's working to change this by more actively promoting bots and their practical value - like, for example, these bots that can help you plan your Thanksgiving dinner.

Still trying to figure out what to make for Friendsgiving brunch or Thanksgiving dinner? Get recipe ideas from these bots on Messenger. pic.twitter.com/4XyhTe2DPh

This is a simple, valuable way that bots can provide assistance, using trusted brand names to provide basic advice around related trends. But then again, you could probably find out the same information via Google, there's no huge value-add in bots there. But then there's the case of Sephora's new bot, to which you can send any picture (like the flower in the below example) and it'll return you a list of matching lipstick shades.

Pretty cool, right? This is how the bot takeover will happen - not all at once, but incrementally, through small, value-adding tools like this that provide additional functionality to what's available via common search platforms or tools. And once people start using bots and finding value, they'll use more of them, and the momentum will build over time.

Definitely don't be dismissing the potential of Messenger Bots just yet.

Last July, Google introduced a new listing of the highest foot-traffic times for any given business, displayed within the relevant search results.

The information's based on aggregated data from smartphones with location services switched on and provides a comparative baseline of potential traffic - so if you wanted to organize a meeting at a café in a nearby city, you could check the peak busy times and know if you needed to book ahead (or avoid it entirely).

And now, Google's taking this functionality to the next level. Rather than just showing you the common busy times based on historical data, Google can now also display how busy a business is right now, with real-time updates on foot-traffic.

As you can see in the example, Google's also adding notifications on the average amount of time people spend at each location.

It's an interesting update, and will no doubt prove helpful to a great many users - but it's also a little creepy to think that Google is tracking your every step.

How are they doing it? Ever use Google Maps? What about Pokemon GO? There are any number of apps and tools that use Google Maps as the base in order to help provide you with location information, and most people now use these in one form or another, enabling Google to track such trends.

And the last social update of interest heading into the holiday weekend is the latest data from Houseparty, the multi-participant live-streaming app from the makers of Meerkat.

It seems like the app may have tapped into a new live-streaming trend - as reported by TechCrunch, Houseparty now has 1.2 million daily users. 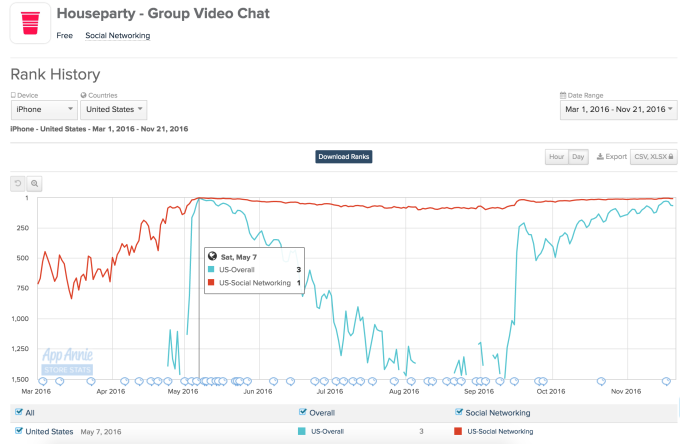 The adoption of Houseparty certainly seems to have piqued Facebook's interest - in introducing the new live-streaming functionality for Instagram earlier this week, Instagram Live product manager Shilp Sarkar noted that:

Now that's not necessarily Houseparty-specific, that's just a general use-case note, but it does seem that there's a new trend emerging among younger users, getting together via stream and catching up at all hours.

The difficult part for Houseparty will be keeping their system going - operating a live-streaming platform is expensive, so they'll need to monetize sooner rather than later. But it certainly raises an interesting consideration in the landscape, and a new option for Facebook and Twitter to consider - along with the potential implications of a more live-stream comfortable user base which is growing up on the practice.