Instagram has long been known as the place to share your best images, to present a vision of yourself and your life as you'd like it to be known. This has lead to users taking multiple versions of the same image in order to capture the best one, and lead to many younger users, in particular, running secondary accounts where they can post more goofy, relaxed images away from their polished main feeds. Or, alternatively, they can just publish to Snapchat where that content disappears.

But Instagram doesn't want to be seen that way - as Instagram's Head of Product Kevin Weil recently told Recode:

"We want Instagram to be a place where you share all of your moments, [including] the more private moments or the inside jokes that are relevant not for your entire Instagram following but for a smaller group of folks."

This is the impetus behind Instagram's latest big announcement - rolling out over the next few months, Instagram is bringing live-streaming to Stories and disappearing photos and videos to Instagram direct messaging.

And their approach to each element provides some interesting and compelling use-cases.

As shown in the video, going live via Instagram is easy - you swipe right from your home feed, select 'Live' from the bottom bar then tap the large 'Start Live Video' prompt. When you do, a selected group of your friends who've shown interest in Live video (or who have notifications switched on for your profile) will be notified that you're broadcasting live, but not all of your connections. This is important - as noted, Instagram's looking to boost that personal element, to facilitate sharing of more intimate content, so they don't want to flood everyone with notifications, the focus isn't on getting in as many viewers as possible.

This is a change in approach from Facebook Live, which started as a celebrities only option. With live-streaming on Facebook, the focus is largely on broadcasting and reaching a wide audience. But Instagram's going the other way - noticing how younger users use live-streaming, Instagram's working to provide more intimacy.

As noted by Instagram Live product manager Shilp Sarkar (to The Verge):

And that then leads to the second major proviso of Instagram Live - live content on Instagram only exists while it's happening. As soon as the broadcast is over, it's gone. No replays. No recorded videos posted to your profile.

In some ways this seems counterintuitive - when Meerkat was first launched you couldn't save your broadcasts, an element that many users found problematic. Periscope improved this, keeping your videos around for 24 hours (it now saves them permanently), then Facebook Live took it a step further, adding all live broadcasts to your profile. But while the ability to save your broadcasts improved the viability of the option for broadcasters, it also took away the freedom of being able to create anything, anytime, and not have it kept for posterity or reference. Instagram's hoping that by making everything non-permanent, more people will feel comfortable about going live, and will do so more often as a result.

When you're broadcasting, your friends will be able to see that you're live via your Stories icon in the app - a 'Live' badge will be attached to your picture, as shown in the first image below. 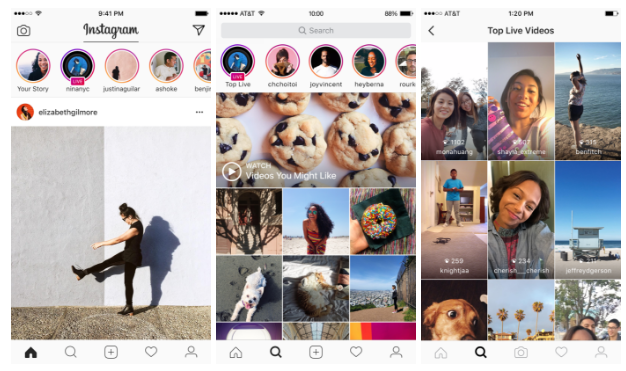 Interestingly, Instagram's also adding a 'Top Live Videos' section within the Explore tab to highlight live content happening at any given time. The listing will be displayed based on view count, relative geography and language for each user, aiming to showcase the most engaging examples - and since they disappear after broadcast, you'll need to check them out as they happen. And while the logic of this listing makes sense - it'll give celebrities, in particular, another way to reach a wider audience - it does somewhat go against the more personal ethos of the addition, as the listing will also include people you don't follow.

It's an interesting approach to live-streaming, taking a different angle to Facebook Live and Periscope. Originally, when Kevin Systrom flagged that Instagram was looking at the possibility of live-streaming within the app, I couldn't see a way it would fit. But that's because it doesn't - it's a different approach to the normal, curated Instagram focus. The addition is squarely aimed at younger users, taking on both Snapchat and even newer live-streaming start-up Houseparty (from the creators of Meerkat) as a place for teens to interact. And given most of them are active on Instagram anyway, with established friend networks and connections, it makes sense that more of them will look to utilize these new live-streaming tools.

In addition to live-streaming, Instagram is also adding another, direct connection-focused, element, with the ability to send disappearing messages within the app.

"Since launching improvements to Instagram Direct last year, the number of people using Direct each month has grown from 80 million to 300 million people around the world. In fact, many of them use group threads every day to stay in touch with their closest friends and family."

Given the rising interest in messaging on the platform, Instagram's working to enhance this with an option to send photos and videos that auto-erase upon viewing.

The system works almost exactly like Snapchat - after swiping right from the home feed you can take a photo or video, then tap the arrow to send it privately. In addition you can also choose to send it to a group (which you can't do in Snapchat). 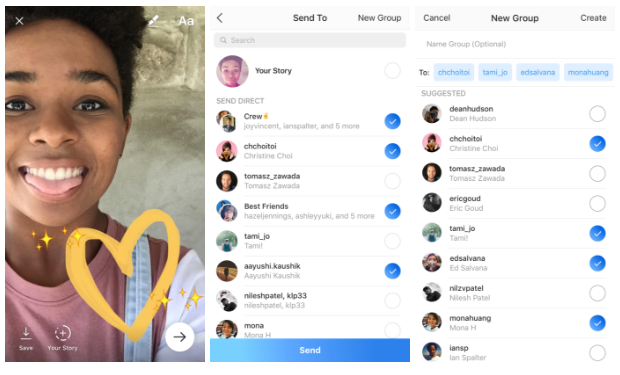 Recipients can replay each message once and you'll get a notification if someone's taken a screenshot or replayed any message you've sent.

Messages will come into your new-look inbox, with a paper airplane icon added to the top right corner of your feed.

"You'll see disappearing photos and videos in a bar at the top. Tap the ones with blue rings to see what your friends sent you. In a group, you can see everyone's responses - and who else has seen them - in a slideshow format. Then when you're done, just tap their faded profile photo to send a quick response." 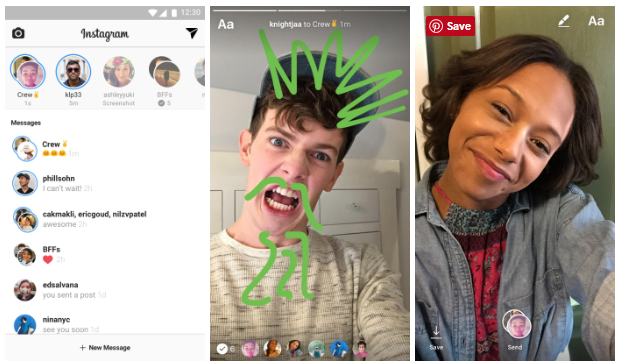 Having both types of messages in one inbox could take some getting used to, but as shown in the above image, there is differentiation between them.

And an interesting note - Instagram's also considering how to incorporate direct live-streaming in private groups, which could add another element for consideration.

There's a lot to take in here, a lot of different options and tools to consider. And while the new features will also bring additional brand and marketing considerations, the tools are clearly more focused on individual sharing, as opposed to broadcasting. This doesn't mean they can't be used for brands (we're unsure if the new options will be available to brand profiles at this stage), but boosting brand connection is clearly not the main focus.

How much of an impact the new options will have, in terms of winning more audience from Snapchat, is also difficult to determine. Instagram Stories has already proven popular, with more than 100 million people using Stories every day - though it is interesting to note that Instagram touted that number less than a month after the launch of the feature and hasn't updated it since (they re-stated the 100 million user count in today's announcement).

Boosting intimate sharing seems like a good move on this front, as that's obviously proven a winner for Snapchat - but at the same time, the addition of more innovative enhancement features like MSQRD video masks seems like another key step to boost Instagram Stories and put them on par with the yellow ghost. Snapchat just released their latest variation on this front, in 'World Lenses' and looks set to eventually take their augmented reality features to the next level through their newly launched Spectacles product. It's cool, hype-driving features like these that keep people coming back to Snapchat, and which have enabled it to compete and take market share from the established players.

As such, I'd expect to see more updates for Instagram stories over the next 12 months, but at the same time, Instagram needs to also be careful that they don't stray too far from their image-based roots.