If there's one thing you can be assured of, it's that the landscape of Facebook is always changing. Back in April, Facebook noted that they'd heard user concerns that they were missing important updates from friends and pages they care about due to the News Feed algorithm automatically determining which content they were to be served in their feed. At that time, Facebook announced a change to the algorithm to ensure posts from friends received more prominence in the News Feed, but it seems that hasn't produced the desired effect. To better balance this, Facebook has unveiled a new way for users to have more say over what content gets priority in their News Feeds, enabling them to ensure they never miss any updates from friends or Pages they want to hear from. It's a more user-friendly, and potentially very powerful, way for users to re-take control over their Facebook experience, and goes some way towards reconciling one of the major pain points for users in recent times - the issue of being told by Facebook what's important to them.

In November last year, and in response to growing unrest about the News Feed algorithm filtering out relevant content, Facebook enhanced the controls it offered users over their News Feed content. They improved the News Feed settings, enabling users to see the content they'd been shown in their News Feed over the past week, a listing which could be filtered by Pages, People or Groups. From there, users could easily tick and untick the content they were more or less interested in seeing more of, streamlining the content selection process. In an effort to increase the utility of this feature, Facebook has upgraded it, with a new, animated crab to lead you through the process, and new presentation features, enhancing it's over usability.

The improved News Feed Preferences section now makes it easier than ever for people to control what they see and who they see content from in their News Feed, which should alleviate at least some of the concerns about Facebook's algorithm dictating what's important and what's not. This has been highlighted as one of the main reasons more users have migrated to other platforms like Instagram, where there's no such filtering - if you follow a user, you'll see their content. Facebook will be hoping that this update appeases such concerns, whilst also enabling them to improve their data targeting.

A Friend in Me

There are four options set out in the upgraded News Feed Preference format:

In "Prioritize Who you See First", users are shown a listing of all the Friends and Pages from which they currently see content in their News Feeds. From here, users can quickly and easily choose who they want to see more content from, specifically, by tapping on their profile image - when tapped, the profiles you choose to see more, or essentially all, content from will have a blue star appear in the top right of their image. This is effectively a priority star, ensuring any new content from these people or pages will be shown at the top of your News Feed - a blue star will also be shown on their posts, highlighting them as favorites. 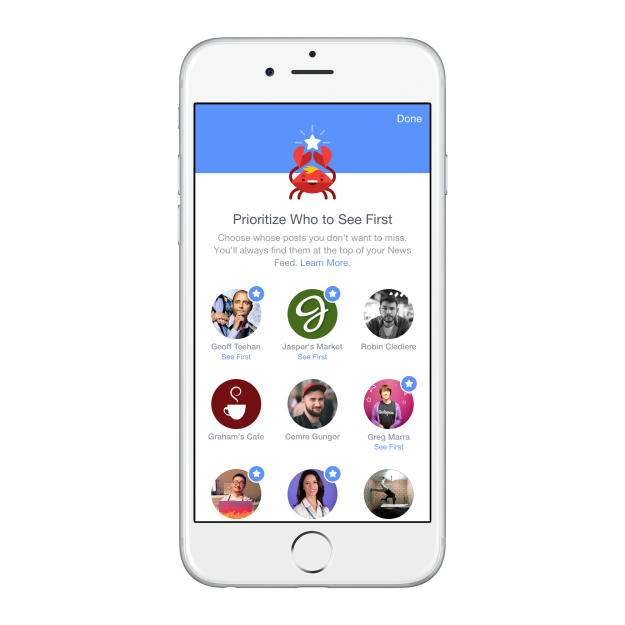 For brands, this could provide a significant boost - organic reach for Pages has dropped to miniscule levels, with most lucky to be reaching 10% of their overall audience. By enabling users to select Pages, specifically, this could result in much higher reach. Of course, the onus is still on brands to produce great content that people want to see, they won't be "starring" your profile without good reason, but brands could take the opportunity to educate fans on how they can utilize this new function to ensure their content is seen. Depending on take-up, enabling selection like this could lead to significant reach increases for some Pages.

What Zuckerberg giveth, Zuckerberg also taketh away. The second element, "Unfollow People to Hide Their Posts", enables users to more easily de-select Pages and profiles from whom they don't want to see anything more from. Take note: if you're producing content that people are not engaging with, that people don't really care to see, this now makes it that little bit easier for users to tune you out completely. 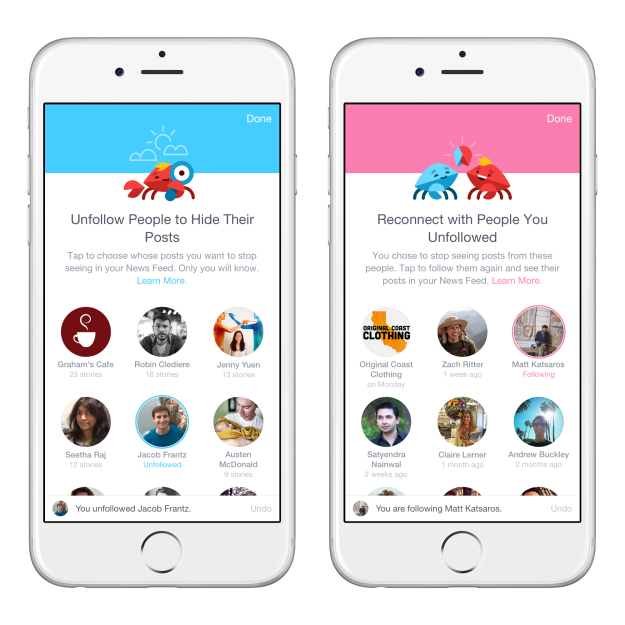 This feature shows all the people and Pages you've seen content from in the last week, so it'll be fresh in mind whether you were interested in their content or not. Just as you can with the first option, tapping on these profile images will take them out of your News Feed rotation, ensuring you see nothing more from them. To soften the blow, Facebook has also made it easier for users to re-connect, offering another option, "Reconnect with People You Unfollowed", so users can see a listing of the people and Pages they've cut in order to re-connect. I'm not sure how much this will be utilized - most of the time, when you've actively switched someone off, you've done so for a reason, and seeing their face is likely only going to remind you of that annoyance. Maybe, as suggested by Kate Knibbs over on Gizmodo, the feature's actually designed to "let us gloat over those we've surreptitiously cast aside", rather than seek News Feed reconciliation.

One of the most interesting elements of the new feature is the totally new addition of a "Discover New Pages" option, a listing of recommendations based on the types of Pages you've liked in the past. 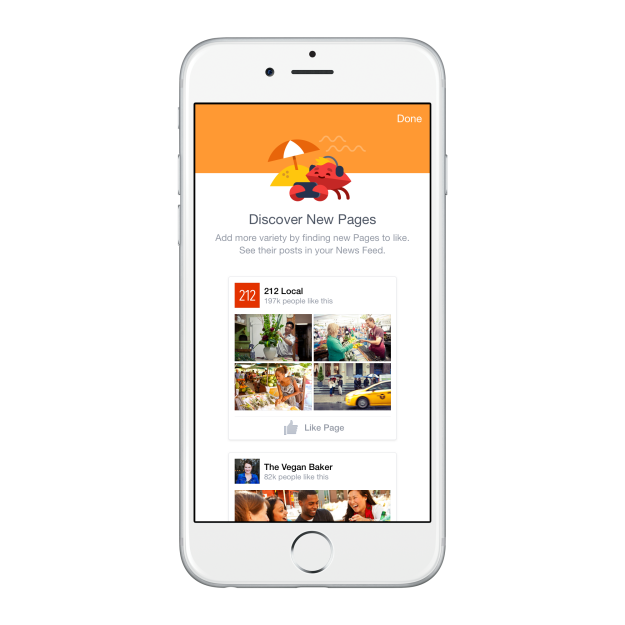 What's particularly interesting about this addition is it's solely focused on Pages, on getting users to like Pages and receive more content from them. This is something of an unexpected move from Facebook, who have been all about restricting the reach of Pages in recent times in order to push brands towards their advertising options in order to secure reach. This feature, on the face of it at least, appears to be actively seeking to boost organic reach for Pages. Now, overall, of course, it's beneficial for Facebook to have more people engaging with more content, so showing them Pages they might be interested in makes logical sense, as it increases the likelihood of people staying on-site longer. But partnering this addition in with the option to mark any such pages as priority - as Pages from which people want to see all content from - will increase opportunities for greater organic reach for those Pages. Obviously, Facebook's taking the view that improving the user experience is more valuable than pushing Pages towards ad options in this regard - and the feature will also likely benefit publishers on the platform by boosting their reach (and having more publishers post direct to Facebook is a big deal in the grand scheme of the network). Either way, this is an interesting addition, and one which can only benefit brands utilizing Facebook to connect with their audiences.

Overall, the upgraded News Feed Preferences options seem like a functional and logical way to enhance user experience and alleviate some of the ongoing grumbles about the intrusive nature of the News Feed algorithm, while also giving brands increased opportunity to get more organic reach among their engaged audiences. The bigger question is, will people use it? In the past, Facebook has gone to great effort to give users more control over privacy settings and personal preferences, but many of those have been largely ignored. This often works in Facebook's favor - people's concerns about data tracking are alleviated by the knowledge that they have a say in what data is made available, even if they do nothing to actually restrict it. In this sense, this addition can only have a positive effect for Zuckerberg and Co, as it puts more control in the hands of users, enabling them to decide what they'll be shown and whose content is more important. Whether they opt to do so is another story entirely.