Facebook has released its Q2 numbers, and the results uphold The Social Network's place atop the heap among social media networks. First up, Facebook's Daily Active user base grew by 32 million to 968 million over Q1. 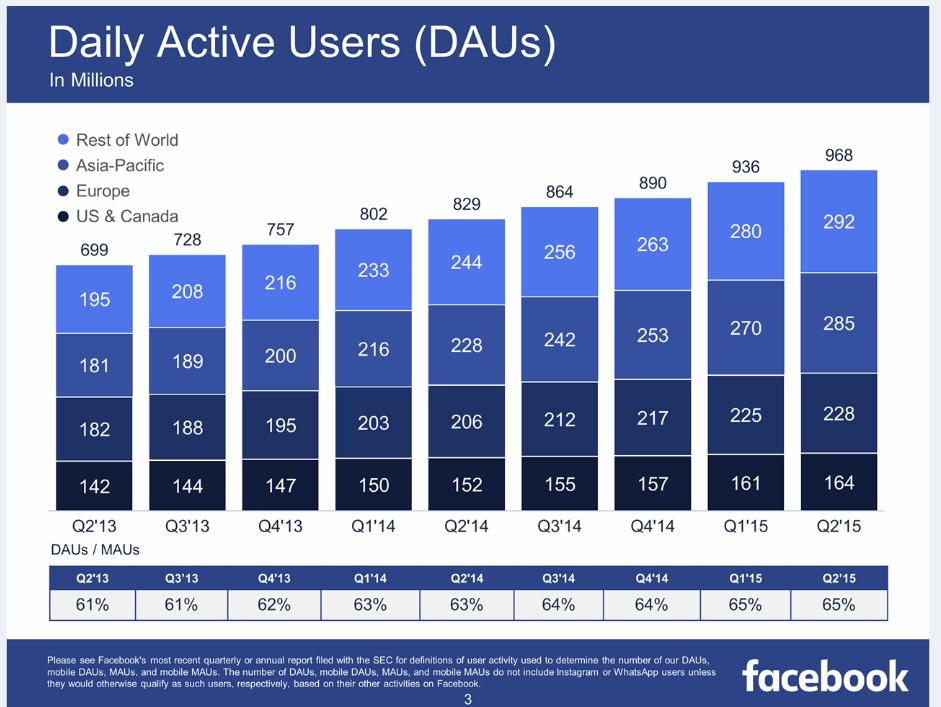 While this is not as much growth as Facebook saw in Q1 (+46 million on previous quarter), the growth rate is still very strong. The biggest growth was in the Asia Pacific region, where Facebook saw an increase in DAUs of 5.6%. In terms of Monthly Active Users (MAUs), Facebook increased their overall active user base by 49 million, or +3.47% - which also equates to a 13% increase on one year ago. 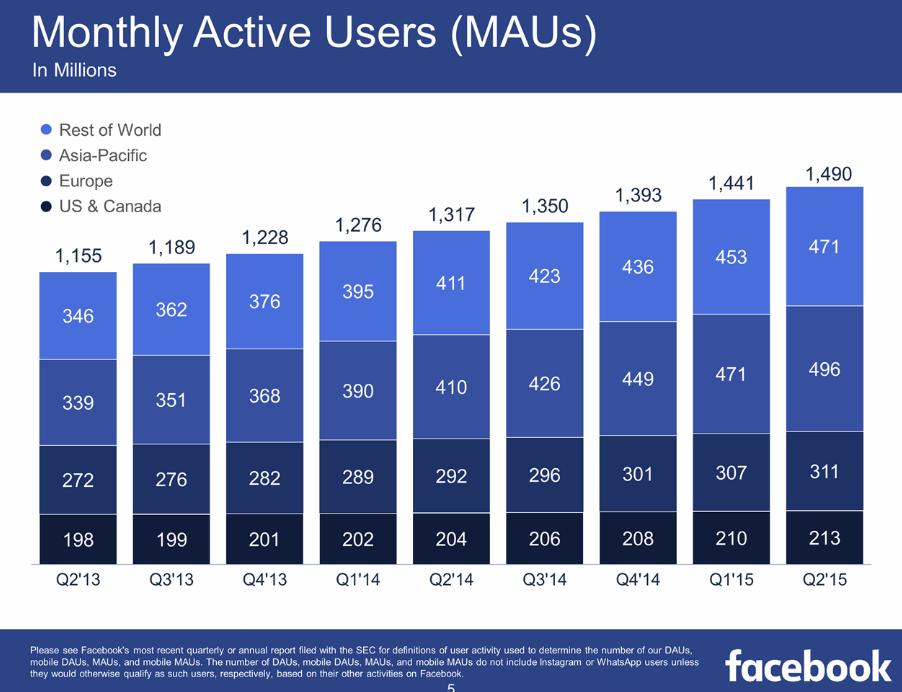 Engagement, meanwhile, came in at more than 46 minutes, per day, on average across Facebook, Instagram, and Messenger. 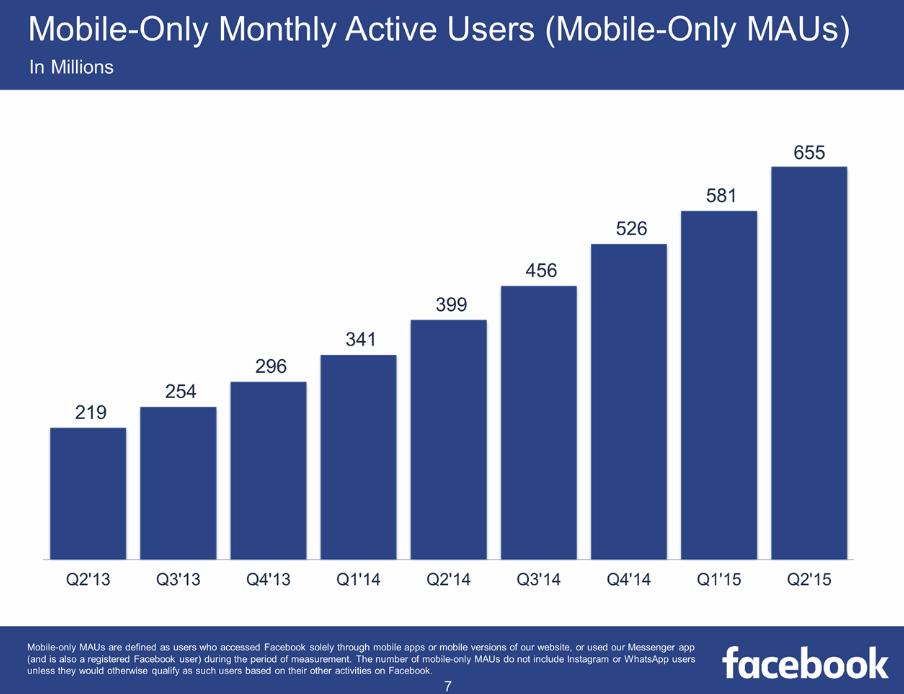 In terms of revenue, Facebook's overall intake hit $4 billion for the first time, though expenses from investments came in at $2.77 billion, up 82% from the same period last year. 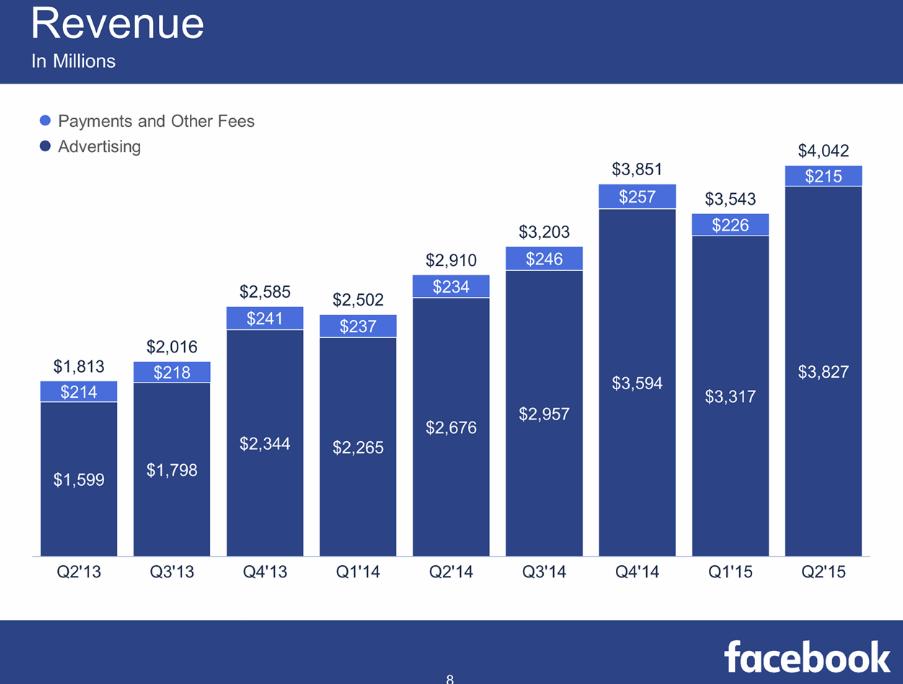 Average Revenue Per User (ARPU) also increased in all markets against the previous quarter. 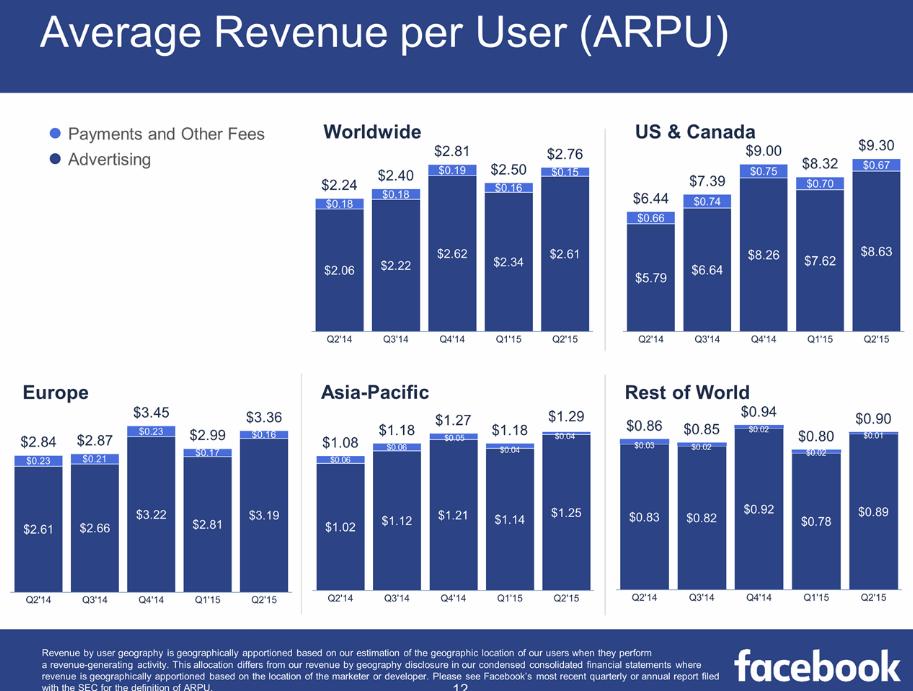 While the increase in investments reduced the overall margin (Facebook spent $1.17 billion on research and development in the quarter-up from $492 million in the equivalent period last year) market analysts seemed content with the future direction and opportunity of the company, with the share price initially falling, then stabilizing after today's conference call.

In today's conference call, CEO Mark Zuckerberg outlined his key takeaways from the Q2 numbers, highlighting their high levels of on-platform engagement and significant increases in overall ad revenue (43% growth, 74% growth in mobile ad revenue). Zuckerberg said the focus is now on building their networks to maximize their benefits for user and ad partners.

"Over the next few years, our main focus is on helping our existing communities and businesses reach their full potential"

Zuckerberg also praised the improved performance of their apps, saying they've reduced crashes on iOS by more than 30% and messages delivered via Facebook messenger are now being delivered 20% faster.

Zuckerberg also discussed the growth of video content on the platform, noting that "connecting people with more great video content is an important part" of their overall strategy. Zuckerberg said that since the start of the year, Pages are now sharing over 40% more videos, and noted that they've adjusted the News Feed algorithm to show people more video content as a result of growing demand.

Interestingly, Zuckerberg also made special note of Facebook's efforts to "connect more people around important public moments and events", which could be seen as a push towards Twitter's core market offering, in coverage of real-time events. Zuckerberg went a step further along these lines when discussing Instagram, saying that the platform is becoming "one of the best places to get a real-time snapshot of the world". The angling of these statements suggests that Facebook is going to push Twitter on this front, that they're not going to let Twitter hold the crown as the real-time information source without a battle - and given their audience numbers, they definitely hold some sway in the conversation (there was also a question in the Q and A section of the presentation about Facebook possibly increasing focus on real-time coverage and conversation, but clarity was largely avoided in response).

Zuckerberg also noted that they're pleased with the growth of WhatsApp, which they continue to develop, discussed the current state of Internet.org and talked up the potential of the Oculus Rift, which will be available in the first quarter of 2016.

Facebook's COO Sheryl Sandberg noted that mobile ad revenue has increased 74%, year-over-year, making it over three quarters of total ad revenue, with strong revenue growth in North America and the Asia Pacific in particular. Sandberg discussed the shift to mobile, saying that Facebook continues to get more than one out of every five minutes spent on smart phones through its apps. Sandberg praised their mobile ad platform, saying they have the best performing mobile ad product on the market, and video is making it even better.

In her presentation, Sandberg made special note of Under Armour's "I Will What I Want" and Procter and Gamble's "Like a Girl" campaigns and how they utilized Facebook's ad platform to maximize their results.

Sandberg said that 40 million SMBs now have Facebook pages, and they're working to help them maximize the opportunities of the platform. Among those SMBs is Krystellie Fashion, the owner of which Sandberg met on a recent trip to the UK, and Sandberg used the business as example of what can be achieved via Facebook advertising:

"One of the business owners I met was Kelly Wright, a single mom who started selling dresses from her home. She began by shooting videos of her dresses on her mobile phone and promoting them on Facebook for just a few pounds. Using Facebook as her only marketing tool, Kelly grew her business, Krystellie Fashions, to over 3 million pounds annually, and she now has ten employees"

Much of the interest in Sandberg's area was on Instagram, with several analysts using the Q and A section of the presentation to ask about the upcoming ad options on the visual platform.

"[We're looking to introduce] more formats, like direct response, and more ways to buy, like self-serve. That said - and it's important to understand this - while we think there's a lot of interest and great opportunity, we're going to be really thoughtful and strategic about how we ramp revenue"

One particularly interesting query came from an analyst from Macquarie Bank, who asked whether Facebook would be looking to develop more standalone apps, given the success they've seen so far with this option. In response, the Facebook team said they wouldn't rule it out, but they didn't have "anything specific to talk about today", noting their investment strategy is in growing communities around Messenger, WhatsApp and Instagram, primarily.

Overall, this was another strong report from Facebook, and a strong statement about where they're at and the future potential of the platform. With increased monetization options coming from Instagram and opportunities in areas like virtual reality, the future of The Social Networks looks very bright.