For the first time in 16 years, Google is giving its iconic logo a refresh. Taking on a more rounded, simplistic look, the new logo looks similar in design to the font used in the recently unveiled logo for Google's new parent company Alphabet.

In an official blog post, Google's design team have outlined the many considerations and calculations that came into play when designing the new logo.

"Since its inception, the Google.com homepage has been strikingly simple: The quirky, multicolored logo sits above a single, approachable input field on a clean white canvas. But as technology moves forward, the canvas itself is changing, and the inputs and needs are becoming more diverse. New classes of devices and ways to interact and communicate have emerged with wearables, voice technology, and smart devices in the world around us. Users now engage with Google using a constellation of devices, and our brand should express the same simplicity and delight they expect from our homepage, while fully embracing the opportunities offered by each new device and surface."

Google also confirmed that the new logo will no longer be a static image, with animations to be used to signify different actions being undertaken by Google, when they're in progress. Four colored dots will morph into different shapes. 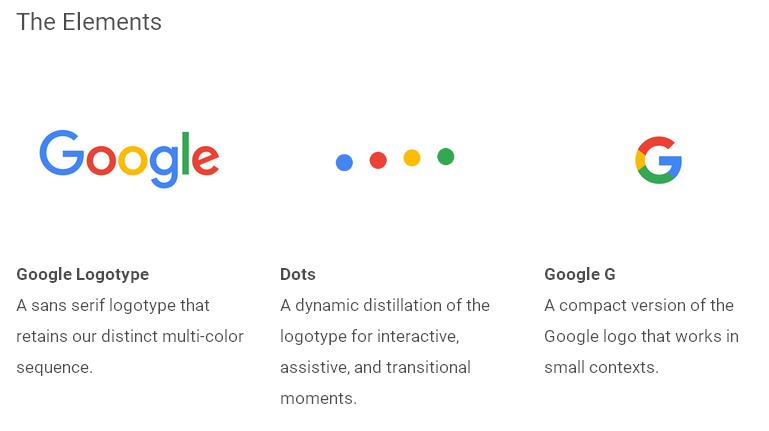 For example, when using voice search, the logo will change into four colored lines which will move when the user speaks.

The announcement details this change, saying the logo will represent when Google is working for you:

"We consider these unique, magic moments. A full range of expressions were developed including listening, thinking, replying, incomprehension, and confirmation. While their movements might seem spontaneous, their motion is rooted in consistent paths and timing, with the dots moving along geometric arcs and following a standard set of snappy easing curves."

The changes will come into effect across all Google products from today - Google+ announced showed off their new look via Twitter:

We're getting a little logo love today too. Hope you like it! http://t.co/pdcZPKYodq pic.twitter.com/lhwjxtf5NY

While a logo itself doesn't change anything much within an organization, Google's update does take on some level of extra significance, particularly in conjunction with the announcement of Alphabet. The new logo signifies Google's move to keep in step with how users now interact with their products and services, and signifies something of a new era at the search giant. Now, that doesn't necessarily mean we're going to see any new updates or system changes coming out of 'The Big G' anytime soon, but it does give the company a fresh start within the new structure, and with new CEO Sundar Pichai.

To mark the logo announcement, Google has also released a video showing the evolution of the Google brand, which is an interesting look back at what was, on the day we're shown what will be from now on as Google moves into it's new future.