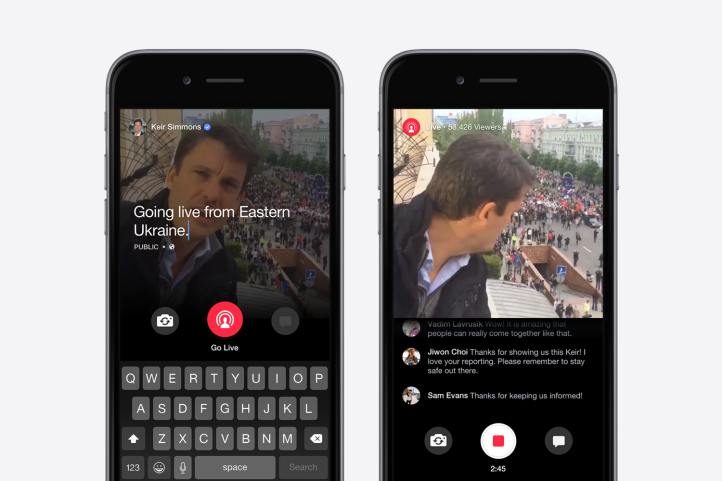 In a discussion on Blab recently, a group of social media pros were talking about the potential of live-streaming and what's coming next. The consensus view of that group, which included some highly active live-streamers, was that Facebook, if it so decided, could dominate live-streaming very quickly if it spent time refining it's live-streaming option - currently only available to celebrities through Facebook Mentions - and gave access to everyone. Facebook's audience dominance, highlighted by its 1.49 billion active users, is just too much, there's no way anyone would be able to compete if Facebook gave all those users access to such functionality, if they did it right.

But giving everyone access to live-streaming on Facebook is a risk. Too many people streaming poor quality content might turn users off and lead to complaints, and likely, algorithm shifts to downgrade it's reach. In this sense, giving access to celebrities is a great starting point, as it'll give those influential users a chance to showcase how live-streaming can be used and what it's value is, with high reach potential, before Facebook opens the flood gates to everyone. If that's, of course, Facebook's plan at all. Is Facebook even looking to provide an on-platform, live-streaming service to all users?

While their true plan for live-streaming is not yet clear, Facebook have today announced that they're going to give access to Mentions and Live Streaming (just called 'Live' on Facebook) to a wider range of users. Access will be granted to 'public figures' - which basically means anyone with a verified profile. And while that's still somewhat restrictive, the main aim of this update is to provide access to journalists in order to encourage them to share more content direct to Facebook.

As noted in Facebook's official announcement, journalists and public figures will now be able to use Mentions to:

Post publicly or share with your followers.
Whether you're sharing text, links, photos or something else, Mentions lets you choose the audience you want to share with. For example, you can share a post so only your followers see it in News Feed.

There's two key areas of focus here. Tthe first is reporting live, and for Facebook, the benefit here is obvious. The more content posted direct to Facebook the better, as it means more people will be on Facebook for longer accessing that exclusive material. If journalists get a good response to this content - which, as noted, Facebook can ensure by boosting the reach of such posts - they'll be more likely to post more often, and maybe, eventually, they'll even start to rely on that audience reach as part of their regular routine. Building a dependence on Facebook reach can be problematic, as we know, but such is the ever-present lure of The Social Network - unmatched reached with easy, immediate response.

The second point of note is the ability for Mentions users to share their content with specific audiences. As noted by Josh Constine in his post (and Facebook Live video) on TechCrunch, this has long been an issue for journalists looking to better utilize Facebook. For example, I write about social media marketing, something few of my Facebook friends care too much about, so I rarely post my articles to Facebook to avoid spamming them with content they're not interested in. This update gives me the option of sharing my Social Media Today posts with only my followers, which will enable me to better utilize Facebook for professional purposes.

It's a welcome update for journalists, and goes further to underlining the why of this announcement - to get more exclusive content within Facebook's eco-system.

In addition to the announcement, Facebook has provided a link for people to fill out if they're a public figure (or journalist) and want to be considered for access to Mentions. Word is that Facebook will be looking to approve a new round of verifications to expand the use of the new features, so if you think you're worthy, give it a shot (you need to provide a copy of your photo ID and a link to your official website so they can check you out).

The expansion of access to Mentions and Live is not surprising - when Facebook first launched its live-streaming option, many suggested that it would only be a matter of time till they provided this functionality to all users, and that they'd be taking their time to ensure they got it right and didn't overwhelm people's News Feeds. This announcement supports that view, and shows that Facebook does have expanded plans for live-streaming.

(Also, 10 points for anyone who got the 'Sneakers' reference in the last sub-head)