Given Facebook's push to become the leader in online video, it was probably only a matter of time till they introduced their own live-streaming functionality. In an official blog post, Facebook has introduced a new live video element for Facebook Mentions, the celebrity-only app that enables public figures to interact with their fans on The Social Network. Yes, that means only those approved for Facebook Mentions (people with verified profiles) can utilize live video on Facebook. The rich and famous get all the perks. 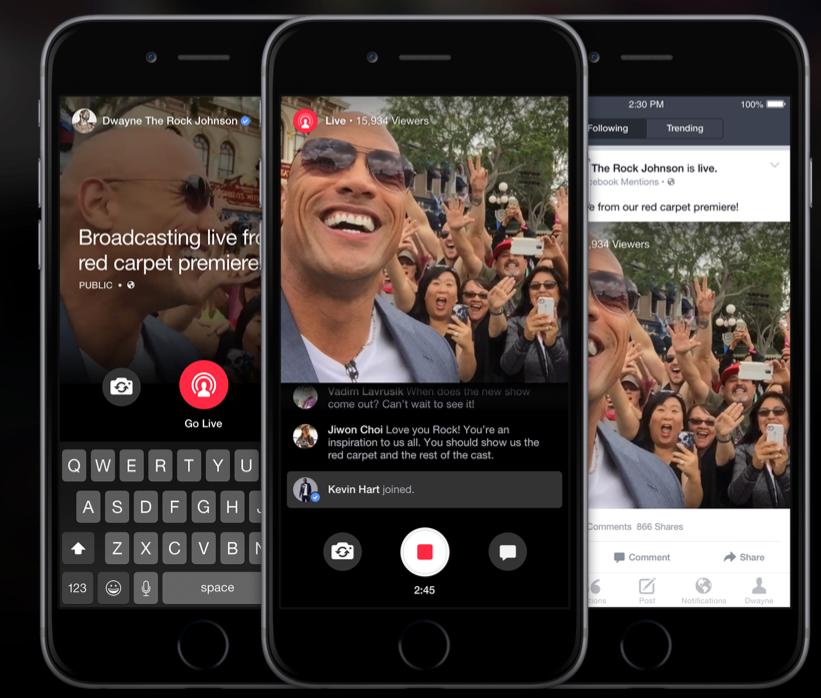 The functionality is all very familiar to those who've used other live-streaming apps, seamlessly integrated into the Mentions interface. Mentions live streams are also embeddable, so you can share your stream to other sites.

Facebook has reportedly been developing its live-streaming functionality since September last year, though it's kept quiet amidst the hype around other streaming providers. The reason? Just as Periscope was working to refine and improve their app before taking on Meerkat, Facebook's team have been busy figuring out the best way to maximize their live-streaming player, with a big focus on improving the commenting features. Commenting may seem like a minor element of the streaming experience, but that, of course, depends on who you're aiming your product at - celebrities, for example, might have certain preferences in this regard that, if catered for, might just increase the chances of them utilizing such a feature.

As a result, Facebook's live-streaming option comes with advanced moderation features that enable broadcasters to keep their live streams "clean": Facebook will only push comments to the broadcaster's screen at a steady pace, so they can respond to each, and celebrities can turn off comments altogether if it's not to their liking. Offensive comments will be hidden and they can also add words to their Page's moderation blacklist to avoid topics they'd rather not discuss.

These are small details in the scheme of things, but Facebook, which has been dealing with large-scale celebrity pages for a long time, obviously knows what options public figures prefer in this regard, and they're likely to see more take up of their streaming functionality as a result.

Still at lunch on 6th Av

So given the obvious similarities to existing live-streaming apps, what makes Facebook think public figures will stream via this option, as opposed to the others?

In a word: scale.

Over 4 billion videos are now viewed on Facebook every day, and, according to Facebook, thousands of celebrities are highly active on Facebook Mentions. Given that these public figures already have established audiences on the platform, and are already interacting with those audiences via this method, live streaming directly via Mentions is a logical next step.

On top of this, Facebook gives them the widest potential reach of any network, and Facebook has worked to ensure live-streamed video posted via Mentions gets maximum reach.

Obviously, live broadcasts will appear in the News Feeds of subscribers of that celebrity's page, of which many have millions of fans already. But on top of this, Facebook will also send out alerts to users who've recently interacted with that celebrity's page, greatly increasing the reach of that content. This will likely see these videos get massive view counts and attention, sparking those celebrities to do more and maintain that link with their audience.

In essence, no one will be able to compete with Facebook on this front - Facebook's audience reach is way beyond any other network and that fact will likely prove the clincher in the live-streaming battle, at least for celebrity users. But what about for us regular-folk - will we get a chance to stream live content to our Facebook friends?

While live-streaming is only being made available to celebrity users right now, you can pretty safely bet that it'll be rolled out to all users at some stage. But Facebook's taking a more cautious approach to this - likely to avoid an influx of random streams flooding people's News Feeds.

In this regard, Lavrusik told TechCrunch that:

So really, it's just a matter of time - Facebook will see how live-streaming content goes with celebrities first, then use that feedback to refine their wider offering.

Focusing on celebrities first also ensures those users are given exclusivity, which no doubt makes them feel important (a win in itself) but also means Facebook can put more of a focus onto those live streams, specifically. As celebrity streams are far more likely to attract huge audiences, highlighting them, without overloading the network with an array of live videos from all users, will give Facebook more opportunity to display the benefits of this offering and how it can be beneficial. This will also likely mean higher view counts for those public figures who do utilize this option, and higher view counts will mean more broadcasters, and repeat broadcasters - which will mean more audience attention and more advertising potential for Facebook.

Rolling out to celebrities first makes good sense, but you can expect to see a wider live-streaming rollout on Facebook in the near future, a development that'll no doubt be playing on the minds of both Periscope and Meerkat till it becomes a reality