Have a Question? Why Not Poll Your Twitter Followers with New Feature

Around a month ago, reports indicated that Twitter was experimenting with a new polls in tweets feature, enabling anyone to poll their Twitter audience on... well, anything. Today, the micro-blog giant has confirmed that polls will be made available to all users, rolling out from today across iOS, Android and the web.

Coming soon! We're rolling out the ability for everyone to create polls on Twitter: https://t.co/pH5a8q9Ujz pic.twitter.com/ijAKEMUdf1

"We're excited to share that in the coming days, everyone will be able to create polls on Twitter. And, with just a couple of taps, people can weigh in on all the topics they care about.

If you want the public's opinion on anything - what to name your dog, who will win tonight's game, which election issue people care most about - there's no better place to get answers than on Twitter. For poll creators, it's a new way to engage with Twitter's massive audience and understand exactly what people think. For those participating, it's a very easy way to make your voice heard." 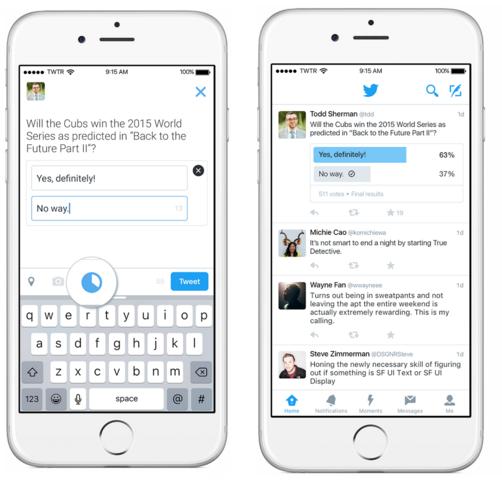 As shown in the above image, polls will be available from the tweet composition window by clicking on the pie icon. You'll then be able to enter two response options for your poll - at present, there are only two options available per poll. Each poll will remain active for 24 hours and no public information will be released about participants and how they voted. When the poll closes, a push notification will be sent to all of those who voted, prompting them to check out the final results. 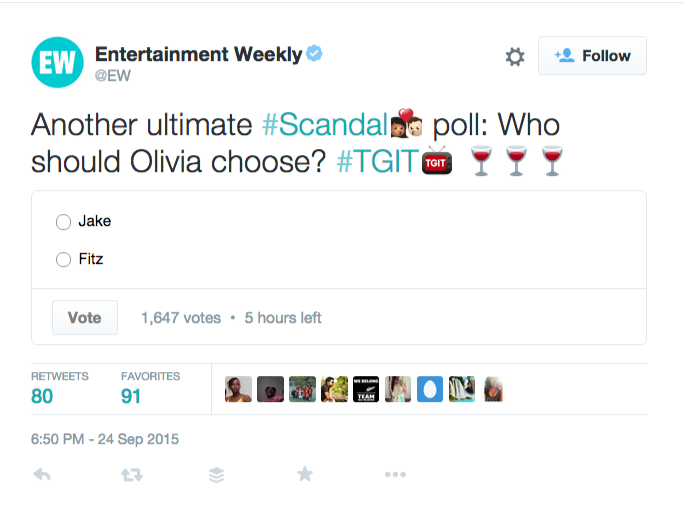 The addition of polls is interesting, though it's hard to say how welcome or effective they'll be. For brands, you can definitely see the value - they'll be able to get quick feedback on campaigns and queries, whilst also providing them with a new opportunity to generate engagement. But for individuals, there is a risk that we could see an influx of random questions which may impact overall user experience. That would likely die down after the initial novelty has worn off, but it'll be an interesting element to watch, particularly in the early stages.

The key to the effectiveness of Twitter polls will be engagement. If you can get, say, 200+ genuine responses to a poll, that result would likely be indicative and may help inform decision making, but the data could easily be skewed by low respondent numbers, and if that happens early on, polls won't catch on and won't be widely utilized as a result. Then again, users have been putting together makeshift Twitter polls for years, using the old "RT for yes, Fav for no" formula - a quick search on Topsy shows me that this has exact phrase has been tweeted out more than 137,000 times in the last month, so there's definitely demand for a poll option there.

The new polls feature was one of the first announcements of the day at Twitter's Flight conference, being held in San Francisco today.

Starting today, everyone will be able to create Twitter Polls #TwitterFlight pic.twitter.com/cechB6x2ic