Last month, Facebook announced that all users will soon be able to live-stream in 360 degrees, adding a whole new interactive, engaging element to their Live offering.

Twitter announced the same two weeks later, starting with a select group of users with a view to rolling out 360 live-stream capacity to everyone in the near future.

Which is cool, right? It's an interesting consideration. But then again it's also beyond the capacity of most businesses - you can't just go and start sharing your own interactive 360 live-streams. Right?

Right now, not everyone has access to the option, sure, but the arrival of these new 360 video options is just the latest step in the evolution of video content, an evolution that all businesses should be considering, not just in terms of what it means for future developments (VR), but also in regards to how they can use such trends to their advantage - and maybe even get in early to boost their profile and presence.

And while 360 degree video may seem technically - or financially - beyond your capacity, it may not be as far off as you think

Once you've obtained a recording option, the next technical step is in actually broadcasting, creating compelling, professional looking 360 content. To help with this, Facebook's published a new guide, based on tips from the Associated Press, on how to capture 360 degree content.

And there are several valuable lessons of note - here are AP's key 360 tips:

Sounds a bit conceptual, right? But the point is actually very practical - with 360 content, your viewers can look wherever they want, all around you. So you need to consider their vantage point.

Dario Lopez, AP's chief photographer for Mexico and Central America, says that the biggest piece of advice he gives journalists looking to capture 360 content is to place the camera in a situation where a human would be.

"Make sure there's a lot going on around it and put it at eye level."

"The key is to place a camera in a spot that a human would want to stand and look around - but in a location or environment that is foreign or inaccessible to most viewers. In the example above, notice how the camera is placed as if it were one of the Venezuelans on the beach, or as a customer in the fish market."

The camera is the viewers' access point, so you need to consider how people will be able to see what they want - and that may not always be what you want to show them.

An interesting consideration for 360 content is that because the field of vision is expanded, traditional photographic approaches don't necessarily work.

For example, a typical photo or video of an event would be from the press pool, but that's not particularly effective with 360 content as you're only utilizing half of the view - if people look behind you, all they'll see is other journalists and cameras.

Because of this, AP advises their journalists to consider different shooting locations, ideally in areas the viewer couldn't get to themselves.

This enables you to capitalize on the full range of the 360 experience, and provide the viewers with a new, unique perspective.

3. "Shoot between one and six meters away"

Because of the way 360 content is captured, distance is a critical consideration.

"Shoot too close to a subject and they will get distorted. On the other hand, anything far away will appear small because of the fisheye lens."

AP's advice to their journalists is to maintain a distance of between one and six meters from the subject, while interviewees should be a meter away.

The separation enables greater perspective and ensures the focus doesn't get distorted.

4. "Be careful of moving the camera while filming"

Due to the immersive nature of 360 content, too much movement can be jarring for the viewer - and can even cause motion sickness when viewed in VR headsets.

While a level of movement is likely required, AP advises their team to ensure any movement is stable, and to use a tripod where possible.

Using a tripod is a particularly good tip, as it gives the viewer the opportunity to take in the whole scene as if they were there themselves, rather than turning around and seeing a close up of a camera operator. As you can see in this video, even a basic static shot of the scene can be effective - despite the lack of things happening on screen, the viewer can look around for themselves, which means the content doesn't have to always be in motion to be powerful (in fact, quite the opposite).

5. "Shoot for at least one minute"

This may be the best tip of the bunch - AP notes that each shot in every 360 video they make is at least 10 seconds long, which gives the viewer ample opportunity to look around and take in the scene.

In order to get a clean 10 seconds of footage, AP have found they generally need to film each scene for at least a minute - as AP notes, you'll often capture footage of reporters entering and leaving a shot, as well as random passersby getting too close to the camera.

Of course, this is far more difficult in live content, where what you're capturing is coming through in real-time, but even so, it's worth considering that you need to give your viewers the time and space to take in the detail, rather than rushing onto the next point to keep the video interesting.

This last point is more a 'goes without saying' note, but it's still interesting to consider AP's perspective.

AP calls on their team to continually experiment with 360 content. It's a new form of communication, no one has all the answers as yet, so you need to test and try new approaches to see what generates more engagement.

AP also notes that they forsee future growth opportunities in episodic 360 videos, along with Live 360.

"We see people are consuming these videos in large chunks of time on Facebook. The question is can we create regular features that are 10 to15 minutes, and have people go watch part two?"

This should be a key consideration within your own video strategy - generating engagement with a single video is interesting, but what can you do to maintain and increase that engagement over time with more content?

As noted, no one has all the answers, and being able to share your full range of vision adds a whole new element. There's no way to know what will and won't work unless you try - and these notes from AP provide a great starting point of considerations to keep in mind when constructing your 360 content and strategy.

While video content is the leader of the moment, and virtual reality is the future, the jump from the current passive to wholly interactive viewing experiences is not something that's going to happen all at once. This is why you've seen predictions of the coming age of VR tempered over time - a heap of prediction posts at this time last year proclaimed that 2016 would be the dawn of the VR age. 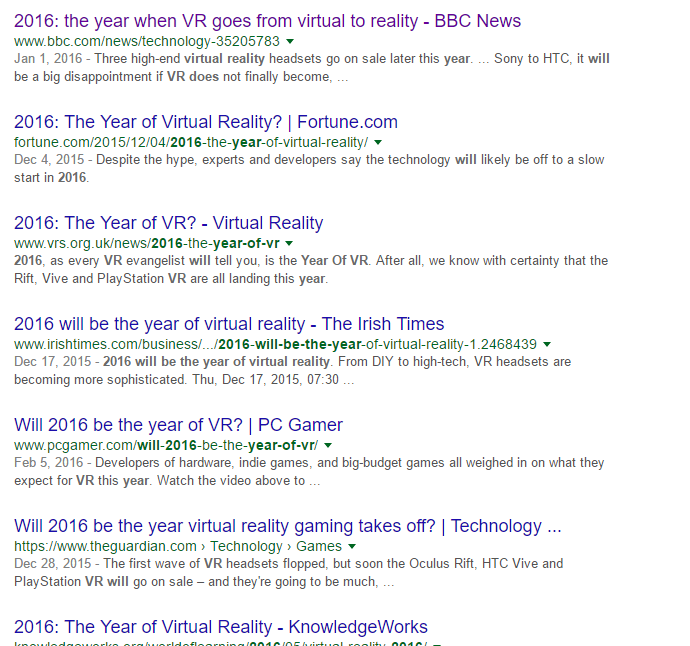 But of course, it wasn't.

That's not to say it isn't going to happen - in fact, all indications suggest that the VR age most definitely is on the way - but there are so many elements to the process, and not just from a technical standpoint, but from a consumption perspective also. Are people even ready to consume content in more immersive formats?

This is part of the reason why we're seeing tech companies pushing more interactive experiences like live-streaming - it's a means of getting people more accustomed to a new approach to content, one which enables them to take part in the proceedings, rather than just watching on. This is also why video games are a perfect avenue for VRs beginnings - as younger users grow more accustomed to participatory content, that will help usher in the next stage of the content shift. Just like social media before it, or the internet before that, eventually there'll come a time where younger generations simply don't know any different, where VR will just be how they've always consumed certain content. And that will be the most significant shift.

Since the dawn of time we've gravitated towards the mediums which best enable us to share our experiences, to enable others to understand our perspective on the world. This starts with storytelling, then written text, then still images and finally video. Virtual reality is an evolutionary leap in this context, and while it is on the horizon, it's worth considering how many iterations of each of these other processes we've seen before they've finally achieved ubiquity.

Virtual reality is a whole new world, but there'll be a lot of stepping stones between before we get there. And while you don't necessarily need to jump on each one, at least some of them are going to catch on and provide amazing opportunities for those forward thinking enough to take the leap.