The live-streaming battle is about to heat up - Facebook, which first released their live-streaming tool 'Live' to only verified profiles is now opening the option up to all U.S. iPhone users, as of today. 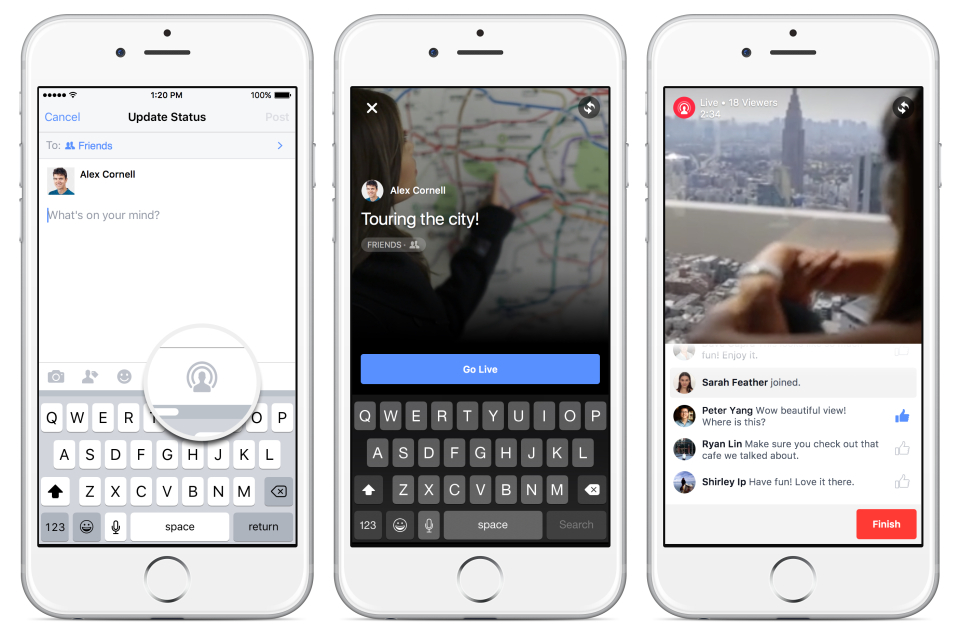 The process is pretty straight-forward, as noted by Facebook product manager Vadim Lavrusik:

"To share live video, tap on Update Status and then select the Live Video icon. You can write a quick description and choose the audience that you want to share with before going live. During your broadcast, you'll see the number of live viewers, the names of friends who are tuning in and a real-time stream of comments. When you end your broadcast, it will be saved on your Timeline like any other video, which you can then delete or keep for your friends to watch later."

That capacity, too, may be part of the reasoning behind Facebook's decision to slowly roll-out Live to all users - as with most product launches, the biggest demand and interest will be in the initial stages, so Facebook will likely see a big influx in demand for video services in those first weeks, which will die down, and reduce system demand, over time. As it does, that might then make it easier for Facebook to roll out Live to the next country, where they'll see another spike in use, then it'll peter off. This could, theoretically at least, enable them to better manage the additional load and ensure smooth sailing over time.

Live-streaming is the hot social media trend of the moment, with a heap of industry experts identifying it as one of the key trends they expect to see dominate the sector in 2016. And while the option undoubtedly has potential, one of its key stumbling blocks, thus far, has been reach and in generating enough momentum to cross over into the mainstream consciousness. If live-streaming can do that, the value of the offering will increase exponentially - and you can imagine that such a crossover could happen. But how, exactly, that might occur is not yet clear.

This is where Facebook may be holding some advantage - with the largest network (now up to 1.59 billion users) comes the greatest capacity to deliver audience reach, and thus, the best opportunity to generate more awareness of the offering. While Periscope has grown steadily over time (they reported that they'd reached 10 million users back in August), that pales in comparison to Facebook's network size. Periscope's recent announcement of increased integration with Twitter is definitely a step in the right direction, but even then, Facebook's audience potential is still much higher.

The question, at this stage, is about which platform can bring the most attention and take live-streaming to the widest audience - the bigger the audience, the more people (and brands) will be interested in using the offering. Periscope is currently the leader, but Facebook is circling, and they have wider plans for video content in the works that could change the game - including the development of a dedicated video platform and a possible TV/Facebook integration. Both, or either, could deliver significant benefits for live-streaming, and while Periscope still has a few options and plans up their sleeve, they may be out-matched, if Facebook looks to take over.

But of course, that's 'if', right now Facebook's still rolling out Live to the masses. And Periscope still has time to make some moves to keep their audience from moving across.