There seems to be a set of Facebook hoaxes that come up repeatedly, every nine months or so. And yet, despite them never coming true, people still freak out and share them like crazy, posting all sorts of false disclaimers and statements and spreading rumors which can quite easily be de-bunked.

A new set of Facebook hoaxes have gone viral this week, suggesting that Facebook is about to make everything you've ever posted public, that they're going to start charging you to access the platform, or some other insidious, movie-villain type plot that evokes images of Mark Zuckerberg twirling his mustache and cackling in the shadows. 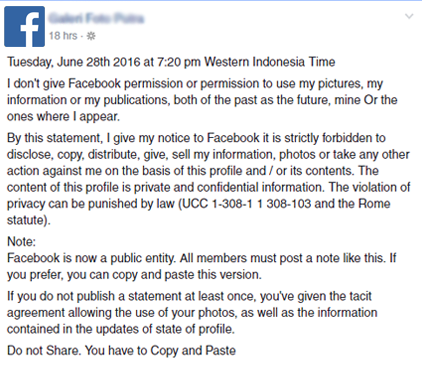 Of course, these aren't true, and there's any number of ways to investigate such claims - urban legend clarification site Snopes is a good source. In fact, this very hoax (above) has been around for more than seven years, repeatedly re-surfacing and scaring users into sharing some canned message of garbled legalese.

As noted by Snopes:

"First off, the "problem" this ineffective solution supposedly addresses is a non-existent one: Facebook isn't claiming copyright to the personal information, photographs, and other material that their users are posting to the social network, nor have they announced any plans that would make all Facebook posts public (even previously deleted ones) regardless of a user's privacy settings"

It's worth noting too that the legal sources referred to in this post - the Rome Statute and the UCC - refer to global laws determined by the International Criminal Court governing war crimes and genocide and the US Uniform Commercial Code, respectively. And neither is applicable to any aspect of Facebook usage.

But, nevertheless, that hasn't stopped hundreds of thousands of people sharing this update across Facebook, and hundreds of thousands last year, and the year before that. Given this, it feels somewhat pointless to point out that it's fake - as it's going to come up again - but to re-assure anyone with any outstanding concerns, it's not legit.

Even Facebook's been forced to clarify, posting this update to several of their regional presences this week.

How can we know this for sure? Because Mark Zuckerberg himself has stated it, 100% clearly.

"You will never have to pay for Facebook. We've made a commitment [that] Facebook is free and always will be. This is part of our mission to make it so that we can build a global community, so that everyone can be a part of it, and to make sure we can open the opportunities of the world up to everyone in the world, we wanna' make sure that everyone can afford to use our service, and we're not going to charge, which is why we're ad supported [...] that's how we keep this service free for everyone"

Of course, some more cynical folk might not see Zuck as the most trustworthy source on this, given Facebook's other changes to Page reach and privacy. But it's also stated, directly, on Facebook's Help Center.

And again, those who don't trust the word of Zuckerberg may see no further reassurance in the advice of Facebook itself - but what other, more definitive source, can you get? The guy who made the platform, who's in charge of it, he's said it won't happen. And really, it makes no sense why Facebook would charge for access.

Facebook, as noted by Zuckerberg, makes money from advertising. They're able to do that because Facebook has built the greatest audience insights tool in our history, with access to intricate data on every user, every person, gleaned from your Likes, updates and details. In order to maximize this, Facebook needs more users to be more active on the platform - the more people are on Facebook, the more data they have.

In this sense, charging for access is totally counter-intuitive to their wider aims.

And don't even get me started on that 'your icon will turn blue' note. What does that even mean?

Oh, and there was another one that circulated late last year - that Mark Zuckerberg was giving away his Facebook stock to randomly selected users.

This one probably makes the least sense of the three - but still, people shared it, people believed it. Some - I'd like to hope most - share such updates as a 'just in case' type thing. They know it's probably fake, but just in case it's not. Even then, it's still pointless, but you can see why some people might want to throw their hat in the ring. I mean, it costs you nothing to share a post or cut and paste a status update, right?

But then again, that, precisely, is why these spammers and scammers create these hoaxes in the first place, because it's so easy to get people to share something - it costs them nothing to share. And the pay-off could be huge. "Why not just share it?"

While the actual motivations behind each scam vary, those that ask you to Like and share the post are often being used by scammers to boost their Page engagement.

As noted by CNN:

"Once the page creators have piled up hundreds of thousands of likes and shares, they'll strip the page and promote something else, like products that they get a commission for selling. Or, they may turn around and sell the page through black-market websites to someone who does the same." 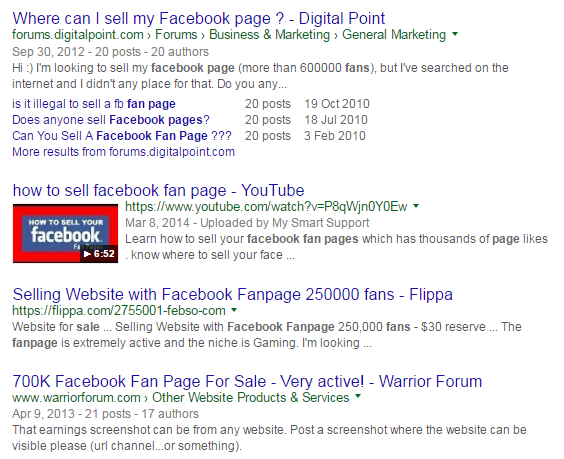 Another popular variation is free flights. 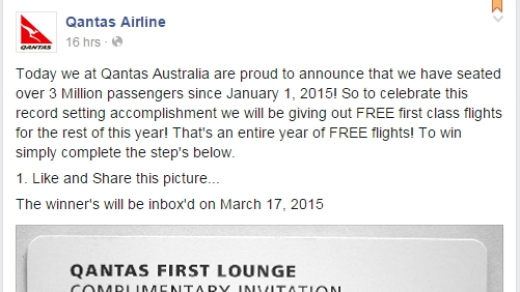 If you see these clearly Like-baiting posts, don't - really, you're just helping scammers.

And they're often easy to spot - in the above example, Qantas generally doesn't list itself as "Qantas Airline".

Facebook's always working to tackle such schemes - while it is possible to change the name of your Facebook Page, for example, if your Page has more than 200 Likes, you may need to apply to Facebook for approval (though some claim to know ways around this).

In terms of posts that ask users to cut and paste and re-share, these are more likely just pranks - though they could also be used to identify future targets. If someone's gullible enough to post such an update, they're probably more susceptible to a request to transfer gold from "the King of Nigeria", for example. As there's no connection back to a Page, by Liking and sharing, the risk is lower - though there have been instances where scammers have worked out how to embed code into the copied text.

It's less likely they'd be able to do this these days, but not worth the risk either way.

In any event, if you're ever not sure about whether something's legit or if Facebook's changing something significant or what Facebook can do with your info, you can check out Facebook's 'Terms and Policies' here. And if you see something which you think might be a scam, it probably is - avoid it and if you need clarification, check out Snopes or Facecrooks which both work to debunk such schemes.