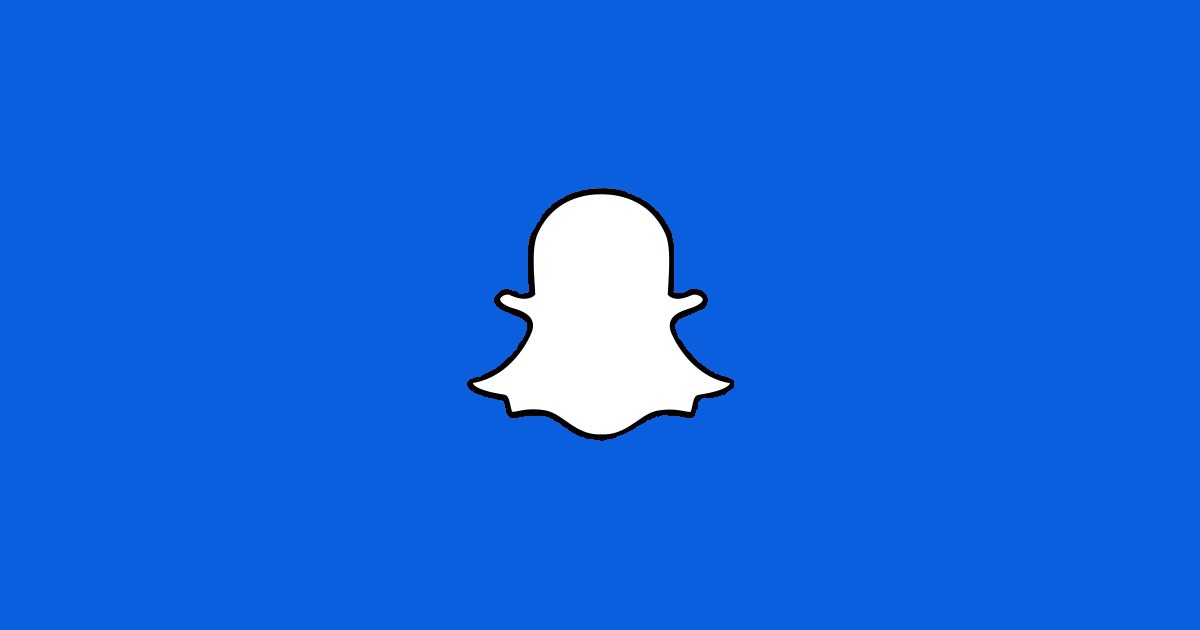 It's always a little surprising to see the response to Facebook's various Snapchat clones.

The Social Network released two more Snapchat duplicates last week, with Instagram's new Geostickers and the global expansion of 'Messenger Day'. And the reactions, on social as well as within tech media, have been as you'd expect.

"This is getting ridiculous"

Even Miranda Kerr, the supermodel fiancé of Snap Inc. CEO Evan Spiegel, hasn't been able to resist taking a shot at Facebook for their mimicry:

"Can they not be innovative? Do they have to steal all of my partner's ideas? I'm so appalled by that . . . When you directly copy someone, that's not innovation. It's a disgrace. How do they sleep at night?"

And those takes all make sense. Yes, Facebook is copying Snapchat. No, it's not overly innovative of them to rip-off another platform's ideas. But the logic behind Facebook's process makes is solid, and reflects a clear focus - not driven by Mark Zuckerberg's deep-seeded desire to challenge Spiegel, but by Facebook's ongoing need to solidify its market position.

Facebook's Snapchat fixation started back in in 2013, when Facebook, according to some, lost its 'cool factor', and thus, the attention of younger users.

Facebook detailed as much in their annual report (filed in February 2014), noting that:

"We believe that some of our users, particularly our younger users, are aware of and are actively engaging with other products and services similar to, or as a substitute for, Facebook. For example, in the third quarter of 2013, the best data available to us suggested that while usage by U.S. teens overall was stable, DAUs among younger teens in the United States had declined."

By Q4 2013, Facebook had amassed 1.2 billion monthly active users, meaning the platform was already reaching a level of ubiquity. Everyone was on Facebook, including your parents and grandparents, aunts and uncles. This, inevitably, made Facebook 'less cool' - you could no longer post all your random images from your weekend without fear of being questioned, while at the same time you were also seeing updates from your relatives in amongst those from your friends.

In addition to this, Facebook's News Feed was also becoming more crowded - not only were you getting more updates from a wider array of connections, but now there were also ads and marketing messages from brand Pages. To counter this influx, Facebook introduced their controversial News Feed algorithm, which also meant that Facebook was now exerting a level of control over the content you saw.

All of these factors combined lead to younger users seeking alternatives - many turned to Instagram (which Facebook also owned by this stage) a network that not everyone had caught onto yet, while messaging apps were also seeing a steep rise in usage, underlining the desire for more privacy. 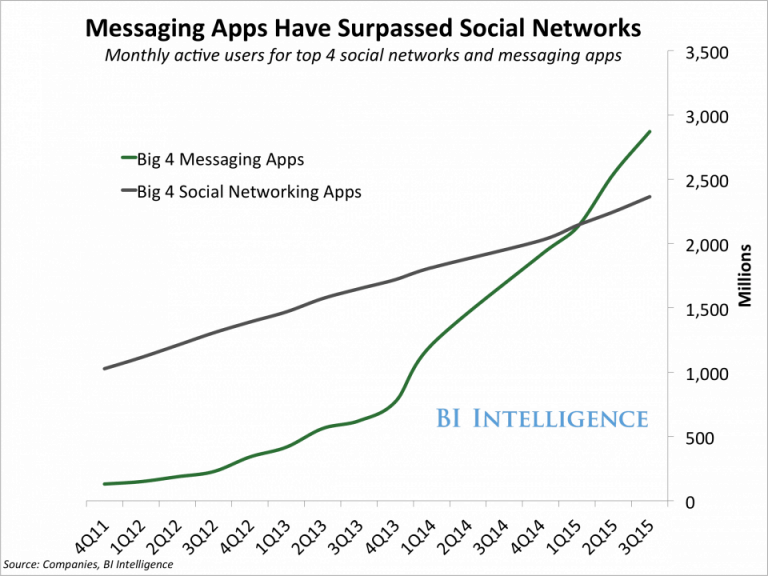 And then there was Snapchat.

Coming in just at the right time, right as this resistance to open social networking was growing, Snapchat appeared on the scene. Originally launched in 2011, Snapchat gained some 49 million users between late 2012 and mid-2014 - and the growth trajectory of the app mirrors the rise of messaging overall (except maybe that leveling off at the far right, after Instagram Stories was released).

In Snapchat, the youth had a new platform all to themselves, one which was built to cater directly to their interests. Discovery on the app was virtually non-existent, and the user interface wasn't as intuitive, not as straight-forward as other platforms. All of these factors added to Snapchat's youth appeal - and then you add in the controversies around sexting and disappearing content, the media coverage of which only boosted the app's notoriety.

Snapchat was defiant, a rebel - the anti-social network made for those in the know.

Given the surrounding context, and the app's proven knack for innovation, it's not hard to see why it gained such momentum.

As noted, even before 2013, Facebook was working to detect and eliminate any potential challengers to its dominance.

Facebook bought Instagram for $1 billion back in 2012, a deal which was much criticized for its excessive price at the time. Instagram had launched in 2010 and had gained 30 million users in two years - and worth noting, Facebook was initially looking to launch an Instagram clone to compete with the rising app, but decided instead to buy them out.

Facebook itself, of course, had superseded MySpace, the original big social network which, in 2008, had more than 75 million people logging on monthly. Two years later, they had around half that count, and declining. Given this, Facebook knew that it too could lose everything if they weren't paying attention - in order to solidify their market share and build a sustainable business, they needed to move quickly to box out potential competitors.

The Social Network followed the same game plan with Snapchat as they had with Instagram - seeing the rising popularity of the app, especially within the audience segment where Facebook was seeing declines, Facebook CEO Mark Zuckerberg met with Snapchat's founders in late 2012. Reportedly, Zuckerberg told them they had no chance, that Facebook was working on a tool that would duplicate their app and reach more users. Some months later (after that app, called 'Poke', failed), Zuckerberg met with Snapchat's founders again and offered them $3 billion to buy them out. They refused.

Given the history, it's easy to see why we're seeing the copycat tools and apps we are now - if Instagram hadn't accepted, it would have been much the same with their functions. Same with WhatsApp. In order to keep a hold of their market and maintain their position, Facebook, in their view, has somewhat been forced to replicate Snapchat's ideas. Because they work. Because they are resonating.

Yes, Facebook is copying from Snapchat - something they're not trying to hide - but what's the alternative? Let Snapchat eat into their market share and accept a slow dwindling of their audience?

Would you accept another company coming into your market and just taking away your business?

Not if you could fight it - and Facebook, with more users and more resources than virtually any company in the world, absolutely can fight.

So why wouldn't they?

Really, the basic logic of Facebook's Snapchat cloning comes down to numbers.

Snap Inc recently reported that around 25% of Snapchat's 158 million users post to their 'Story' every day. That's a strong indicator of the popularity of the option - if you were to see a similar usage rate for the same function on, say, Instagram, which has 600 million users, what would you have? 150 million people engaging more with Instagram, spending more time in the app.

More than just an estimate, that's the exact number - Instagram reported in January that there are now 150 million people using Instagram Stories every day. Given this alone, the business case for Facebook's Snapchat duplicates makes perfect sense. Yes, a lot of people are going to criticize something like Messenger Day, and Facebook in general, for ripping off Snapchat yet again. But if just 25% of Messenger's billion plus audience end up using it daily, that's a heap more engagement for the app.

The risk, of course, is that such additions could also turn users off, and no doubt that's another measure that Facebook's monitoring - but that's also why they released Messenger Day in Poland and Australia back in October, giving them a good five months worth of usage data before a bigger push. If there was significant user resistance, it wouldn't have got a wider release.

You can apply this logic to all of Facebook's Snapchat duplicates - with these new tools, Facebook's basically defending their turf, and they're seeing significant engagement benefits in doing so, regardless of perceived negative sentiment.

Don't like Facebook copying? It's not about you, it's about the 25% of users who'll use it anyway, and who'll be subsequently less likely to go over to Snapchat as a result.

So yes, Facebook is copying Snapchat. No, it's not original or innovative. But it works - or it works well enough to justify them doing it.

The next time we see it will likely be when Facebook adds Stories into Facebook proper, which they're currently trialing in Ireland. 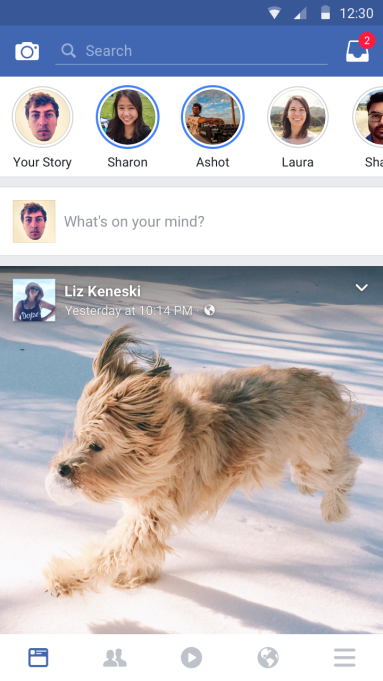 Maybe the user feedback will mean it never gets a wider release. But maybe it will - and if it does, there'll be critiques and hot takes and mocking of Facebook's product development process again.

But the engagement figures are all that really matters.