Facebook certainly seems determined to take the wind out of Snapchat's sails.

Last week, Snapchat's parent company Snap Inc. had a major success, launching their long-awaited IPO to huge market demand, which saw the value of the company (and its founders) rise significantly. Facebook sat back and let Evan Spiegel and co have their moment in the sun, while quietly plotting their next move to slap down the yellow ghost and underline that nothing they have is unique. That Facebook can do all of it, and at much greater scale.

This week, Facebook has launched their latest effort to undermine Snapchat, releasing Geostickers for Instagram Stories which enable users in specific regions - starting with New York City and Jakarta - to attach location-triggered images to their Sna-I mean, Stories posts.

As you can see, the available stickers are location-themed - as explained by Instagram:

"No matter where you are in New York City or Jakarta, you'll see a custom sticker for that city. You may see other stickers appear when you're visiting select neighborhoods and landmarks - each one is designed to match the vibe of the location it represents."

You can add as many Geostickers as you like, adjust their size and placement, and combine them with Instagram's other creative tools. If you've ever used a Snapchat Geofilter, you know how it works.

In addition, when people are viewing your story, they can tap any Geosticker to see the relevant location page and other posts from that city - though worth noting that your story won't show up on the location page itself.

Instagram first tried out location-based stickers back in December, though the actual location was a manual addition, there was no region-specific customization in the stickers themselves. 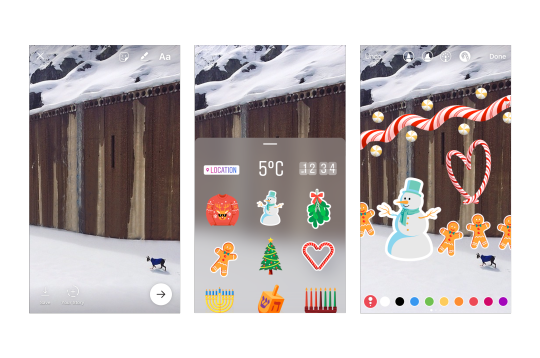 These new tools are much more like Snapchat's Geofilters, with customized artworks triggered by your location.

And given the popularity of Geofilters, Instagram's copycat option makes sense - Snap Inc. noted in their recent S-1 filing that:

"On average, more than a billion Snaps with Geofilters are viewed on our application every day."

And that, of course, is how Facebook will explain it. Yes, this is a direct copy, but Snapchat has merely proven the use case for the tool, they've shown this is what people want, as they did with Stories and Lenses, and as they'll probably do again in future. And as soon as they do, Facebook will copy it. Which is a big concern for Snap Inc.

Essentially, this is using Snapchat as product development for Facebook - and it's funny to watch, you can't help but laugh at the brazen cloning of Snapchat's key functions. But at the same time, each one of those copies hurts the growth of Snapchat a little more, particularly given Facebook's strategy of releasing Snapchat-like tools in regions where Snapchat itself has not yet gained a foothold.

If Facebook offers a 'just as good' alternative, and an opportunity to reach more users, it's quite possible that Snapchat never will get any traction in those markets - and as we've seen with Twitter, the market does not respond well to slowing user growth.

But the numbers show that Snapchat is already losing momentum, likely because of Instagram Stories, with the app's growth decelerating from 17% between Q1 and Q2 2016 to 3% between Q3 and Q4 - the period immediately after Stories was released. But even with that as evidence, the market still seems confident in Spiegel and Co, they still invested a heap into its future growth prospects.

Whether this becomes an issue or not is impossible to say at this stage. But you can't say the warning signs weren't present.

How Snapchat gets out of Facebook's path will be key here. Back in 2012, when Facebook CEO Mark Zuckerberg first met with Snapchat's Evan Spiegel, Zuckerberg asked Spiegel about his plans for the app, while also outlining his own vision for a Snapchat competitor, to be called Poke. Zuckerberg noted that Poke would be released within days. Underlining this challenge, Zuckerberg also changed the large sign outside Facebook's Silicon Valley campus from its thumbs-up "Like" symbol to the Poke icon.

As noted by Spiegel:

"It was basically like, 'We're going to crush you.'"

This was before Facebook offered $3 billion to buy Snapchat (which came some months later), but from then on, the challenge was set. Essentially, Facebook's pitch was like Darth Vader's approach to Luke Skywalker - "join us or die". And while Facebook's initial efforts to challenge Snapchat, like Poke, failed, Instagram Stories has not - and it's only one of the ways that Facebook is coming at Snapchat.

While Snap Inc. is in a good position right now, flush with cash from their IPO, Instagram's Geostickers is another reminder that the app's challenges are great.

Each step in how they respond will be key to the app's future potential.