Back in May, Snapchat was valued at $20 billion, a huge amount that many questioned considering the platform hadn't yet returned any profit. Now, a new report from eMarketer suggests that valuation may not be far off the mark, projecting that Snapchat will make $366.7 million in 2016, jumping to $935.5 million in 2017, then hitting a massive $1.7 billion by 2018.

So how will Snapchat do it? eMarketer's analysis estimate that Stories will overtake Discover as the platform's dominant ad revenue source, with Snapchat also boosting its revenue potential from overseas markets: 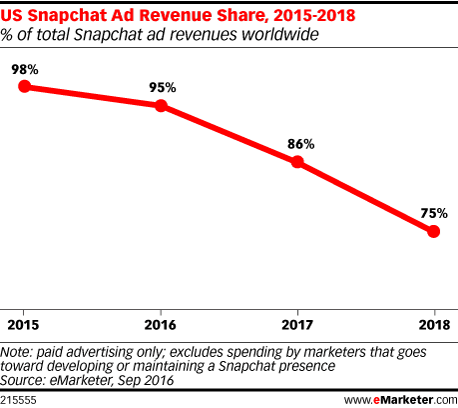 The projections largely align with a leaked presentation deck Snapchat had been showing potential partners late last year, in which they estimated they'd be generating $1 billion in revenue by 2017. The platform's currently building out its ad platform, and is looking to ad new tools like behavioral targeting and (reportedly) image recognition fuelled ads to expand their available options for ad dollars.

Behavioral targeting tools, in particular, will be a welcome addition - currently, the only targeting options available for Snapchat advertisers are:

According to a report from Business Insider, Snapchat's coming behavioral targeting tools will also enable advertisers to reach Snapchat's massive Millennial audience based on their noted interests.

"What that means is if users were heavy consumers of basketball content, for example - perhaps following an NBA Snapchat account or consuming lots of content on the ESPN Discover channel - advertisers could target them around categories such as "sports" or "basketball."

For additional context as to where Snapchat makes money, the platform's current revenue split, according to eMarketer, includes 43% coming from Discover and 20% coming specifically from sponsored Lenses.

The bigger question right now, however, is what sort of impact Instagram's "Stories" will have on Snapchat's growth projections. Early data has shown that Snapchat use hasn't suffered as a result of Instagram's new, copycat option, but at the same time, Instagram says 100 million people are already using Stories every day. Even if Snapchat use isn't declining as a result, it's pretty safe to assume that at least some of the people that may have become Snapchat users are now more likely to stay on the platform they know - in this sense, Stories is likely less about stealing Snapchat's audience and more it's about slowing its expansion.

On this front, it's largely about what comes next - Snapchat's reportedly been working on their augmented reality glasses for some time, and high-profile tech investor Jason Calacanis made an interesting note recently about what he thinks Snapchat will do with this technology.

Advancing this, Snapchat recently joined the Bluetooth Special Interest Group (SIG), the industry association that maintains the Bluetooth wireless standard - of which membership is a necessary prerequisite for companies that want to employ Bluetooth in any hardware devices.

The signs suggest that Snapchat will be making a move on this front soon - and really, above and beyond projections and figures, that's what most are waiting to see. Instagram has openly challenged Snapchat on their own turf, how Snapchat responds will be a major point of interest for market analysts and users alike.

And at the same time, what Instagram does next with Stories is also equally significant - in the battle to win audience attention, both will be seeking their own ways to stand out. For Snapchat, it's about innovating and developing something new that keeps users coming to to their platform, something they can't get anywhere else. For Instagram, it's about showing users why they should forget Snapchat and stay with them instead - likely through improving upon Snapchat's ideas, as opposed to developing whole new use cases.

But either way, the main point of emphasis, from eMarketer's report is clear - you ignore Snapchat at your own risk.

The platform is still on track for massive growth and expansion, there's a heap of potential in their new offerings, both in terms of ad options and on-platform tools.

The next move will be big, but the battle for audience domination will be won over time.