Will Social Media Become the New TV for Brands?

Traditional TV viewership is declining and streaming services are picking up the slack. More specifically, time spent watching traditional TV dropped by 11% from 2010 to 2016, while weekly streaming hours have more than tripled in the last two years. 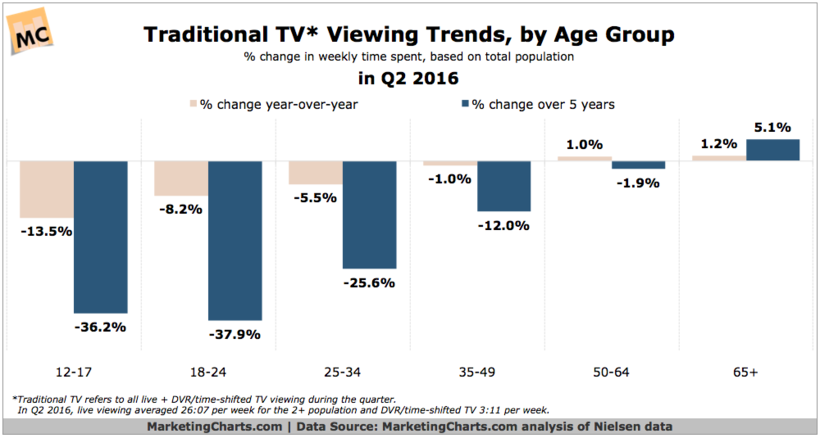 In the United States, this trend is taking place along generational lines with TV ratings dropping by 40% among teenagers and younger twentysomethings. Additionally, a survey from Deloitte found 19-25-year-olds estimated that they spend 39% of their TV content time watching streaming video as opposed to 29% watching live programming and among 26-32-year olds, streaming (31%) was also ahead of live viewing (28%). A Defy Media study similarly suggested that 13-24-year-olds are spending more time with free and subscription-based digital video than with TV.

The beginning of 2016 also marked the first time that streaming video services were in 50% of US TV households, whereas DVR penetration has remained flat over (49-50%) the past 6 quarters. 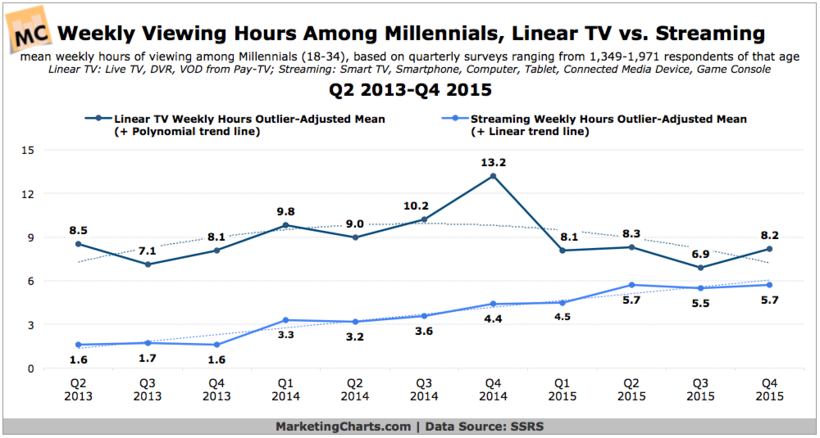 Social media channels have been quick to jump on these trends by expanding to offer streaming services - with the likes of Facebook Live, YouTube Live, live-stream programming on Twitter, and Periscope having launched within the last two years.

And we saw the effects of this play out in the recent presidential debates - the second debate had 63 million TV viewers whereas 124 million viewers watched debate content (including all videos related to the debate) on YouTube, 3.2 million tuned into Twitter's livestream, and Facebook's Live broadcast partnership with ABC News garnered over 7 million views (WIRED).

It's also worth noting that Facebook alone has 191.3 million users in the United States, while there are 118.4 million households with TV sets (to be fair, this last set of numbers is not an apples to apples comparison, but it does indicate the growing ubiquity and household penetration of Facebook).

For brands, the sheer numbers on streaming service usage and access to these through social media are among a variety of reasons why social media could become a true challenger to television to reach and engage audiences.

It's not surprising that, with these numbers and a desire to capture seemingly elusive Millennial and Generation Z cohorts, sports brands are among some of the first to jump on social streaming.

The NBA was one of the first leagues to sign a contract with Twitter to stream two platform-specific shows and have gone as far to announce plans to produce one game a week in VR. The US Open, the NFL, and Wimbeldon have also all begun to live-stream events.

Additionally, MLB and the NHL have contracts with Twitter for live-streaming games, while MLS produces weekly shows on Facebook Live and Bleacher Report recently signed a contract to stream high-profile high school football games on the channel, as well.

In addition to this, Facebook and Twitter have also announced features that allow users and non-users to stream video direct to their TV sets - literally taking over your TV screens. 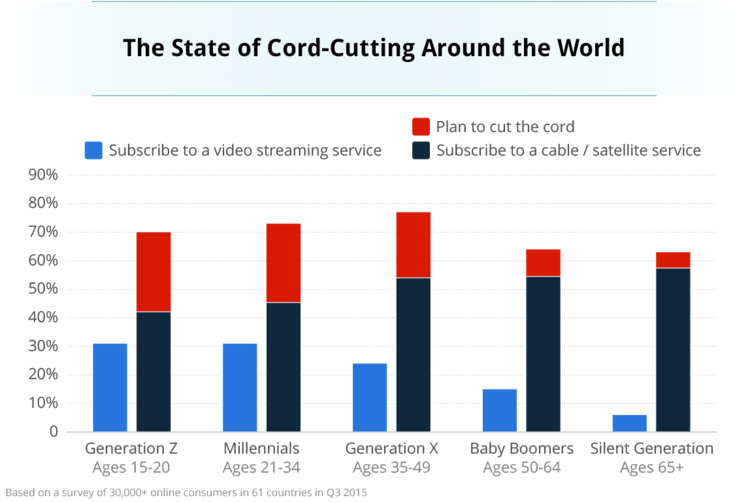 The downward trend of traditional TV viewership can't be attributed to just one source, but one of the main causes is cord-cutting. Cord-cutting is the practice of forgoing cable or satellite television for alternatives like Netflix, Amazon Prime, Hulu, or others.

With the declining rates of traditional TV services and increasing platform fragmentation, alternative channels - like social media - can offer solutions to address the pain points that cord-cutters experience, such as the desire for more relevant, on-demand, and cheaper entertainment.

New distribution methods have also created new audiences and demands for streaming content that exists completely outside the realm of traditional broadcast.

One example is Twitch.tv, a video game watching service, that reaches over 10 million global unique visitors per month with average users watching 104 minutes a day.

For brands, streaming on social media allows for push notifications of broadcasts and built in call-to-actions to attract and potentially convert viewers.

Also, a brand can communicate directly with its audiences on social (and target new ones), instead of having to work through television schedules and the broader set of audience demographics for television programming.

For instance, with the dwindling consumption of newspapers, imagine a publisher like the New York Times leveraging its brand reputation and affinity to offer daily news segments or shows directly to its followers on social.

In such a move, the paper could conceivably cultivate a community, larger audience, include calls-to-action for digital subscriptions, and even run advertisements for revenue generation (more on that later). 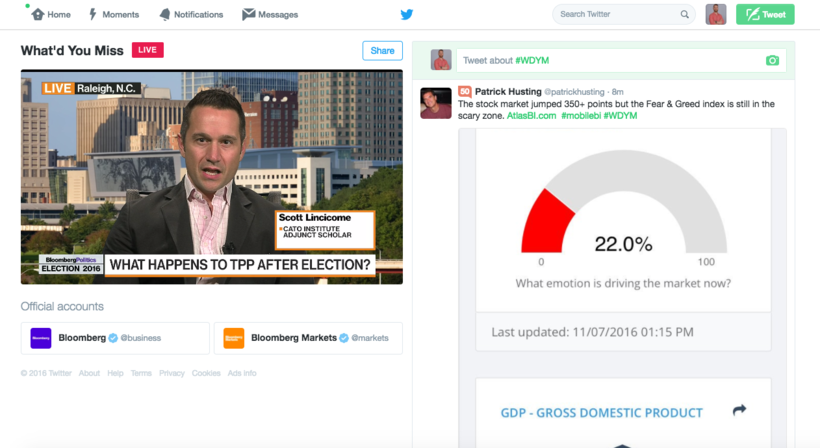 Viewers can also benefit - through streaming, they can have direct access to a brand, speaker, or community around a show or event. Whether a stream is a studio-quality production or made with an iPhone, there is unparalleled access to the subject and a community building mechanism in place to enhance the experience.

Furthermore, live video gives brands the opportunity to share behind the scenes or exclusive coverage that is not available anywhere else and exactly matches their audiences' interests. As a result, this coverage can bring audiences closer to the brand, create new experiences, and establish stronger connections.

Midway through 2015, nearly 50% of videos viewed on social media were experienced via mobile device - up 74% from 2014 and up 844% since 2012. Cisco estimates that by 2020, 75% of the world's mobile traffic will be video. Granted these stats are for all video, but it still shows the gaining popularity of mobile viewership. 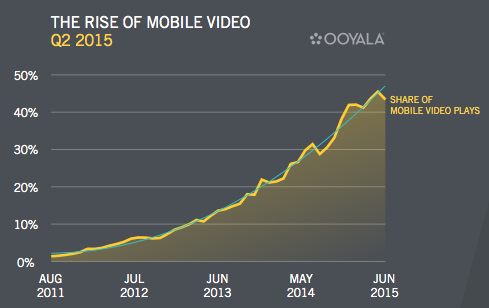 Social media provides audiences with access to streaming - or streamed - content anywhere and at anytime, and most importantly, without a cost. Yes, TV services like ESPN Live and HBO Go exist, but they are only accessible through paid cable subscriptions, presenting a huge opportunity for brands.

It also appears that audiences favor video and streaming content as well. Video consumption on Twitter has grown 220% over the past year, 100 million hours of video are consumed on Facebook daily, and weekly streaming hours more than tripled between Q4 2013 and Q4 2015. 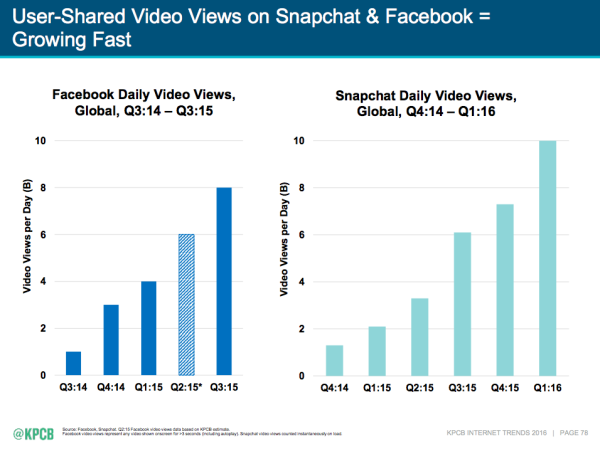 YouTube stars already know the power of revenue generation on the platform. Through streaming on social, the production, audience, and scheduling are in the power of brands. With this level of control, brands can become their own de facto "channels" with revenue generating models.

Whether these models take the form of affiliate marketing, traditional advertisements, product placement, product mentions, or something else will be up to each occasion. However, the opportunity is real for brands to begin to use live-streaming not only as a mechanism for audience growth and relationship management, but also a profit generator.

The digital age has ushered in a time of massive data acquisition. Time will tell how the promise and potential of all of this data will play out, but in its current state, digital data enables brands to measure the performance of content, understand how content is being received, and track success in order to continually refine offerings at a pace and to an extent not available through traditional TV.

With social data, brands can additionally test concepts, understand where viewership drops off, and understand what connects with audiences, among other things.

Also, the abundance of data allows for the development of niche and hyper-targeted content to ensure it's effective and relevant. This level of targeting can also be a boon for potential advertisers that want to be in front of qualified or highly specific audiences.

Of course, all of this can change as social networks continue to evolve, and there's a long way to go. But for now, and for brands, social media looks primed to not only dominate the Internet, but also to potentially challenge television as we know it.

A version of this post originally appeared on the Simply Measured blog.