Deep Learning - The End of SEO as We Know It

The latest news about Google's head of search, Amit Singhal, to leave the company he spent 15 years with, had the shocking effect on the SEO community. And what is more surprising - his successor, John Giannandrea, is the one who has worked on artificial intelligence at Google (including RankBrain - the part of search algorithm which uses AI to work with a queries search engine was not able to understand before). With this change of executives, we may be on the verge of a new era - the era of transition from the algorithm-based search to AI-based search.

To power its artificial intelligence, Google uses deep learning (also known as neural networks) - one of machine learning methods, which uses a mathematical model to mimic the way as human brain neurons work.

What is Deep Learning

Deep learning is built on the concept of digital neurons, organized into layers. Each layer extracts higher level features from the input data it receives and passes these features to the next layer - so, as the result, higher layers are able to understand the concepts behind the input data.

For example, if we are going to analyze images with deep learning, the first layer will be fed with single pixels and this first layer can be "trained" to recognize shapes from these pixels. Then higher layers may combine these shapes to "understand" what are the objects displayed in this picture.

If we just provide a few thousand of images with human faces to this neural network, saying "this is a face" - this is how we "train" its digital neurons to recognize a concept of "face" - so in the end, it will be able to recognize faces in any picture. 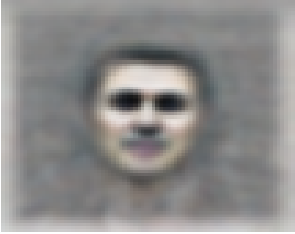 The face concept, learned by the best neuron of the neural network.

But modern neural networks don't have to be trained by humans. The so-called "unsupervised learning" allows detecting the concepts behind input data without any labeling. In 2012, Google engineers released a paper "Building High-level Features Using Large Scale Unsupervised Learning", where they used a 9-layered neural network consisting of 1 billion connections, to recognize faces from 10 millions of 200x200 pixel images. As the result, their network obtained 15.8% accuracy in recognizing 22,000 object categories (faces, cat faces, human bodies etc.) And nobody told the machine what's on the pictures!

How Deep Learning Was Implemented in Google

In 2007, professor Geoffrey Hinton, one of the pioneers of neural network systems, gave a Google TechTalk about Deep Learning. This started all the buzz around neural nets, and soon Google (as well as IBM or Microsoft) began to hire the experts in this field.

In 2011, Google's computer science superstar Jeff Dean and AI professor Andrew Ng started a project to build a huge neural network. After the first results were delivered in 2012, the project changed its unofficial name "Google Brain" to "Deep Learning Project." They were working on speech recognition, images recognition (for example, to provide automatic captions), ads, street view, self-driving cars and other tasks. Results of their work were successfully incorporated into Google's products.

In 2013, Google acquired DeepMind, an AI company based in London. For DeepMind's CEO, Demis Hassabis, the ultimate goal is to create a universal AI machine that will process any information from anywhere, and then it will know what to do next - just like a human brain does.

This clearly indicates the vector of Google's movement. Amit Singhal was against using machine learning inside Google Search because it is not clear how neural net ranks the results and thus more difficult to tweak its behavior.

This resistance cost him a career.

How Deep Learning Will Change SEO

Threat #1: No control over search algorithm

Amit Singhal was correct - with neural networks using unsupervised learning, it is very hard to define which factors the machine uses to rank websites in search, and how these factors are related to each other. The factors which are considered less efficient for now (as, for example, working under HTTPS or having valid W3C markup) can obtain higher importance for an AI-based ranking algorithm - because the machine uses a different approach when it creates its own concepts from input data. Moreover, the AI may even start using factors which Google doesn't use to rank websites. And neither engineers nor users won't know that.

Threat #2: Potential errors due to the nature of deep learning method

Do you remember how Google translate, which is also based on machine learning, converted "Russian Federation" to "Mordor" in its Ukrainian-to-Russian version? Other errors included "Russians" translated as "occupiers" and the name of the Russian minister Sergey Lavrov translated as "sad little horse."

This happened due to how neural net works with data. And while this particular error has been noticed and fixed, imagine how many errors will go unnoticed (and unfixed).

With AI technology already used to deliver Google ads, it is clear that search results will be personalized more heavily over time. Thus, each visitor will have the search results based on his/her previous search queries, age, gender, income and all other information collected by Google. So rankings will be based on user's persona, and not on how the search results are relevant to the particular query.

In this post-algorithmic world, it will be impossible to build links or optimize pages in order to manipulate search results. Even "SEO-friendly" term may disappear. Instead, the only thing to focus will be "user-friendly."

And this will be the end of SEO as we know it.