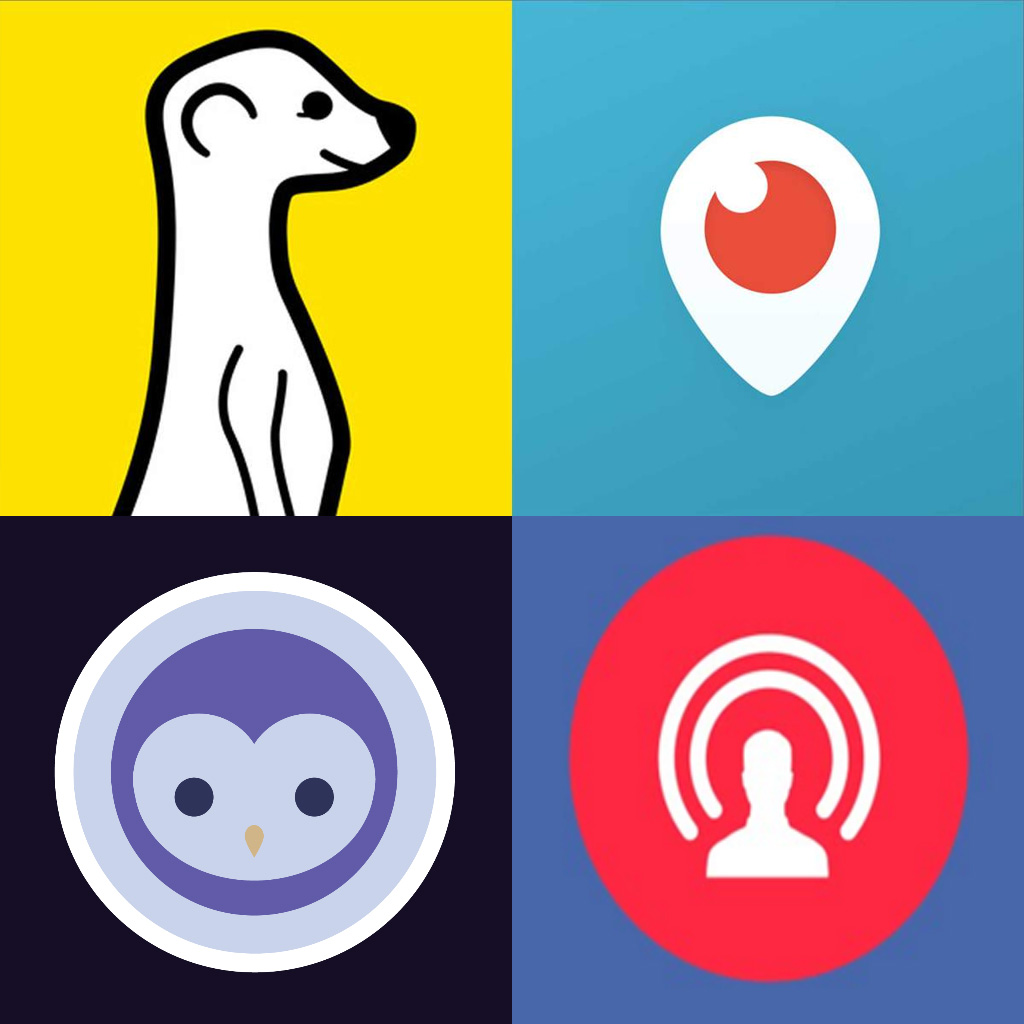 I'm not 100% sold on live-streaming. Actually, that's not true, I definitely see signifcant value and potential in live-streaming, and can envision a great many use cases and benefits, but I'm not sure we're close to realizing the full value of streaming content as yet - and I don't know that the current crop of tools and apps are the ones that are going to take the functionality to the next level.

Early in 2015 Meerkat arrived. Hitting right in the midst of SXSW, and sparking a wave of attention and coverage, Meerkat was the next big thing, the next big step in the evolution of social connectivity. Of course, live-streaming had existed well before the arrival of the bright yellow suricate - there's any number of video chat and Google Hangout-like tools that allow you to talk to people live, across the web - but Meerkat was different because it made it so easy. Using modern mobile networking capacity and social media connectivity, Meerkat enables anyone to share their life and experiences in real-time - within a couple of clicks, you're broadcasting to the world. Such capacity is truly amazing - through sharing our experiences in this manner, via the unique perspectives of each user, we're brought closer to seeing things through the eyes of someone else, to experiencing a whole different perspective on the world. In this, we're better connected to incidents and events - as succinctly noted in this tweet by ProBlogger Darren Rowse:

Watching a riot of sorts on Periscope in London. This is where Periscope comes into its own. https://t.co/1ARqg3Grse

In this capacity, we're allowed access to another world through live-streaming, and that's something full of great potential, possibilities we've no where near realized at this stage. But at the same time, live-streaming, in its current form, has some very clear limitations, restrictions that might just constrain it from taking the next step, at least at this point in its life cycle.

Here's the thing - live-streaming is almost by design a very niche offering. Or maybe not 'by design', but by capacity - live-streaming in its current form really isn't built to scale as the level needed to become a bigger and more relevant platform.

For example, Periscope streams are put on delay for certain users once a stream hits more than 1,000 viewers, and comments are cut off to new viewers after the first 100 come onto the stream. Now, that delay isn't major (nine seconds max) and the comments are pretty much impossible to follow in real-time after about 60 users or so come on board anyway, but these limitations are not in place for presentation reasons, they're in place because the system can't handle too many people on a stream at any one time. Newer live-streaming app Blab, which allows people to broadcast four-at-a-time, can also only deal with a certain amount of viewers before struggling with load and having difficulties. And while we are talking about a lot of viewers here - 1,000+ viewers on a live-stream is a pretty huge amount by any measure - in the wider scheme of things, 1,000 people is nothing. For context, the highest rated TV show in the US last night had over 20.6 million viewers - now, that comparison may by unfair, streaming isn't trying to be the new TV, as such. But in reality, in order to be seen as a significant and impactful broadcast option, streaming does, in some ways, need to be a TV alternative.

And they know this. Periscope, for example, has just released its new app for Apple TV which will, in effect, make Periscope another TV channel.

Now, as you flick through channels from your couch, you'll also be able to load up Periscope and scan through the streams to see if there's anything interesting to watch. Adding this capacity has the potential to greatly expand the reach of live-streaming (if Periscope's system can cope with such demand), but in order to fully maximize this, the next question becomes how do you make live-stream content a viable entertainment alternative for a big enough audience to truly matter, to justify significant interest, and thus investment, from big brands and marketers?

Really, in order for live-streaming to go to the next level and reach a wider audience, the option needs to either:

In regards to the first point - at present, the broadcaster vs. viewer ratio is fairly wide and highlights that focusing on getting more users the platforms through the entertainment factor of creating your own content could be a challenge.

For example, currently, according to Periscope's user numbers, there are around 2 million users on the platform every day.

But then if you overlay that number against the total Periscope audience - 2 million per day - you find that only 3.78% of Periscope's audience is sending out links - only 3.78% of Periscope's daily user base is actually creating content. Even if you were to take that as a guide and assume there are some Periscope streams being created that are not being tweeted out, double that figure and that's still well fewer than 10% of Periscope's user base actively creating content. You can see too that the comparative links sent to Meerkat and Blab content are also very low (for additional context, YouTube generated 91.9 million links within the same period, while Vine had 41.9m).

What these figures show is that the vast majority of people are more comfortable watching a live-stream than creating one them self - which is no surprise, but it means that live-streamng is not likely going to catch on as an entertainment tool through the facility of providing users the ability to create their own streams. So the alternative to expand growth of the medium then is for live-streaming to be entertaining and build audience by drawing people in with content of mass-appeal.

And this is where Facebook may just be in the box seat. Facebook recently released their own live-streaming option, 'Live', but they've restricted access to the option to people with verified profiles - so, essentially, celebrities only. 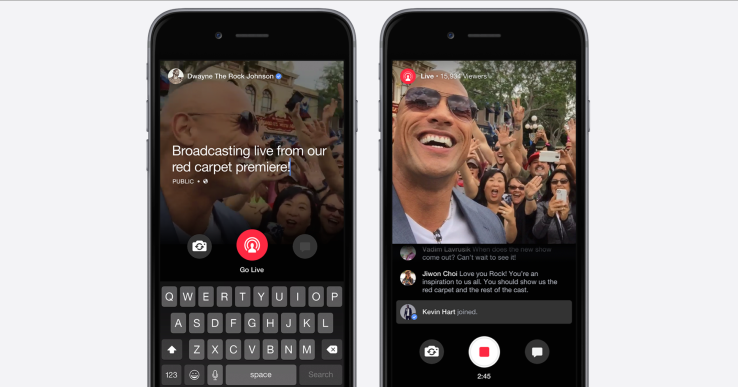 This works on two fronts - one, it gives celebrities some level of exclusivity and importance, which will likely increase their interest in using it, but more importantly, it means that the live-streaming content uploaded to Facebook is far more likely to be entertaining and to appeal to a wider audience, a fact that's clearly highlighted in the viewer numbers being seen on Facebook Live streams - a random sample of Live videos highlighted on the Facebook page 'Live on Facebook' reflects an average of 1.16m viewers per stream, along with thousands of comments.

Out here in Seattle about to start my 5K

Now, that makes sense, right? These are, after all, celebrities, with huge, pre-existing followings - of course they're going to gett a heap of views and comments. But what if Facebook were to break out Live into its own app or tab? What if Facebook decided, after seeing that a growing number of celebrities were using Live, to create their own, Periscope-style listing with all the active Facebook Live streams in one place, with a constant flow of celebrity content? And what if, then, Facebook opened live-streaming to all users - so while people were looking through the latest celebrity videos, your content could also be featured in amongst that list? That'd be pretty enticing, right? Why would anyone go to Periscope anymore if they could go to Facebook Live and see the latest content from The Rock or Jay Baer (as an industry-specific example)? Why would users broadcast on Periscope anymore if they could massively expand their reach potential by placing their content in amongst celebrity creators? Facebook will have the reach numbers, the content, and the capacity - a wider rollout of Facebook Live could change the live-streaming game very quickly.

And this is why I'm not sure any of the current live-streaming offerings are going to be the ones that take the functionality to the next level. As streaming rises in popularity, other, bigger players, like Facebook, are watching. They have more money, larger networks and more capacity to do it better, and they can use the lessons learned by the current players to refine and improve their offerings before a full roll-out. If not Facebook, YouTube would also be very interested and will be watching the scene very closely.

While the current tools are great and functional, I suspect the platform that takes live-streaming to the next level will be another evolution away, built on the back of the initial lessons learned. Of course, that doesn't mean you should turn your back on streaming and wait for the next iteration to arrive before paying attention, any practice or process you can put in place now will still be applicable as the tech develops. But it does mean you shouldn't get too attached to any one platform or provider at this stage. The game will change, and it could evolve quicker than you expect.