Every week, every day, Facebook is trying out something new. Some of those experiments take off – like Reactions – while others fall flat – like Facebook Stories (though I wouldn’t be counting it out just yet). And while new tools and options are great, with so many different updates floating around, they can also be difficult to keep track of.

To help with this, we’re compiling a weekly list of Facebook tests and updates seen ‘in the wild’. This week, we have an update for Facebook Workplace, facial recognition for account security and a new ‘shows’ listing for Pages.

TechCrunch has reported that Facebook’s rolling out an updated desktop version of their professional platform Workplace, which also includes a new screen-sharing option to help improve collaboration. 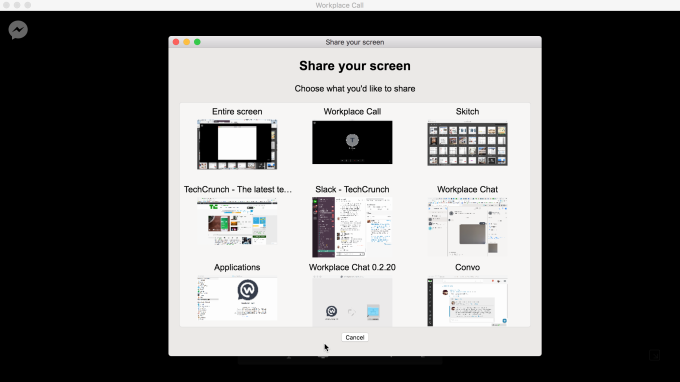 The addition of screen-sharing could make Workplace a more significant rival for Skype and Slack – while many have expressed privacy concerns about Workplace, and about adding what’s essentially Facebook into the professional environment, the platform’s now being used by more than 14,000 companies, each of whom are paying between $1 and $3 per user. That makes it a significant opportunity for Facebook – and as such, it’s no surprise to see them working to upgrade it and improve market share.

And a key note highlighted by TechCrunch - the screen-share option also enables users to either share their whole screen or only the app they’re running. Given the aforementioned privacy concerns, this is an important detail.

The new version of Workplace is currently in beta and will be rolled out soon. 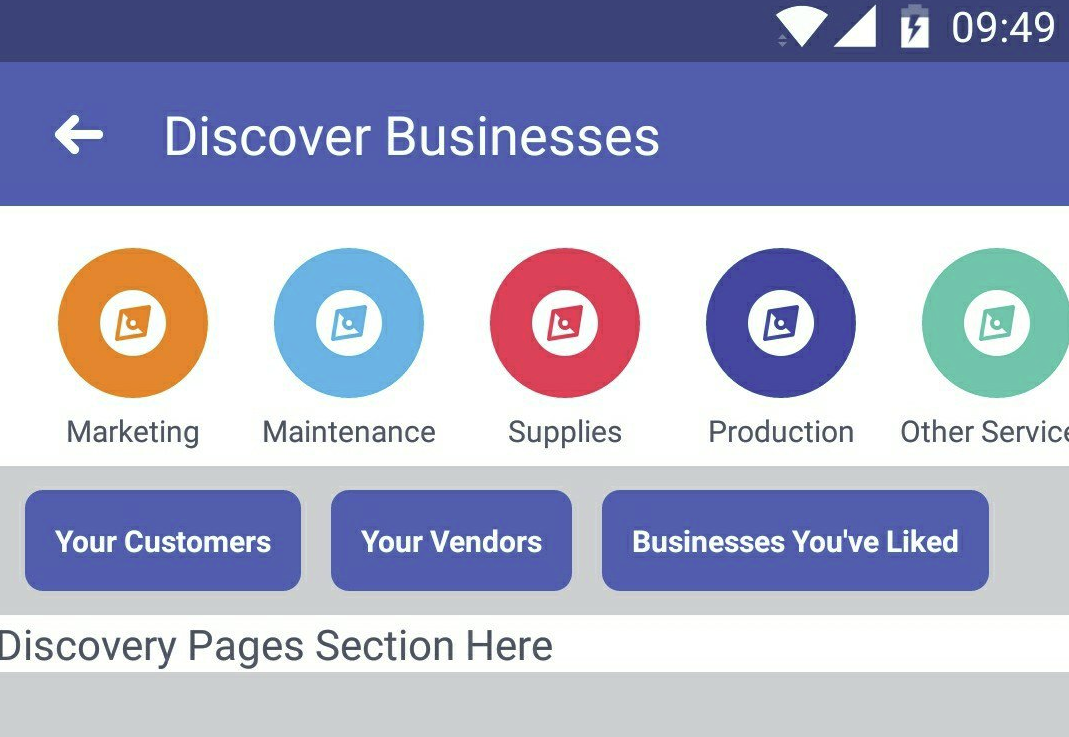 It’s an interesting addition – B2B is generally considered LinkedIn’s territory, and these new tools could be seen as Facebook once again treading gently on LinkedIn’s turf.

There’s not a lot of detail to go on at this stage, but the option could help Facebook create a B2B eco-system, with recommendations from other businesses and rankings based on performance, helping companies find more reputable partners for their needs.

Interesting too to note the separate listings for ‘Your Customers’, ‘Your Vendors’ and ‘Businesses You’ve Liked’, again utilizing Facebook’s network graph to add a more personalized touch to any such recommendations.

Hey, remember how Apple recently announced that their iPhone X will utilize facial recognition to unlock your phone, as opposed to the fingerprint sensor?

Seems like Facebook’s also looking to get in on the act.

Again, there’s not a lot of detail at this stage, but it seems that Facebook’s also considering how it can use facial recognition to help improve the security of your account - and given the platform already has advanced image recognition systems capable of picking out specific people in photos, it seems well within their capacity to add this in.

Facebook’s also increasingly keen to get more TV-like content on their platform, and as such, this addition is no big surprise.

Some Page admins have noticed that there’s a new ‘Shows’ section now listed in their available Page segments. 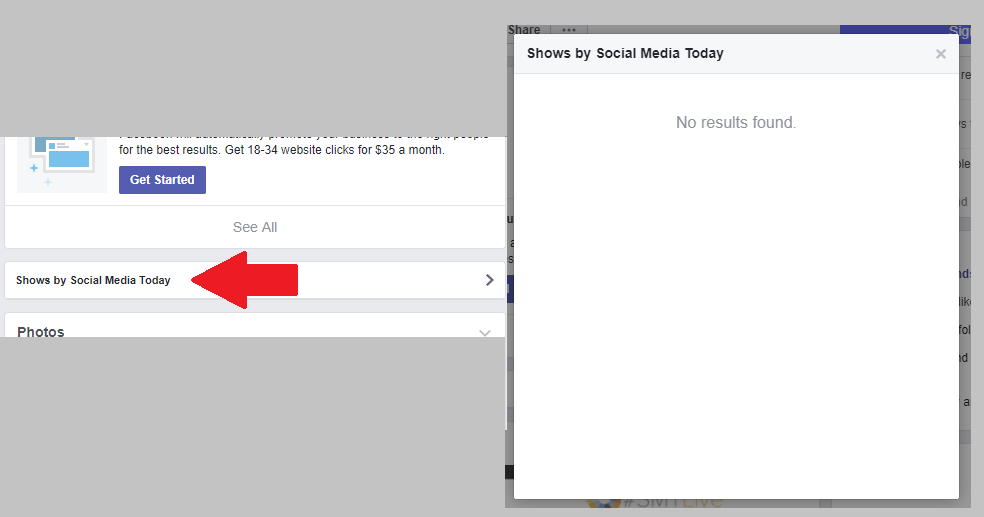 Facebook’s just launched their ‘Watch’ platform, which they’re investing big dollars in, so it makes sense for them to give video ‘shows’ more focus.

Expect Facebook to make a bigger push for Pages to create their own video shows, and to potentially help them increase exposure by giving such content a News Feed boost.

And the last addition spotted this week is a new update for Facebook Mentions – their exclusive app for high-profile users – which enables people who use Facebook Live through the app to moderate comments during the live broadcast. 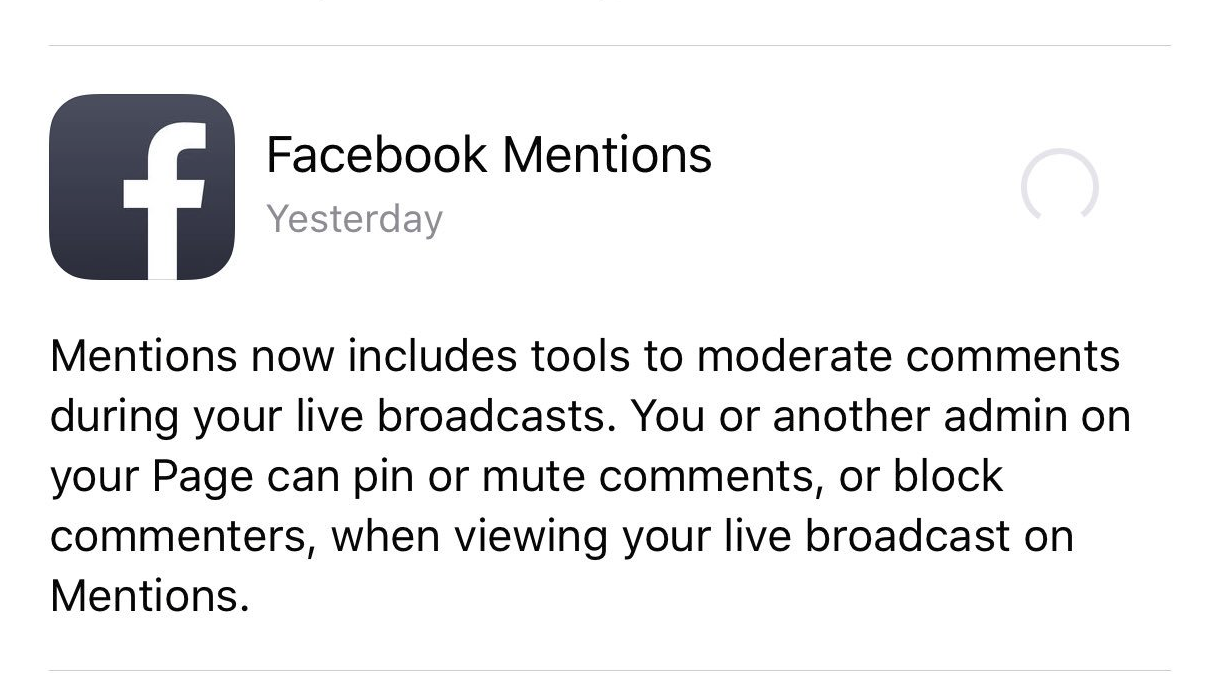 It’s a relatively small, but helpful addition for Facebook Live, which will come in particularly handy for celebrities who can now assign a moderator to keep the comments stream in check, improving the experience for viewers.

Those are the five key updates spotted this week - thanks to @MattNavarra, Devesh Logendran, @JoshConstine and @wongmjane for discovering and highlighting these changes.