Interactive content allows viewers to respond to it in more than just comments or likes. It was as early as 2015 when Ion Interactive published a survey demonstrating that content is taking more interactive forms. Have you taken a Buzzfeed quiz? If you haven’t you’ve been living underneath a rock.

Here’s another interesting fact - The New York Time’s most popular piece of content wasn’t an article; it was a dialect quiz. Observe Hubspot’s Facebook page and you’ll notice that most of their post texts end with a question mark. The smallest of efforts to make your content interactive can make a difference.

Ideally, this is what your internal content marketing team should be doing; creating interactive content such as quizzes, polls, contests or Q&As for social media.

If you promote your eBooks across social media channels, you’ll see how the activity increases your lead generation efforts. Through a mix of organic and paid social media promotions, you can get access to new target groups and introduce them into your conversion funnels. To make organic promotion more effective, you could use mind-blowing facts in the introductory text as teasers, just as Publi.sh does in their posts. You could also pin Tweets or partner with influencers like some brands have to ensure that you reach is expanded considerably. 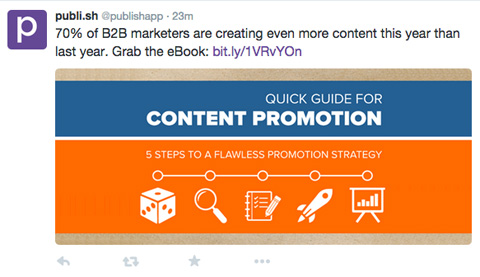 According to research, posts that evoke strong emotions in people are more likely to succeed on social media. Further, it’s not very surprising that it’s positive emotions such as awe, amusement, and laughter that make people want to share. Note, for instance, best selling American Author Jon Acuff’s tweets are hilarious and hugely popular. Brands such as Chipotle, Charmin, Taco Bell, and Old Spice use humor to captivate their Twitter followers. You could even share inspirational content such as quote covers, struggles, and achievements to encourage more people to share. 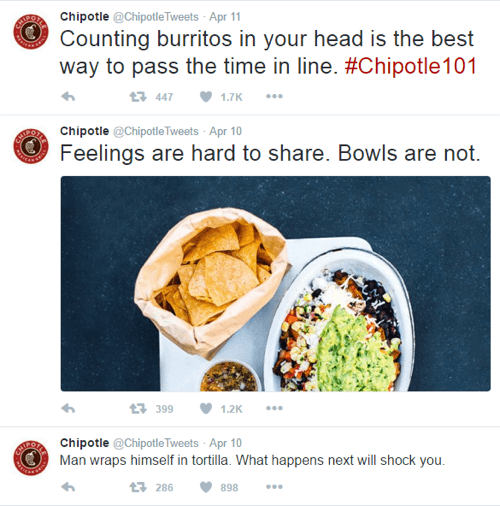 One way to find positive content to share is by subscribing to updates from research organizations so you can share positive findings with your target audience.

According to a study, 70% is the rate of understanding labels with text only. To increase audience comprehension, visuals are necessary. Everyone recommends using visuals, but which ones to use and how? You could use humor on visual posts as Kim Garst does, or memes like Post Planner does. You could also represent complex concepts in an easy to grasp manner using visuals. Large block objects and text with arrows to show associations work very well in crowded environments like on social media.

When creating your social media content, check if you could represent something visually before committing to text.

User-Generated Content is highly valuable in earning impressions and engagement on social media. Especially on platforms such as Instagram, UGC can boost interactions and reach. Caption contests, story contests, review contests are all great examples of UGC. You could even consider gifting social media influencers your merchandise and tagging them with a beautifully captioned post on social media, like jewelry manufacturer Mejuri does. Alternatively, you could curate content - write-ups and art from fans, customers and social media influencers.

When sharing UGC, ensure that you tag relevant people and add the right hashtags to increase exposure for your content.