If you wanted a reminder of who’s now in charge at Twitter, Elon has provided a couple this week.

Yesterday, former Twitter CEO Jack Dorsey posted his first-ever article to newsletter platform Revue, which Twitter purchased last January, in which he outlined his response to the recent ‘Twitter Files’ leaks, through which Elon has been working with selected journalists to uncover past moderation actions taken by Twitter, and how they specifically relate to conservative users.

Dorsey, in carefully worded terms, offered a defense of his former colleagues, amid questions over their activity, while also, once again, pointing to a decentralized model for social platform moderation, which he believes could be a better way forward to limit bias, misinterpretation and harm. 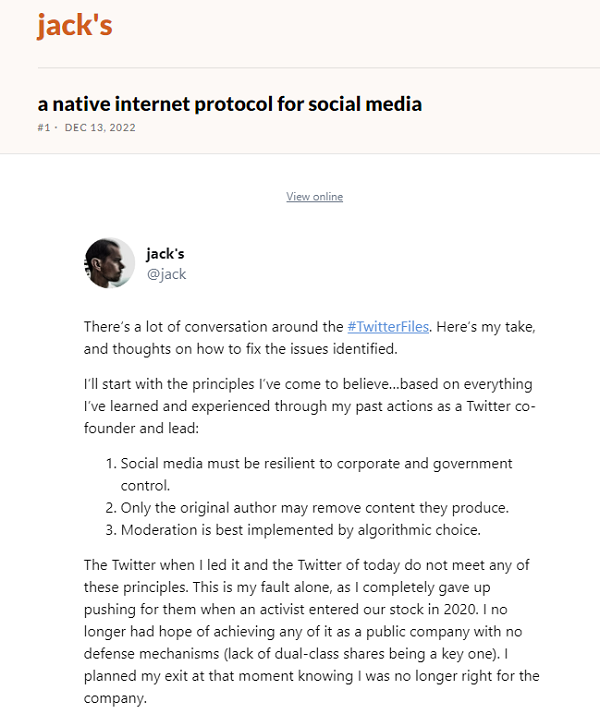 Which won’t work, for a number of reasons. But Dorsey, as always, remains steadfastly optimistic, applying philosophy over substance to seek a new way forward, in hopes of shedding the missteps of times past.

I’m not sure which part upset Elon the most. Maybe this line:

“The current attacks on my former colleagues could be dangerous and doesn’t solve anything.”

Either way, something seems to have got his goat, because today, less than 24 hours after Dorsey posted his article, Twitter has sent an email to all Revue users informing them that the platform is shutting down next month.

“From January 18, 2023, it will no longer be possible to access your Revue account. On that date, Revue will shut down and all data will be deleted. This has been a hard decision because we know Revue has a passionate user base, made up of people like you.”

Again, Twitter only acquired Revue last year, with a view to facilitating new forms of revenue generation for creators, as part of its broader push to build in more monetization tools. But clearly, it is not part of Musk’s ‘Twitter 2.0’ plan - or maybe Elon didn’t know that Twitter-owned Revue till he saw Jack’s post yesterday.

I mean, that has happened with other elements:

The other consideration is that this is just a coincidence, that Twitter was going to shut down Revue anyway and Dorsey just happened to publish a post the day before that announcement.

But then again, today Twitter also shut down a Twitter profile that had been tracking Musk’s private flights, which he swore he wouldn’t do, even using it as an example of his commitment to free speech.

My commitment to free speech extends even to not banning the account following my plane, even though that is a direct personal safety risk

It seems that the definition of ‘free speech’, in Elon’s view, is variable, with reports that Musk has also been pushing staff to prioritize the removal of scam tweets that bear his likeness, along with some suggestions that he had told staff to remove videos of him being booed at a Dave Chapelle show earlier this week (this one seems to be a rumor, as the original video is still up).

Musk himself has also commenced promoting COVID conspiracy theories and sharing transphobic perspectives. Both of which are not illegal, which has been Musk’s stated threshold for what will be acceptable in the app. But a user with over 120 million followers posting COVID conspiracies would definitely have come under scrutiny in times past.

Yet, at the same time, Musk has ruled out reinstating the account of banned broadcaster Alex Jones due to his personal perspective on child safety.

In essence, what we’re seeing in ‘Twitter 2.0’ is that the platform is now being held to Elon Musk’s rules for ‘free speech’, and all that this entails. Which is seemingly more flexible than the same under previous Twitter management, but is much more aligned with his personal perspective than it is the law or other established parameters.

Again, if you wanted a reminder of who’s in charge, Elon has made it clear, which could point to the future direction of the app – and interestingly, is exactly what Dorsey warns against in his essay.

Revue says that users will be able to download their subscriber list, past newsletter issues, and analytics by following these instructions.