Amid renewed calls to ban the app, after India blocked all Chinese-originated apps due to concerns around their potential data-sharing obligations with the Chinese Government, TikTok has this week published its latest transparency report, which provides specific detail on all of the requests that the app has received from law enforcement and government bodies relating to content removals or data.

TikTok is also now including detail on content removals due to violations of the platform's Community Guidelines and/or Terms of Service within its reports, as it seeks to demonstrate full transparency in its processes. But there are still some questions there - here's a look at the latest data, which covers the last six months of 2019 (July 1st to December 30th).

First off, TikTok says that it removed 49,247,689 videos in the period for violating its Community Guidelines or Terms of Service, with the vast majority of those originating from India. 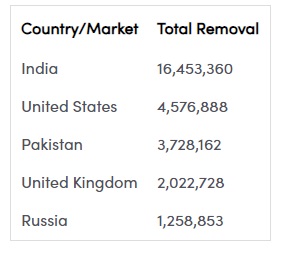 That makes sense - TikTok's largest user base, outside of China, is (or was) in India, with reports suggesting the app had somewhere around 200 million users in the region, before it was banned last week.

TikTok has also been forced to make some significant, large scale content removals in India in order to appease local regulators. In April last year, TikTok removed more than six million videos that violated its community guidelines after the Madras High Court called for a ban on the app due to concerns over “pornographic and inappropriate content”.

Given this, it's little surprise to see more content being removed in India - while TikTok also notes that the vast majority of these removals came as a result of its internal detection systems, not user reports:

"Our systems proactively caught and removed 98.2% of those videos before a user reported them. And of the total videos removed, 89.4% were taken down before they received any views."

That seems like a good result, but still, there are some worrying trends around the exploitation of young women, in particular, within the app, even with more strict regulations in place.

But the more interesting - and likely more scrutinized - element of TikTok's transparency report will be the section looking at Government requests for removals of content due to violation of local laws and restrictions.

Among various concerns around how the Chinese Government may be able to interfere with TikTok's operations, one specific element of note has been that the Chinese regime could be using TikTok to share propaganda, with Australia's Strategic Policy Institute even going so far as to label the app "a vector for censorship and surveillance". In order to do that, TikTok would theoretically see various requests from the Chinese Government to remove specific content, which would also, theoretically, be listed in this report.

So, how many requests for content removals has TikTok seen from Chinese officials? 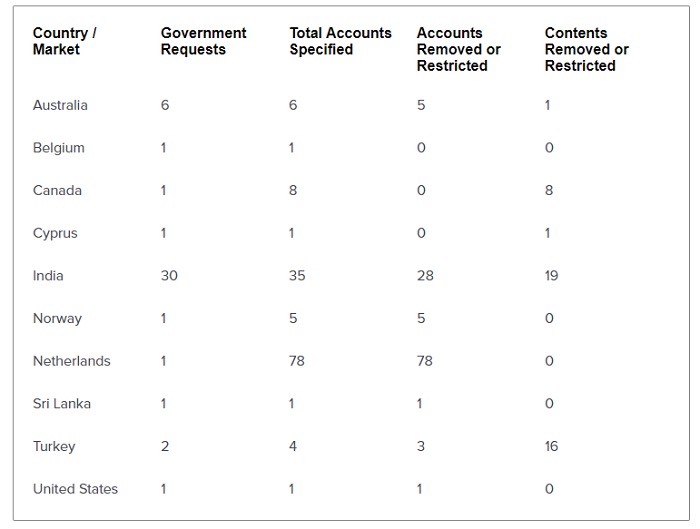 "TikTok did not receive any government requests to remove or restrict content from countries/markets other than those on the list above."

Could that be true?

I mean, there was a very well-publicized case back in November where a user had her account blocked after she posted a video that was highly critical of the Chinese government's treatment of Uighur Muslims. In that instance, TikTok said that the block had nothing to do with the posted content, but still, it seemed a little coincidental.

There was also the leak of TikTok's moderator guidelines back in September, as reported by The Intercept, which included specific regulations around anti-China speech:

"Any broadcasts deemed by ByteDance’s moderators to be “endangering national security” or even “national honor and interests” were punished with a permanent ban, as were “uglification or distortion of local or other countries’ history,” with the “Tiananmen Square incidents” cited as only one of three real world examples."

TikTok said that these were outdated guidelines, designed for use within China, not for TikTok specifically. There were also questions around the restriction of content related to the Hong Kong protests in October (though an investigation by BuzzFeed found no evidence of this). TikTok has denied all of these claims.

So could it be that such concerns are overblown?

It's hard to know - on one hand, it may be that TikTok, which is a separate version of the same app which operates within China (called 'Douyin') is, as it says, independent of internal Chinese rules, and as such, doesn't restrict or limit content which may be critical of the Chinese regime. But a lot of skepticism remains.

If you go on the above findings, it's also possible that TikTok could limit such without specific requests, as the rules around what's allowed are built into its moderator guidelines, which would mean that such requests wouldn't be necessary. TikTok would simply limit such content anyway - and because every user sees different listings of posts in their feeds, there's no way to know, for sure, whether TikTok could be limiting the reach of certain posts.

How you view such, then, will likely come down to your own view on the app, and the controlling hand of the Chinese government. As we've noted previously, TikTok is, as per the official laws, beholden to China's cybersecurity laws, which would necessitate the sharing of data with the Chinese regime on request. That doesn't officially extend to censorship of anti-China sentiment in other regions, but it seems like a plausible connection.

As such, it is possible that China does exert more control over the app than what TikTok is communicating - and former TikTok moderators have said as much in the past. But TikTok has implemented various changes to alleviate such concerns, so there's no way to know for sure.

Which then means it comes down to how comfortable you are with the speculation.

It certainly isn't slowing TikTok's momentum - as per the latest report from Sensor Tower, TikTok once again topped the App Store charts in June, seeing another 87 million downloads for the month across both iOS and Android.

"The countries with the most installs of the app during this period were India at 18.8% of its total downloads and the United States at 8.7%."

So while authorities weigh the potential dangers of enabling surveillance of citizens via the app, users seem unfazed by the concerns.

That, as we've seen with Facebook, is not an endorsement of security in any form, but does highlight that utility will always outweigh privacy concerns. Which remains a worrying trend for the future of tech.