Apple Says its Updated, Opt-In Prompts for User Data Tracking on iOS will Come into Effect Next Week

Apple's controversial new data tracking pop-ups, which will directly ask iOS users to opt-in to tracking of their activity within each individual app, will come into effect next week as part of the launch of iOS 14.5, the company has today confirmed.

Apple made the announcement amongst various product updates at its 'Spring Loaded' event. Many industry watchers had anticipated Apple launching its updated IDFA process update at the event, and have been preparing for the expected impacts for some time.

But now, digital platforms and marketers are set to find out just how impactful the changes will be.

To recap, in June last year Apple announced coming changes to its IDFA user data tracking tools which would make all app data tracking opt-in, via explicit prompts which explain to users what data each app is recording.

Apple has called this new system ATT, or 'AppTrackingTransparency'.

The new ATT prompts, and the way they're presented, are expected to see many users opt-out of data tracking, which could have major impacts on ad targeting, particularly in regard to retargeting based on in-app purchases, and refined audience focus, which is often driven by data facilitated by in-app activity.

Facebook has repeatedly, and publicly, voiced its opposition to the update, saying that it will lead to an increase in ad costs by reducing targeting capacity. Apple has also faced opposition from the tech giants in China, who have vowed to implement workarounds in order to continue tracking user activity.

Yet, despite these oppositions, Apple is now moving to the next stage of the project.

As per Apple's announcement:

"With the upcoming public release of iOS 14.5, iPadOS 14.5, and tvOS 14.5, all apps must use the AppTrackingTransparency framework to request the user’s permission to track them or to access their device's advertising identifier. Unless you receive permission from the user to enable tracking, the device's advertising identifier value will be all zeros and you may not track them."

What, exactly, the full impacts will be, nobody knows for sure, but with concerns around data privacy, and how people's digital information can be misused, still high on the agenda due to various, ongoing controversies, the expectation is that many users will switch data tracking off when prompted, which could cause a seismic shift in digital campaign strategy.

Most recently, both Facebook and LinkedIn have been the sources of purported, large-scale data hacks, with personal information gleaned from millions of user profiles put up for sale on the dark web. In both cases, the information was not sourced from new activity, according to the platforms. But even so, such incidents keep the specter of data misuse looming, and front of mind for more consumers who are about to be served these new in-app alerts.

Reports have suggested that Facebook, in particular, could be significantly impacted by the update. Indeed, some advertisers have already reported that Facebook CPMs are rising, which may not be directly linked to the change, but could relate to more advertisers moving to broad interest targeting, instead of granular focus, which will subsequently see an increase in competition to reach these groups.

Many advertisers have also been working to gather up attribution data to establish averages, with Facebook removing 28-day attribution as a result of the update. That will mean that much more ad targeting is based on estimates, as opposed to actual results, which will undoubtedly doubt see at least some reduction in campaign performance.

But then again, it may not end up being as bad as anticipated.

A recent report from Apps Flyer has put a slightly more positive spin on the change, with results from over 13.2 million exposures to the new IDFA prompts resulting in 41% of people choosing to allow tracking, which is a much higher opt-in rate than many are expecting. 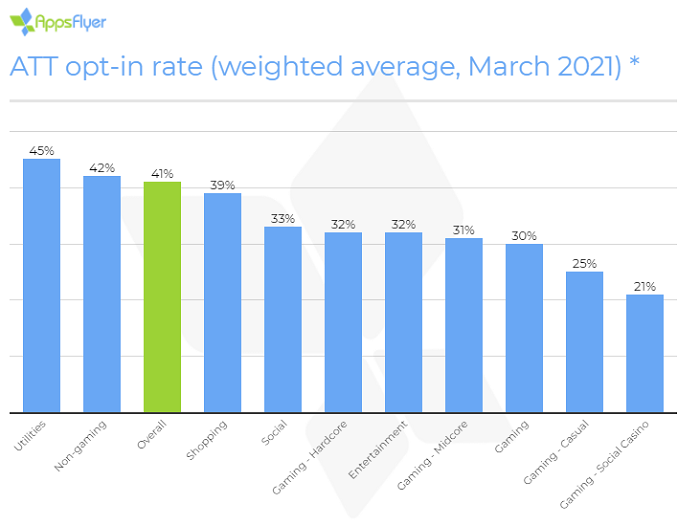 That could mean that, overall, the impact is not as significant as predicted, and there is a pervading sense that many users are not as concerned about app tracking as some are expecting, with a lot of people simply viewing it as a means to ensure they get more targeted ads, as opposed to some insidious monitoring of their in-app actions.

Either way, we're about to find out. According to CNBC, the ATT update it's expected to get a full release on Tuesday next week.

Best to keep an eye on your campaign results and monitor for any significant shifts.