You may have only heard about it recently, but Clubhouse actually celebrates its one-year anniversary this week.

The audio social app, which has seen a sudden rise in popularity as people seek out new ways to socialize amid the pandemic, is still in invite-only mode, and is still only available on iOS (for now). But even so, according to new data from app analytics provider App Annie, Clubhouse is fast closing in on 13 million total downloads, with almost a third of them occurring in the US. 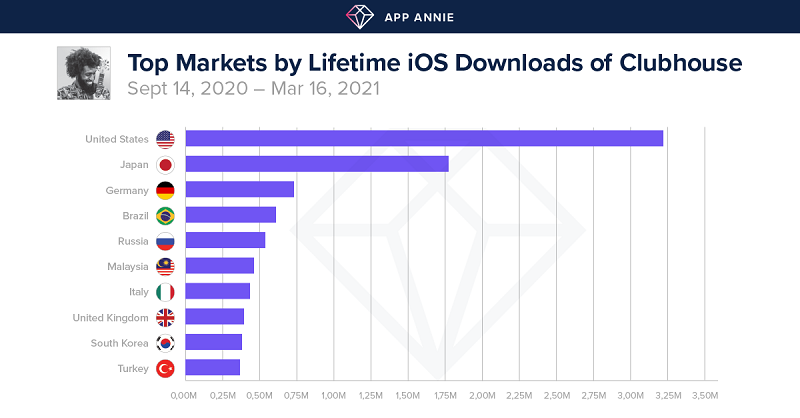 As per App Annie's Lexi Sydow:

"Clubhouse turns 1 on March 17th, 2021 - the app officially launched on the iOS App Store on Sept 14, 2020, and only 6 months later has seen 12.7 million downloads globally with the US, Japan, Germany, Brazil and Russia seeing the largest footprint. Garnering this level of success from invite-only access and limited to iOS is particularly impressive and has caught the attention of other publishers - particularly those in the social media space like Twitter and ByteDance."

Twitter is of course working on its own variation of the same, in Spaces, which looks set to become Clubhouse's biggest challenger. Facebook is also working on an audio-only version of its Messenger Rooms feature, which could gain significant traction if it's then tied into Facebook groups. Given this, there is some uncertainty around Clubhouse's long-term viability. But its opportunity is there, it could become a more significant platform, particularly if it can establish strong connections with its top broadcasers and creators.

Along that line, Clubhouse this week announced a new 'Creator First accelerator program, which will see the app provide financial support and expertise to a selected group of creators, with a view to helping them build their audience and monetize their Clubhouse efforts. Clubhouse will ensure that those taking part in the program generate at least $5k per month from the app - and if it can tap into the right voices, and keep their audiences engaged, and stop those creators from broadcasting elsewhere, that will be a big step.

That'll be a key challenge - but aside from retention and growth, it's also interesting to note where Clubhouse is gaining traction, with App Annie's data showing total iOS download numbers as follows:

America is clearly the app's core base, but Japan also looks to present significant opportunity, with Brazil and Malaysia also being high-growth regions that could see strong take-up.

It's worth noting, too, that Twitter is also hugely popular in Japan, which could present similar challenges in terms of Spaces take-up. But still, the fact that Clubhouse is gaining traction around the world is a positive - and again, this is still in the invite-only phase.

There's still a lot to come in the audio social race, and it'll be interesting to see where these numbers stand a year from now. Will Clubhouse still be a thing then - or will the bigger players eventually strangle its growth, and smother it by bringing their replicant features to their massive user communities?

Clubhouse's growth this far is impressive, but the next steps will be key, and it'll be interesting to see where it goes as the platform opens up to more people.