As Facebook continues to deal with questions about its content moderation approach, the platform is also working to add its next billion users, with the announcement that it's acquired a stake in Indonesian eCommerce 'super app' Gojek. 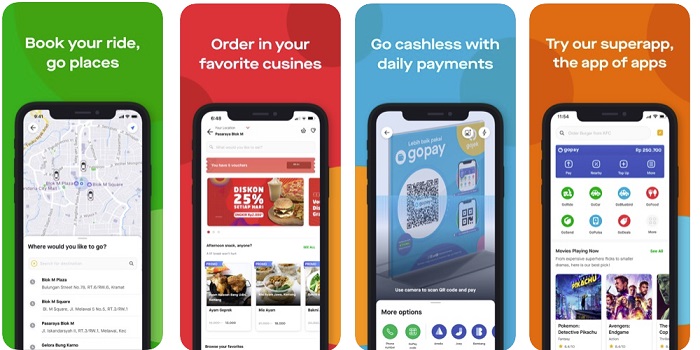 "Since launching its app in 2015, Gojek has helped bring hundreds of thousands of merchants onto its platform, giving them access to more than 170 million people across Southeast Asia. Its payments business processes billions of transactions each year and owns the largest e-wallet in Indonesia."

As you can see in the screenshots above, Gojek facilitates food ordering​, shopping, commuting, and making digital payments, all within a simple app interface. The platform has become a key connection tool within the region, where its population is some 270 million people is gradually coming online, and becoming more connected to the evolving digital marketplace.

The move will enable Facebook to link into this rising opportunity, with the capacity to provide advanced digital tools to help more Indonesian businesses maximize the opportunities of the digital age. That will also better ingratiate Facebook as a key platform within that economy, which it will then be able to use to connect more people, and maximize its own evolving eCommerce offerings.

And as per Facebook's note above, it's also key for Facebook to link into the rising use of digital payments in the region. Ideally, this would be where Facebook's Libra would come in and help it become the dominant payments platform, offering free exchange within its apps. But Libra is still in development - yet, even without it, Facebook has been working to bring Facebook Pay to Indonesia for some time, and this investment will help advance those efforts.

But like India, Facebook's growth in Indonesia thus far hasn't come easy. Many Indonesian officials are skeptical of the social giant and its intentions, and while WhatsApp is the most popular messaging app in the nation, Facebook has repeatedly seen its apps limited or restricted due to Indonesian Government concerns about their usage.

That's what makes its investment in Gojek more important. By buying into a local company, Facebook is immediately able to link into a key service platform within the region, which will give it more footing from which to launch its own tools, and maximize its presence in the market.

Facebook's taken a similar approach in India, where it recently purchased a $5.7 billion stake in local internet provider Reliance Jio. Rather than trying to force its own apps into the market, Facebook is looking to buy its way into existing platforms, from which it can establish stronger ties, and merge its tools into existing digital eco-systems.

Given the audience numbers at stake (India is expected to reach 850 million internet users by 2022), the growth benefits for Facebook are clear, and it'll be interesting to see how it's able to develop dedicated eCommerce and digital marketing tools for these regions - and whether that accelerates Facebook's broader eCommerce plans.

If The Social Network can get it right, this could, indeed, help it bring in the next billion users, while it could also help establish Facebook as a key platform that facilitates the next stage of digital evolution in more emerging markets.