As Messenger adoption grows – with messaging apps now outpacing social platforms in terms of overall users – Facebook’s working to keep pushing user demand by adding in new options to enable you to share more within your messaging experience.

Their latest addition is improvements to the visuals you can share in the app – now, you can add 360 images to your Messenger chats, while you can also upload videos in HD, providing new, immersive content tools. 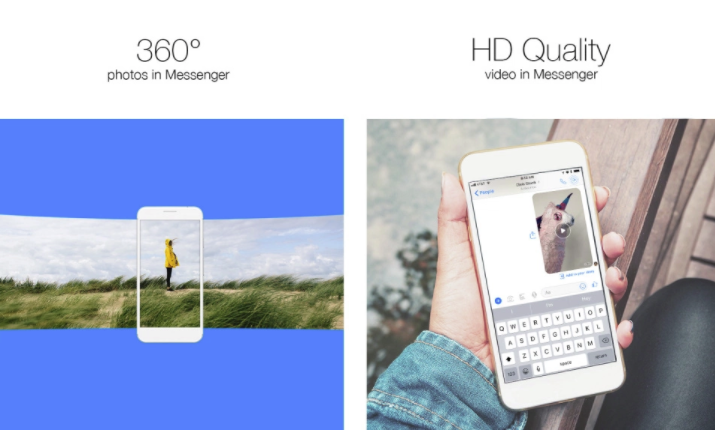 The addition of 360 content ties into the wider popularity of 360 posts – Facebook reported last August that more than 70 million 360 photos have already been uploaded to The Social Network. Facebook added to this but making it easier to post 360 images, and use them as cover photos, which has since seen a further increase in their adoption.

Adding 360 images to Messenger will give users more tools to share their perspective, while also taking another gentle step towards full virtual reality, which is where Facebook sees social headed in future.

The capacity to share HD video also provides new options – now you can make sure your videos are crisp and good looking, which could be an important consideration for brands utilizing Messenger to stay in contact with their audiences.

“For 360 degree photos in Messenger, simply set your phone camera to panorama and snap a photo or capture a 360 degree photo using a 360 photo app or camera. Then share it in Messenger as you would a normal photo. From there, we’ll convert it to an immersive, envy-inducing photo that your friends and loved ones can experience on mobile by tapping and dragging the photo or by moving their phone, and on Messenger.com by clicking and dragging.”

360 photos and HD videos will be signified within Messenger by either a compass icon in the right-hand side of a panoramic photo (for 360 content) or a ‘HD’ or ‘SD’ marker on videos.

As noted, Facebook has been working to provide more tools within Messenger to improve sharing, including Stories (Messenger Day), improved tabs, games and various other options. At the same time, there is a risk that all these new additions could make the app too cluttered – Messenger chief David Marcus acknowledged this earlier in the year, saying that they would be focused on “massively simplifying and streamlining Messenger” following a raft of additions.

As yet, that hasn’t come to pass, and the added risk of over-cluttering is that it may make it more difficult for Facebook to monetize Messenger, as users increasingly seem to be content to use it as a simple messaging app, as opposed to Facebook’s vision of a more all-encompassing communications tool.

360 photos and HD videos are less of a concern in this regard, as they don’t require a significant change to user process, and add to the basic options available. But it is interesting to watch Messenger adoption rates of these new options, and to see whether users are warming to alternate uses of the app.

HD videos for Messenger are being rolled out to users in Australia, Belgium, Canada, Denmark, Finland, France, Hong Kong, Japan, Netherlands, Norway, Romania, Singapore, South Korea, Sweden, Switzerland, Taiwan, the U.K. and the U.S. on iOS and Android. 360 photos are available worldwide, on both iOS and Android, in the latest version of the app.