Facebook is looking to help Messenger desktop users celebrate the holiday season with a new set of AR effects, filters, and 360-degree backgrounds, the first effects of their type to be added to the desktop version of the app. 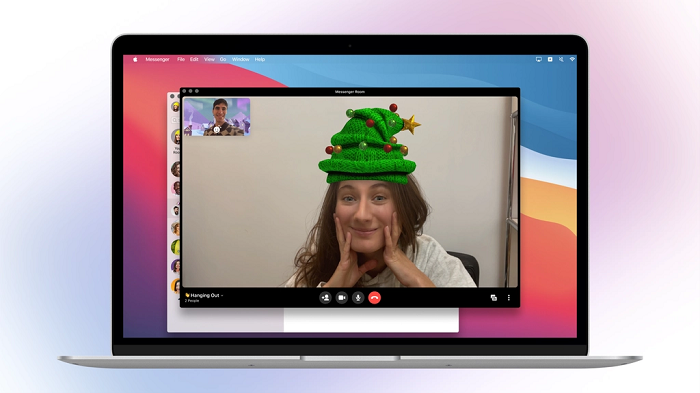 Users have been able to add AR effects within their regular, in-app Messenger interactions for some time, with Facebook adding 360-degree backgrounds in the app back in April. Now, they'll be available in the desktop version as well, with a range of seasonal options - as explained by Facebook:

"You can choose from a variety of holiday-themed AR effects that begin rolling out today, including Santa’s Lap, Winter Village, Christmas Tree Hat, Grumpy Yeti, Festive Lights and Christmas Elf"

So if you wanted to look as zany as the person in the above example, now you can, with digital hats and masks to help spread Christmas cheer within your Messenger desktop calls.

Facebook announced the full roll-out of the desktop version of Messenger back in April, after testing it out in selected markets earlier in the year. At that time, Facebook noted that it had seen a more than a 100% increase in people using their desktop browser for audio and video calling on Messenger, as they sought to stay connected during the pandemic. Given this, Facebook sought to provide more dedicated tools to cater to the increased demand - and with COVID-19 set to keep families apart during the holidays, that will no doubt see Messenger desktop usage increase again over the next few weeks.

As such, these new additions make sense, while they also bring the desktop version of the app more into line with the regular mobile app.

You can download the new Messenger for Desktop app in the Mac and Windows stores.