As Twitter continues to work to improve its tools to combat on-platform harassment and abuse, Facebook's also rolling out some new features along the same lines for Messenger – which, at 1.3 billion users, is now a rising outlet for similar forms of misuse.

“We’ve heard stories from people who have blocked someone only to encounter the same harasser using a different account. In order to help prevent those bad encounters, we are building on existing features that prevent fake and inauthentic accounts on Facebook.”

Twitter users regularly encounter similar issues – you block someone and they come back at you minutes later under a new account. Twitter rolled out new processes to curb such behavior earlier in the year, and Messenger looks to be taking a similar approach, with a system that will detect the IP address of the person you’ve blocked, then deny accounts from the same address from contacting you.

In other words, if you block someone and they set up a new account from the same IP, the only way they’ll be able to communicate with you on Messenger is if you connect with them, not the other way around.

Facebook’s also providing users with a new way to ignore messages by moving them to their ‘Filtered Messages’ tab. 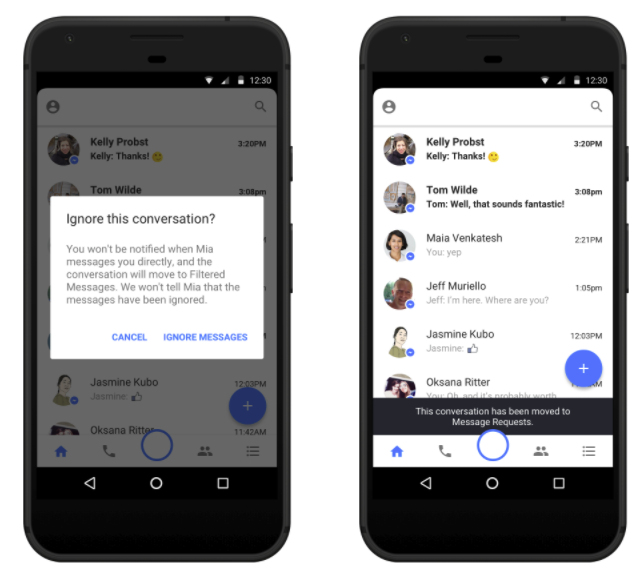 “If someone's being harassed, blocking the abuser sometimes prompts additional harassment, particularly offline. We’ve also heard from groups that work with survivors of domestic violence that being able to see messages is often a valuable tool to assess if there is risk of additional abuse.”

As displayed in the above screenshot, this new option will enable you to stop getting notifications about a particular users’ messages, while the sender also won’t be able to see if their messages have been read by you. You’ll still be able to view the messages whenever you want to, but it neuters the offenders’ ability to bombard you, while also removing a level of gratification on their part, as they won’t even know if you’re reading them.

In many ways, Facebook has advantages over Twitter and other platforms in that Facebook requires more identification to create a profile, better tying each user to a real-world identity. There’s no perfect system, of course, and offenders can still get through, but Facebook – and by extension, Instagram – is able to negate more of the negative behavior through their advanced detection and set-up options, which is part of why Twitter sees the brunt of criticism on this element.

But the negative elements of social media exist on all platforms, which means that all platforms need to do everything they can to protect users and provide a safe environment.

Providing more options can only be a positive, and these new tools, while relatively minor, add to the expanded privacy and control options, helping to reduce more avenues for online attacks.