Following the launch of Facebook's political ad disclosure tags in the US earlier in the year, The Social Network has now rolled out the same in the UK, while also announcing new exemptions for media outlets who report on political topics. 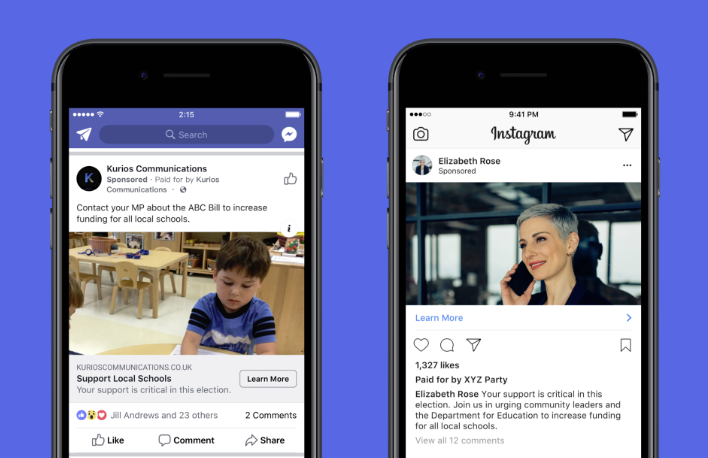 Facebook first announced the expansion of their political ad requirements for UK advertisers back in October, and is now enforcing those measures.

"Ads related to politics will be housed in an Ad Library for seven years. Advertisers will be prevented from running a political ad if they aren't authorized. If we learn of an ad that requires authorization and is running without a “Paid for by” disclaimer, we'll take it down and place it in the Ad Library. This helps shine a brighter light on political advertising and offers a resource for news organizations, regulators, watchdog groups and the public to hold advertisers more accountable."

In addition to this, Facebook has also announced that, due to its improved measures to detect "politically motivated actors looking to use false news or sensationalism as weapons", content from news outlets won't be included in its political ad library.

"We want to do all that we can to support journalism, and we know the inclusion of news ads has been problematic for a number of news organizations. We'll also continue working with publishers, platforms and fact-checkers to increase safeguards and transparency in this area, which should lead to greater accountability for both Facebook and our advertisers."

That seems like a fairly confident step for a platform that's suffered ongoing headaches as a consequence of not policing such interference. Facebook says that, initially, it will use listings from "a variety of established news industry groups to help inform which news organizations receive authorization exemptions", helping to keep legitimate news organizations separate, and negating the need for them to apply for specific approval to run relevant ads.

Facebook obviously still has a way to go in ensuring it's platform isn't spreading divisive political content and false news - and really, its a problem they'll likely never stamp out. But measures like these underline that The Social Network is taking the issue seriously, and is looking to address such concerns where possible. Political manipulation, however, can take many forms, and there may be no way to stop it, but given Facebook's size, it does have an obligation, at least to some degree, to do what it can.

It'll be interesting to see how such measures impact future political processes.