Facebook has released its latest ‘Topics to Watch’ report, which highlights all the key subjects gaining momentum, based on mention volume, across The Social Network.

The monthly Topics to Watch reports can be a great way to stay ahead of the latest trends and shifts – according to Facebook’s research team, up to 80% of the topics they've identified in their monthly reports go on to become more significant movements. That means that if there's a subject of relevance to your niche, you might just be able to get ahead of the curve, and capitalize on the rising attention.

But 'niche' is important to note. While you can see from the data that these topics are clearly seeing significant discussion increases, they tend to be very specific.

If there's a brand angle for your business within any of these trends, it may be worth tapping in with content and/or campaigns.

First up is 'console games', which Facebook says are seeing a resurgence due to technological advancements. 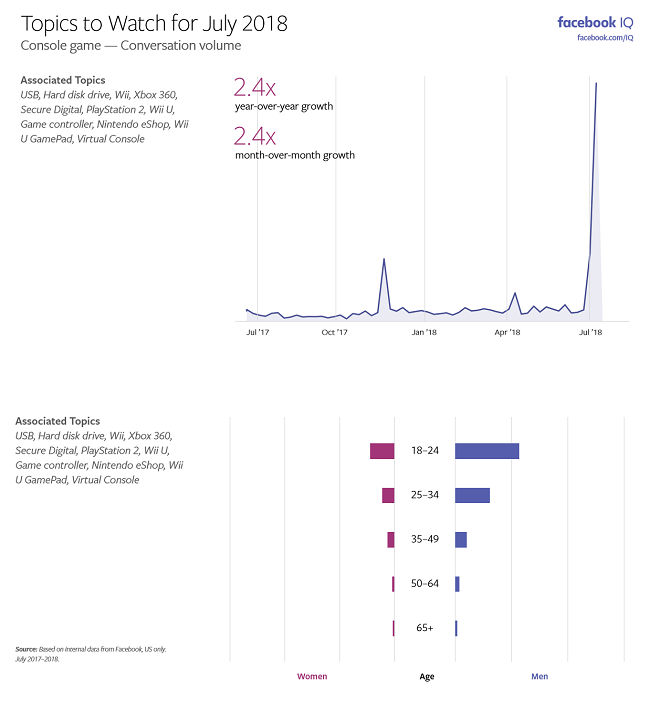 "Given the rising popularity of streaming, brands are now considering how they might move console games to the cloud to allow people to play exclusive games on other devices. Instead of having to buy a specific console to play a certain game, players may soon be able to access their favorites across all of their devices. For mid- and hardcore gamers alike, cloud-based video games could truly be a game-changer."

It might be worth breaking out the old retro game references and icons to help promote your content.

Facebook also says that 'kick' is being used more often. 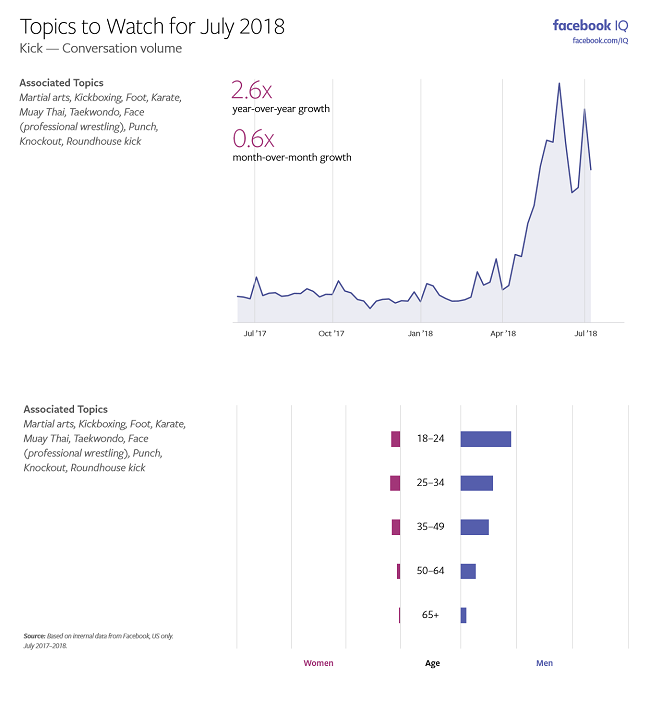 Seems vague, right? Maybe there are more stories of assault, more references to kicks - I mean, it's not a product or trend-specific term.

Facebook says it's related to kicks being used in more workout-related conversations:

"Kicks are on the rise, as people increasingly isolate specific elements of sports to work on improving their form."

Could be hard to build a strategy around, but may be worth further investigation.

Facebook also highlights 'palette', in regards to digital art, as a growing trend. 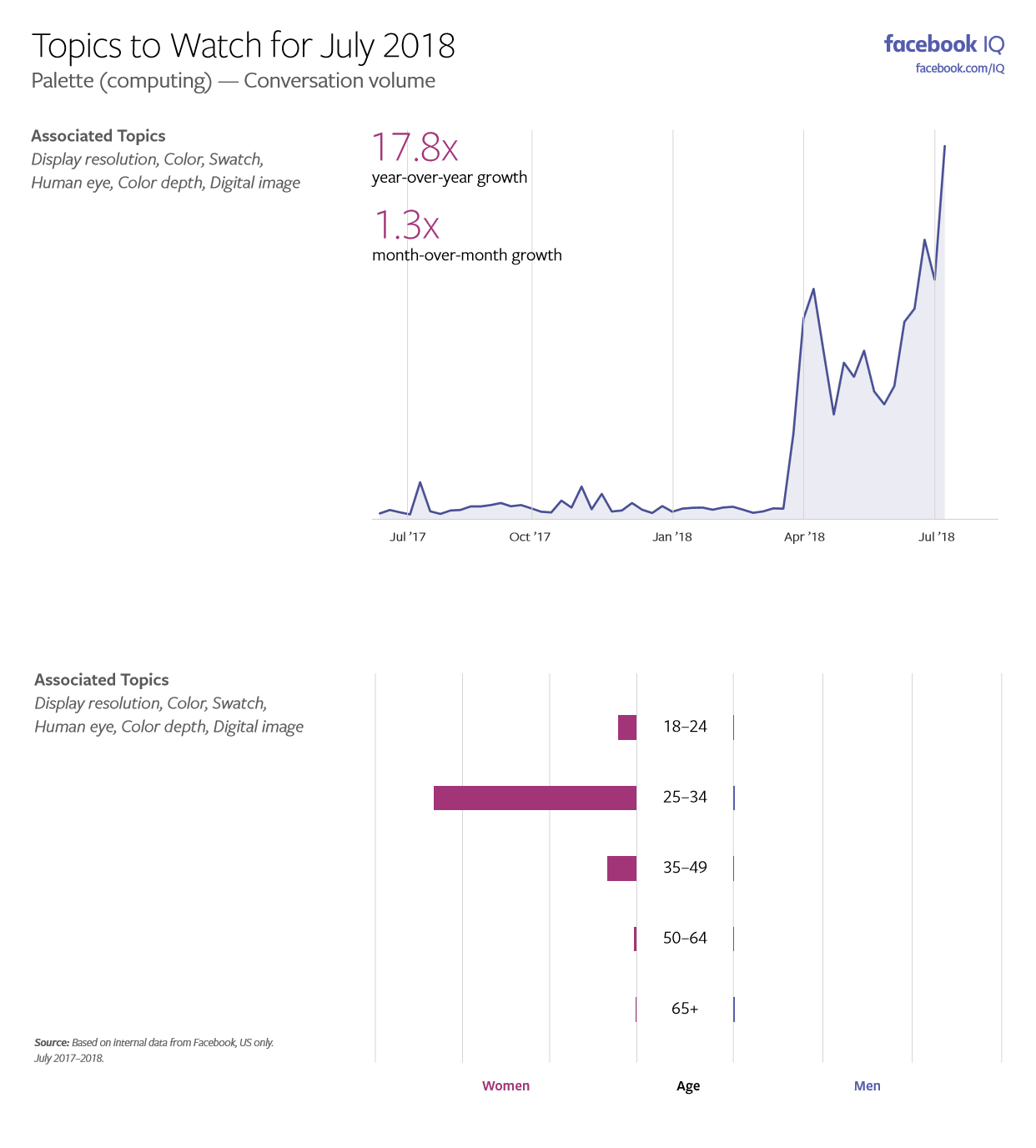 Facebook says that this is due to evolving digital options relating to image composition:

"For many visual artists, the transition from physical to digital painting has been less easy, as colors don't always render as they appear on screen. New and improving software is bridging this gap, enabling people to blend colors on a screen similarly to how they would mix paints."

Also on the rise - 'suspense'. 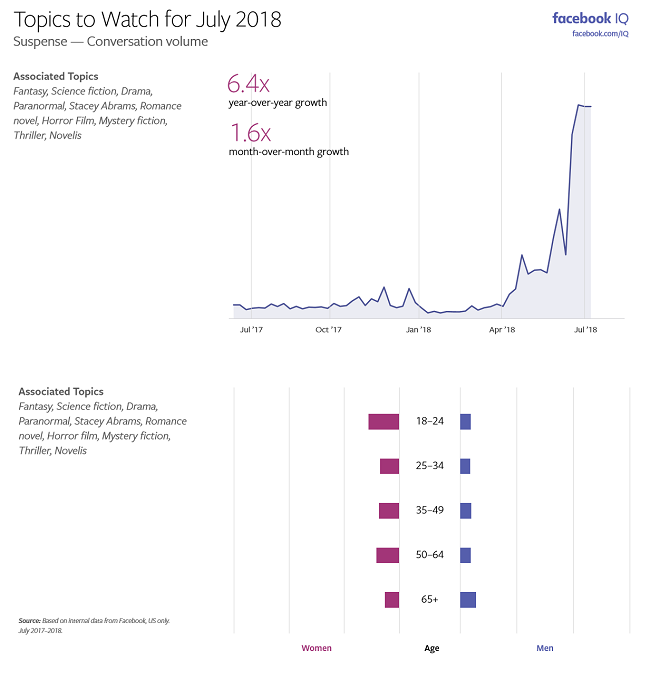 Facebook says that more films are relying on suspense over gore, building rather than surprising in quick bursts.

"Current horror and thriller films rely less on jump cuts and more on realism. The paranormal also has a growing following, with new TV shows and movies that stylistically harken back to the 70s and 80s. Directors find psychological and emotional devices go a long way when it comes to keeping their audiences on their toes."

Also on Facebook's list is the spiritual concept of the 'third eye'. 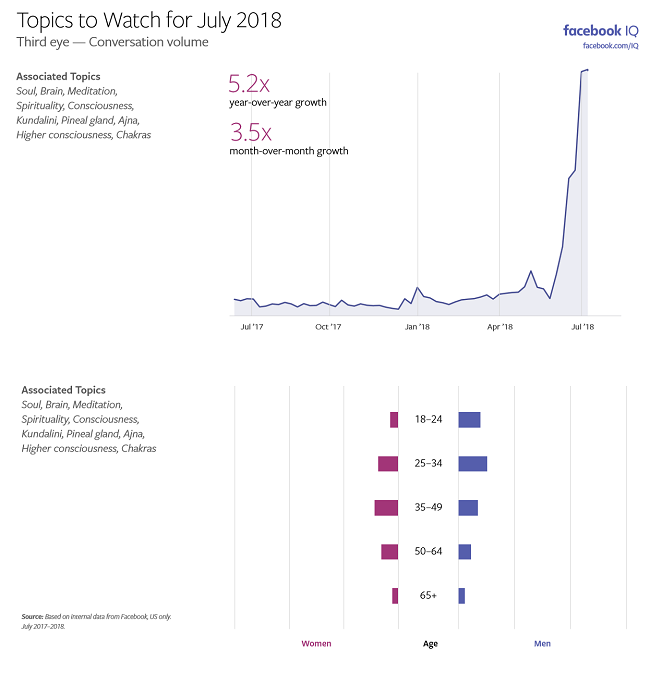 The 'third eye' relates to Eastern religions, which discuss the third eye as "a gateway to spiritual awareness". Maybe worth noting for meditation and yoga-related businesses.

And the last rising topic on the list is another spiritual concept, 'wu wei'. 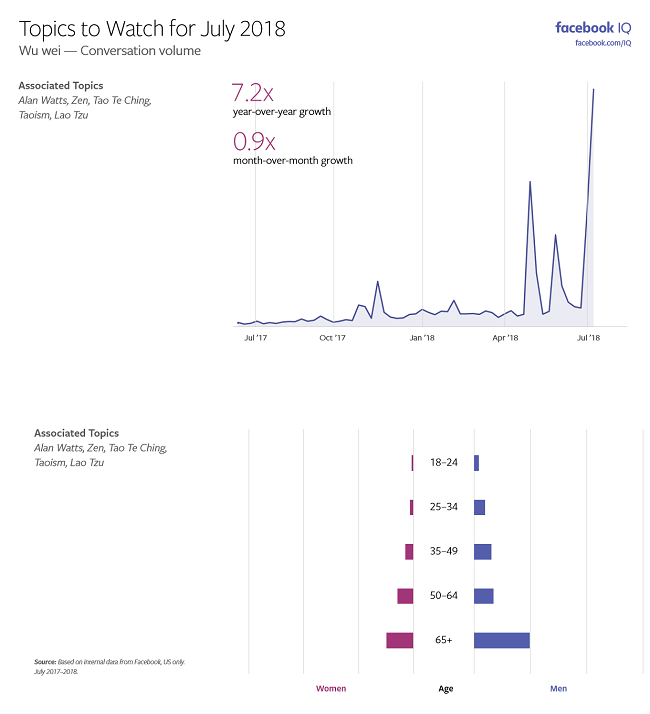 "wu wei posits that people can actually achieve more by doing less. This Taoist philosophy encourages people to slow down and be mindful, living their lives more naturally, authentically and effortlessly. And as people search for productivity hacks, wu wei proves to be an interesting new tactic."

Could we be on the brink of a new trend countering the 'hustle' culture of the past few years?

As noted, Facebook's 'Topics to Watch' reports offer some great insight to help target your social campaigns and content, with nigh-specific notes that can enable you to tap into rising conversations. If any of these subjects relate to your brand, it may be worth further investigation to capitalize on the discussion.