With influencer marketing becoming big business, social platforms are coming under more pressure to verify their audience numbers, and ensure that the engagement metrics and audience counts they display are reflective of actual, real people - not bots purchased from third-party peddlers.

That's bad news for the fake sellers. In a recent, precedent-setting case, New York's Attorney General ruled that selling fake social media followers and likes is essentially illegal, in relation to the specific actions of a company called Devumi, which has since gone out of operation. And now, Facebook has announced that it's taking legal action against several providers which it's found to be dealing in fake social media engagement.

"Today, Facebook and Instagram filed a lawsuit in US federal court against four companies and three people based in the People’s Republic of China for promoting the sale of fake accounts, likes and followers. They did this on both Facebook and Instagram, as well as other online service providers including Amazon, Apple, Google, LinkedIn and Twitter. We’re also enforcing our rights under US intellectual property law for their illegal use of our trademarks and brand."

This is a significant undertaking - the fact that Facebook is not just banning these providers from its platform, but is actually seeking legal recourse, is an elevation of previous action, and may reflect the significance of the aforementioned Devumi case.

Now that a court has found such action to be against the law, Facebook's lawyers have clear legal ground to pursue such providers, which could see The Social Network - and other social platforms - ramp up their action against fake sellers.

And it's not like they're hard to find - search for 'Buy followers' on Google and this is an example of what you'll get: 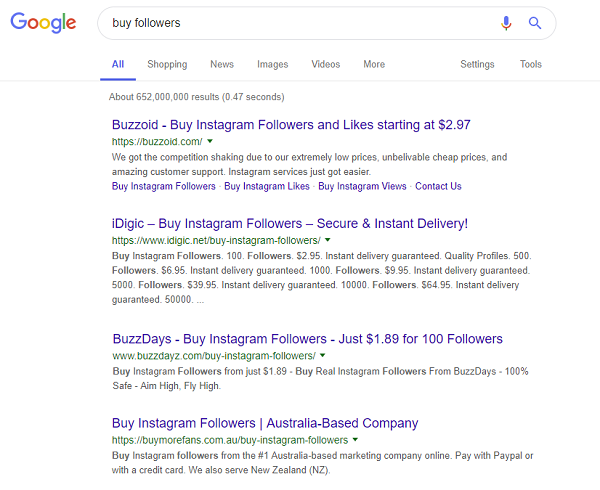 Facebook says that by filing this lawsuit, it's hoping to reinforce that such activity is will not be tolerated, again pointing to further action.

"The lawsuit specifically asks the court to prevent these people and entities from:

This also comes amid increased on-platform action against fake sellers from Instagram and Twitter, with Twitter actually seeking to redefine its performance metrics in light of its push to remove fake profiles (i.e. Twitter is removing fakes at such a rate that its monthly active user counts are going down, which is actually a good thing, but looks bad from a basic metric standpoint).

Depending on how the case proceeds, this could be a major shift in the battle against fake sellers. Trademark infringement is another element of the filing, and that may get more focus, but another ruling against selling engagement and audiences on social networks could add to legal momentum against the practice. And that would be very bad news for those involved in what's become its own side industry.

Facebook has only made a brief announcement on the Facebook Newsroom blog, but the implications of the subsequent findings could be big.