Facebook’s making a big push ahead of the holidays to maximize opportunities for creators, and help them reach more people during the break period.

“We recently launched a new design for Facebook Live on desktop and mobile to make it easier for creators to go live. We’ve simplified the navigation menu so you can more easily access the insights and tools you need before and during your live broadcast.” 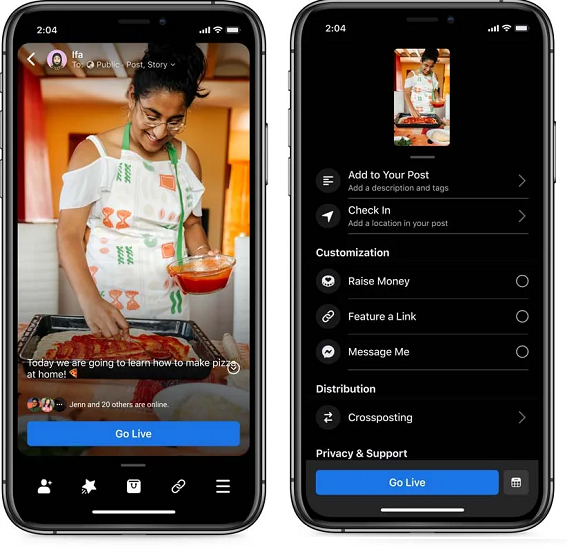 As you can see here, the new format makes it much easier to implement the various live-stream options available within the composition process, which will help live creators maximize their streams.

And now, Facebook’s adding some additional engagement features to help live-streamers get more from their efforts.

The biggest addition is ‘Featured Links’, which will enable live-streamers to share multiple third-party website links within their broadcasts. 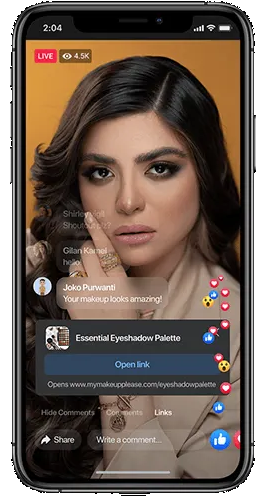 That will enable broadcasters to drive more direct traffic from their streams, and with the rise of live-stream shopping, that could provide significant opportunity for streamers to generate more interest and value from their efforts.

Facebook is also enabling live-stream poll creation on mobile devices, which has up till now only been available via desktop creation. 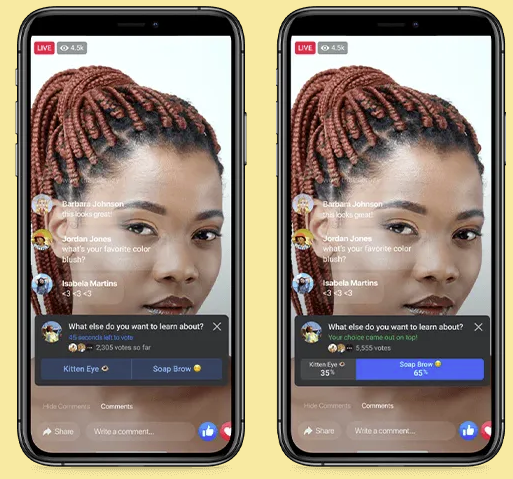 That provides another way to engage your viewers, and boost interaction and community with your streams.

Facebook’s also expanding the number of people you can co-broadcast with while using Live: 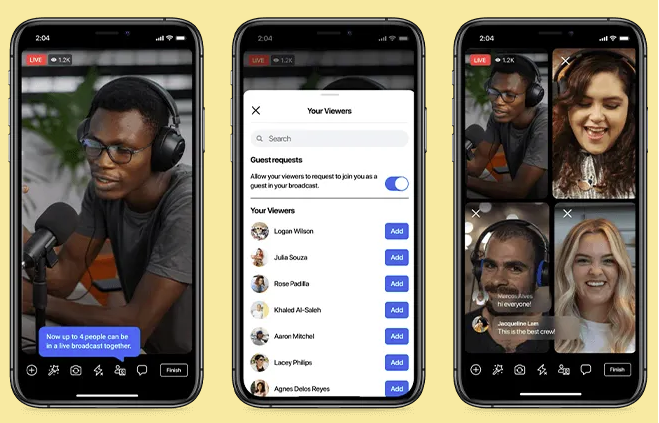 Which is a big turnaround, because back in 2019, before the pandemic hit, Facebook actually removed the ‘Live with’ option entirely due to lack of use and the cost of supporting the function. The rise in video connection over the last two years has reignited interest in the format, and Facebook is now very clearly looking to tap into that growth (Facebook re-added the option to stream with another person in April 2020)

Facebook’s also bringing live-stream notifications to Facebook Stories to help improve stream discovery, by highlighting them within the Stories bar at the top of the News Feed, while it’s also adding new badges to help streamers recognize their top supporters in the comments, and a new ‘Front Row’ experience to further highlight fans. 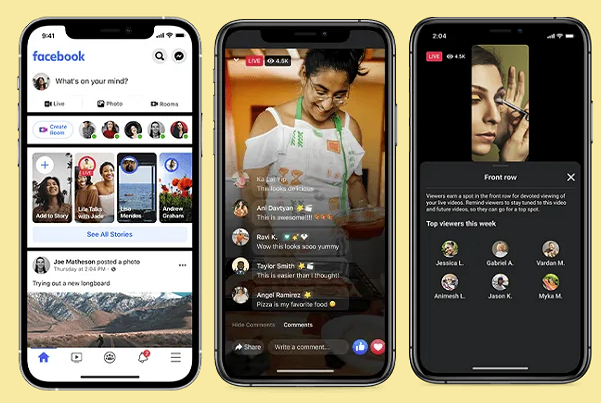 Facebook’s also looking to help live-streamers engage in more conversations by adding the ability to react and respond to comments quickly and directly from a notification.

“We’ve also introduced improved comment ranking features that help creators find and engage with the most relevant conversations. These features include elevating comments and replies from creators to the top of the discussion thread on a post and decreasing the visibility of spammy or repetitive comments.” 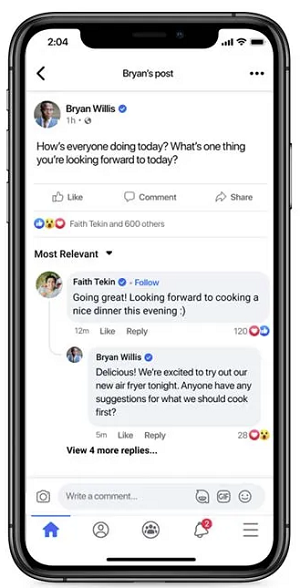 That will help more fans find conversations where the creator has engaged, which could spark even more discussions around broadcasts and content.

Facebook’s also looking to highlight live creators via new units in the News Feed that will recommend public figures and creators to follow, based on user interests, while it’s also testing ways to increase the variety of content highlighted to users, with a specific focus on boosting emerging creators.

Finally, Facebook has also officially announced its new ‘Spotlight Conversations’ post option, which was spotted in testing back in October. 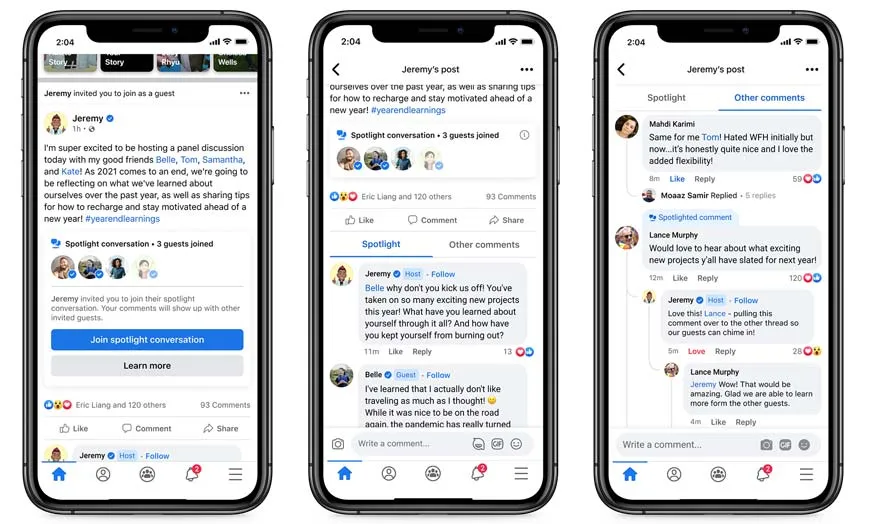 As you can see here, the Spotlight format will include two comment tabs, one for those mentioned in the chat, and one for all other comments.

“With Spotlight Conversations, you can have an engaging comment-based discussion with your chosen guests. These conversations will appear as posts with two separate comment sections: one for you and your guests, and one for everyone else who wants to follow along and discuss. Spotlight Conversation enables you to engage in a focused space while also expanding your reach to a broader audience.”

That could facilitate more interview-type interactions, which readers can then more easily follow, and ensure they get the full context of the discussion.

In addition to these new posting tools and options, Facebook’s also announced a new bonus program for Facebook Live creators, which will pay eligible creators based on the performance of their live broadcasts.

That’s similar to the payment systems that Facebook, Instagram, Snapchat and YouTube now have in place for their short-form video options, which they’re looking to boost in order to quell the rise of TikTok.

Direct funding is another way to go about incentivizing content – though it does face challenges in terms of sustainability and fueling the creative ecosystem.

Indeed, Snapchat has faced various issues with its Spotlight payments, with its most active creators quickly building reliance on that funding, then losing out when it was reduced. That’s an important consideration for all platforms to keep in mind, that once you start funding creators, they will come to rely on it, eventually, and you’ll need to have a replacement system to phase it out at some stage.

The new Live funding program is invite-only, and will begin ‘in the coming weeks’.

There’s a heap to consider here, and a heap of new considerations for Facebook creators, which could all deliver significant benefits. The broader impetus here is that Facebook, and parent company Meta, is looking to win back younger audiences by first attracting the top creators and stars that they want to see. If you can win over the creators, you win back the audience, and Facebook will be hoping that these additions will provide a more enticing option than TikTok, and other apps, for those looking to maximize their opportunities.

That’s likely a better way to go than adding in flashy new AR tools and features, which Facebook hasn’t been great at, at least in terms of creative innovation. Most of the platform’s new additions actually come from TikTok and Snapchat anyway, but where Facebook can really win out is in audience reach, and funding, which is where these new elements are focused.

Will that help to make Facebook the cool place for influencers to post once again? Time will tell.