Facebook’s testing out a new way to host more focused public chats in the app, via a new ‘Spotlight Conversation’ post option, which, when enabled, separates replies from specific users into a new chat thread. 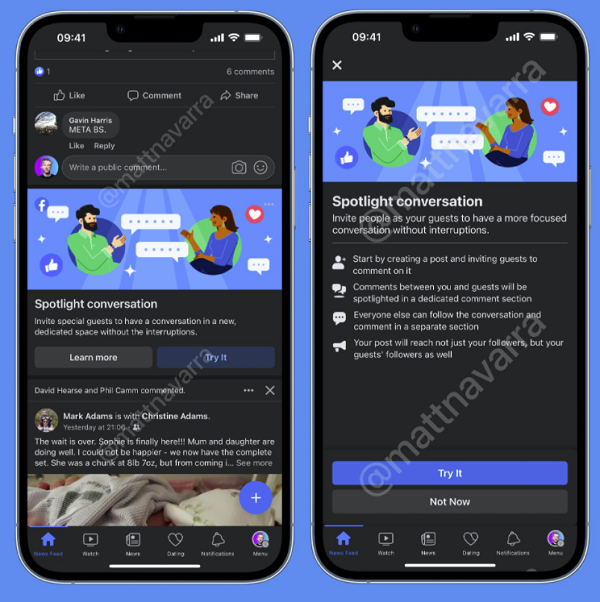 As Facebook explains in these intro screens (shared by social media expert Matt Navarra), Spotlight Conversation enables you to invite specific people to respond to a post, with their responses then separates into 'a dedicated spaces without interruptions’. Other users can still see your post and comment on the chat, but their replies are placed in another tab within the reply stream. 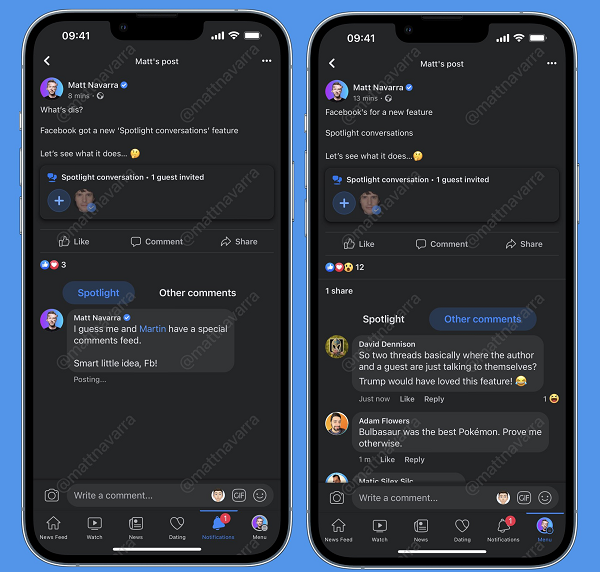 As you can see here, the original post shows the invited contributors to the chat, and the discussion between the host and guest/s is then displayed in a dedicated ‘Spotlight’ chat stream, with all other replies on an ‘Other Comments’ tab.

Which is actually very similar to Twitter’s reply control options, which it added last August, enabling users to limit who can reply to their tweets to only those they @mention.

Part of the impetus behind that update was the case of people using tweets to conduct live-stream interviews, which were often difficult to follow along with, because anyone could reply to a tweet thread. By limiting who can actually reply, that makes it much easier to stay on topic, and for viewers to read through a dedicated stream of back and forth responses between the focus profiles within a tweet thread.

Facebook looks to be honing in on similar here, which could provide more means to share real-time chats in the app for popular users, and could expand the utility of Facebook reply threads to Q and A, celebrity interviews, product info sessions, etc.

It seems like a fairly minor addition, but one that could be of specific benefit - and it may well be that by sharing one-on-one interviews and discussions within the app, that could open up new possibilities to reach a larger audience with such, and maximize response to your Facebook posts and discussions.

I mean, Facebook users, of course, generally want to reply for themselves, and participate where they can. But maybe, there’s also value in restricting your reply threads in certain cases, and facilitating more direct chats.

There could also a level of risk there. Say ‘Antivaxxer 1’ wants to interview an ‘expert’ on vaccines, and keep that reply chain separate from doubters. That could facilitate new forms of misinformation and reinforcement, which could be problematic.

It’s also somewhat similar to another Facebook test in threaded replies, which doesn’t enable participation, as such, but does add another angle to post reply threads.

It seems that Facebook is looking for more ways to utilize posts and replies to expand your potential options, each of which will have specific use cases and benefits, without major technical implications on Facebook’s end.

That could open up new opportunities – there’s no word on the full scope of this new test, but both Spotlight Conversations and threads are now available so some users in the app.

UPDATE (11/4): Facebook has clarified one important note on this new functionality:

"When a guest joins a Spotlight Conversation, their followers receive a notification, providing them the opportunity to increase their reach and connect with new fans."

So aside from providing a means to facilitate more direct discussion, Spotlight chats could also help to alert Facebook users to the chat, and improve post reach.

Facebook says that the option is currently being tested with a small group of public figures and creators. There are no plans for an expanded roll out at this stage.