Despite criticism from various government groups, Facebook looks set to push ahead with its plan to add end-to-end encryption in all its messaging apps, with the company planning to announce the next phase of its process at a tech conference in Lisbon this week.

That next stage will involve raising awareness of the already present end-to-end encryption option available within Messenger - according to Reuters, Facebook will be looking to increase usage of this option in order gather more data about its use, which Facebook will then be able to use to establish additional safety measures before it makes encryption the default setting.

So how will Facebook increase awareness of this feature?

"The new Privacy and Safety Hub will show you more about your privacy settings and features like Secret Conversations, which you can use for end-to-end encrypted messaging. The site also highlights ways to use tools like blocking and reporting to make it easier for you to stop unwanted interactions and report an issue like someone impersonating a friend or celebrity." 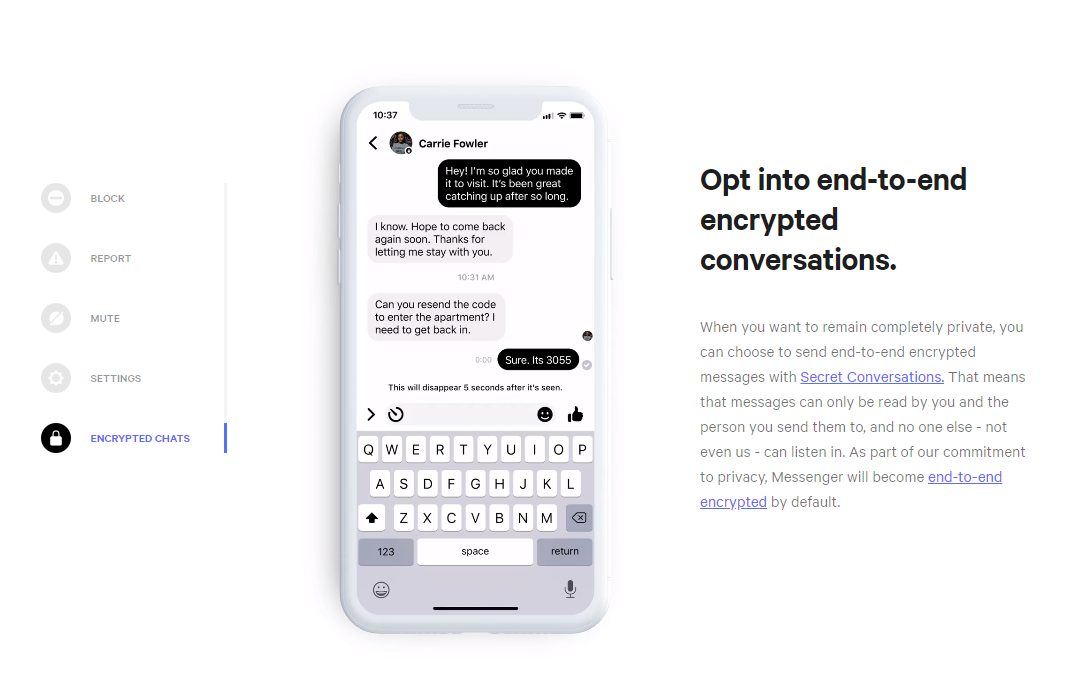 As you can see here, the new section of the Messenger website provides simple overviews on how to use the various Messenger privacy functions, while it also includes links to Facebook's policies and documentation on platform rules and systems.

By raising awareness of such tools - specifically the existing encryption option - Facebook will be hoping to increase usage, and subsequently move further towards enabling full encryption in all messaging interactions.

Facebook first announced its plan for full messaging encryption back in March, when CEO Mark Zuckerberg published a 3,000 word manifesto on the future of the company's offerings, which focused, primarily, on increasing user privacy.

"I believe a privacy-focused communications platform will become even more important than today's open platforms. Privacy gives people the freedom to be themselves and connect more naturally, which is why we build social networks."

Among the various points of note within Zuckerberg's post, he outlined the company's encryption plan, which would increase user protection - but it would also, according to various government groups, provide new opportunities for criminals to hide their activity.

Indeed, an open letter from representatives of the US, UK and Australian governments published in early October called on Facebook "not to proceed with its plan to implement end-to-end encryption across its messaging services without ensuring that there is no reduction to user safety and without including a means for lawful access to the content of communications to protect our citizens”

Facebook's new push to get more people to use its existing encryption option may be a move to appease such concerns - as noted, Government organizations have called for more reassurance that the capacity won't be used to hide criminal activity, and by getting more data on such usage, Facebook will be able to provide these groups with extra insight into how it will actually work.

The next step then will be to integrate Messenger, WhatsApp and Instagram messaging into a single, cross-connected platform, Facebook's next big messaging play. That integration may also make it harder for authorities to call for a break-up of Facebook in future - if the back-end infrastructure is all based on a single platform, Facebook won't feasibly be able to break out separate elements.

And worth noting, Facebook also announced its new corporate re-brand this week, another measure to reduce the potential of a company break-up - a point that US Presidential Candidate Elizabeth Warren has been particularly vocal on.

With the 2020 election looming, Facebook knows that this is a real possibility, which is likely why it's moving to take these next steps now.