It's been a while, but Facebook appears to be, once again, returning to its test of up and downvotes on user comments.

As you can see in this image, posted by social media expert Matt Navarra, the new option, appearing in some groups, labels the up and down arrows with 'Yes'' or 'No', in response to the question:

"Is this comment valuable to members of the group?"

If you have the option in your groups, you'll see this notification in your comment streams: 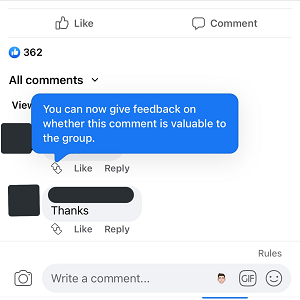 The interconnected arrow icon is a new format for the option, while Facebook also allocates a point system for your response, though it doesn't register which members of the group have voted. 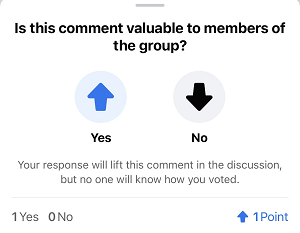 Facebook has tried to integrate up and downvotes on comments several times over the past few years, in varying forms and applications.

Back in 2018, in an interview with Medietrends, Facebook’s then head of News Feed Adam Mosseri said that they were looking to implement up and downvoting for comments, which would be the closest thing to a 'dislike' option that Facebook users would get.

“I think it’s quite likely that we’ll do it. The question is exactly how”

Mosseri credited Reddit for popularizing the up and downvote option for uncovering the best comments, and therefore maximizing engagement, and shortly after this, Facebook began experimenting with the option in general comments, in a couple of formats. 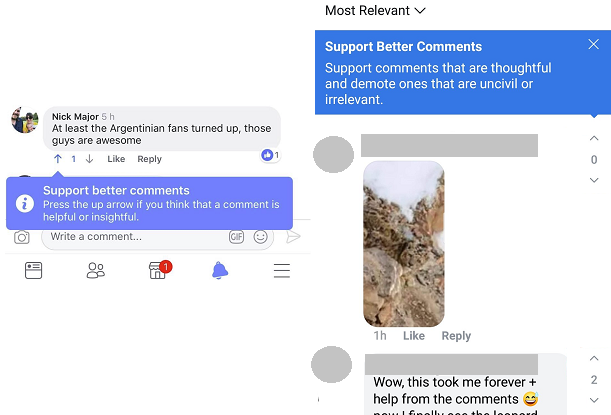 Facebook tested the options with users in Australia and New Zealand, but just as quickly as it came, it seemed to disappear, despite Facebook seemingly being quite keen to push ahead with the option as a means to surface more engaging, responsive discussion points.

Maybe, Facebook has been holding off on the next stage of the test till the US Election. The risk with up and downvotes, for whatever purpose Facebook might communicate as their intention, is that they'll be used as a dislike option, with people voting comments down simply because they don't agree, which can then be used to silence dissenting opinion.

Releasing that ahead of a divisive US election, when Facebook is already under intense scrutiny over the role it plays in spreading misinformation, and fueling certain movements, likely wouldn't be great timing for The Social Network.

Maybe that's why we've not seen anything more on the option till now, but it looks like Facebook's running a limited test within groups to see how users respond to the option to boost certain responses within the stream.

Will it be used as Facebook says, as a means to highlight valuable comments to group memebrs, or will we see people simply using them as 'approve' and 'disapprove', or 'agree' and 'disagree' options, as they're used on Reddit? I'd say the latter is what will happen, but that could still help to elevate relevant replies, and prompt even more engagement within groups.

If you're getting a lot of comments, that could definitely come in handy, providing more ways for users to interact with the stream, and add their own replies to popular responses.

It may also prompt more users to comment simply because they can get those upvotes of approval, and the dopamine rush that comes with them. There's a lot of ways that the option could be beneficial on Facebook - but then again, as Slate noted on the initial test back in 2018:

"With its anonymity and reliance on mob rule, it’s the perfect feature for trolls and bots, lefties and conservatives - the whole menagerie of internet creatures - to silence opinions through effective organizing and well-policed echo chambers."

It could end up making Facebook even more dangerous in this respect. We'll have to wait and see whether Facebook looks to roll the option out to more groups, or more comment surfaces.