With the US Election campaign set to shift into high gear, Facebook has announced a new set of civic engagement tools as part of National Voter Registration Day.

Facebook has already launched its Voting Information Center, which puts up to date voting news at the top of user timelines in the US. And now it's looking to prompt more people to the polls with new stickers, information pushes and expanded election information updates. 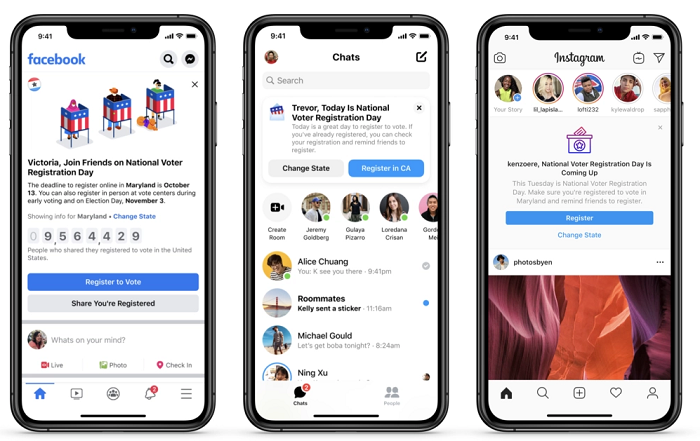 As you can see, the new prompts include a prominent 'Register to Vote' CTA, which should get more Facebook users to register their interest.

Facebook says that around 39 million people have visited the Voting Information Center thus far, with 2.5 million registering to vote via Facebook, Instagram and Messenger. Facebook's end goal is to get an extra 4 million people to the polls, so by these stats, it's well on the way.

What impact that will have on the final result, no one knows for sure, but Facebook is keen to ensure that it's doing all it can to let everybody have their say. This is largely the basis of Facebook's stance on political speech on the platform - Facebook doesn't feel that it should remove posts from political leaders, because it's up to the people to read what they have to say, and decide with their votes.

By actively promoting civic process, Facebook is aligning with this broader approach.

The #PledgeToVoteChallenge on Facebook will enable Facebook users to show that they’re planning to vote, and tag their friends to get them to join in, while new sticker packs for Messenger and Instagram Stories will look to underline the same.

Such pushes can be particularly effective - back in 2010, Facebook estimated that it got around 340,000 extra people to take part in the US Congressional elections because of a single election-day Facebook message.

The most effective tool in this experiment was a 'social message' which showed images of friends who'd voted (bottom example below).

Facebook says that the top prompt had little impact, but the social variation - essentially using a form of peer pressure - incited more people to take part. Which is why its new sticker push could be significant - even if it seems like a fairly light-hearted element.

In addition to this, Facebook's launching a new, national campaign called “More Questions, More Answers”, which will encourage people to visit and use its Voting Information Centers to ensure their vote is counted.

The impact of Facebook's efforts shouldn't be underestimated in this respect, with its massive reach enabling it to provide relevant voting information to millions of potential voters, while similar pushes on other platforms like Twitter and Snapchat will also likely boost voter turnout, enabling more Americans to have their say on the next president.

It's an unusual year, and the voting process will be equally unusual, so it's important that voters do have access to accurate, up to date information - while Facebook's also working to protect users from misinformation, which may prevent them for heading to the polls.

This is an important initiative, and Facebook is going to be scrutinized over its election approach, regardless of the result. Hopefully, this will get more people engaged in the November poll.